After renovation, Hoops Hall ready to show off its new look 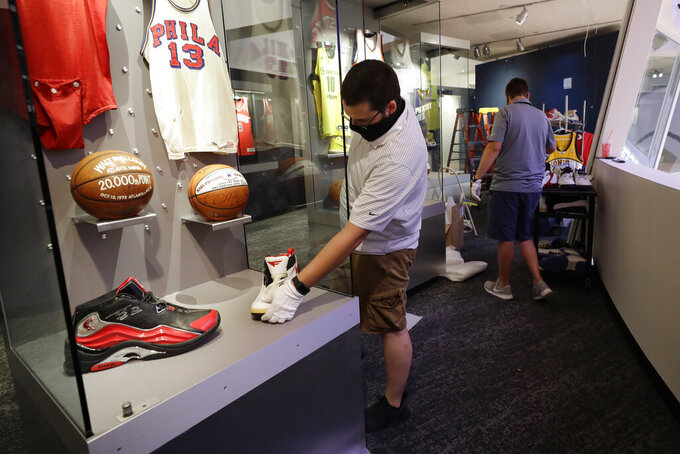 Alex Pedro, front, a curatorial assistant at the Naismith Memorial Basketball Hall of Fame, places a basketball shoe once belonging to Los Angeles Lakers' Kobe Bryant into an exhibit at the museum, in Springfield, Mass., Tuesday, June 23, 2020. The museum is scheduled to reopen in the beginning of July 2020 with a whole new look after a $22 million renovation. After delaying the unveiling because of the coronavirus pandemic, the building will reopen with new social distancing measures in place. (AP Photo/Steven Senne)

SPRINGFIELD, Mass. (AP) — Workers wearing black masks and white gloves move through the corridors of the Naismith Memorial Basketball Hall of Fame, pushing a cart loaded with high-top sneakers from some of the sport’s biggest stars.

The staff is putting the building back together after a $22 million, top-to-bottom renovation that ended during a pandemic that is forcing the hall to rethink what a museum can be. Visitors will notice the changes -- not just the new items and the way they are displayed, but also the ways the hall is being retrofitted for the coronavirus era.

“We will be opening up with a 100% new, complete experience,” hall President and CEO John Doleva said. “We’ll see what level of travel people have (in mind), in terms of jumping in the car and where they’re going to want to go first. We really want to be one of the first things on their list.”

Originally scheduled to come back online May 1, the hall pushed the date back to July because of the coronavirus outbreak. Massachusetts Gov. Charlie Baker on Thursday cleared the state to move on to Phase 3 of the reopening plan, which includes museums, and the new hall will welcome its first visitors on July 8.

The hall has used the extra time to get ready.

Staff returned to the building last week for the first time in months for training on the new exhibits and procedures.

Among the changes designed to limit the spread of COVID-19 are timed tickets that will limit crowds in the 80,000 square feet of exhibits. A theater that used to have a capacity of 196 people will be limited to 29, with seats marked to facilitate social distancing.

Hands-on displays are now hands-off: Visitors will be given stylus pens so they don’t actually have to touch the touch screens; some displays are covered in plexiglass. Cleaning crews will disinfect other high-touch areas, including the basketballs that fans can use to shoot at peach baskets like the ones James Naismith nailed up in 1891 at a Springfield YMCA.

“When this museum was designed, it was very digitally heavy and very touch screen based, which is incredibly exciting for the visitor,” said Jason Fiddler, a hall vice president who gave a reporter a tour last week. “But in terms of safety precautions with COVID-19, obviously that poses some significant challenges.”

It’s not just the infection control measures that are new.

In place of the plaques covering the building's dome — the centerpiece of the old museum tour — inductees now have their names etched on glass panels in a Hall of Honor. Forty monitors show video and photos, while four touchscreens allow fans to pick Hall of Famers and go deep on their career.

On the center court, where visitors can shoot baskets on hoops from different eras, the hall has added a second replica of Naismith’s peach basket. A 14-by-24-foot LED screen plays buzzer beaters and other memorable moments on a 15-minute loop.

Elsewhere, items like an original pair of Air Jordans share space with Dennis Rodman’s boa and Lou Carnesecca’s sweater. An exhibit on moves features the crossover dribble, the skyhook and now the Eurostep. Among the artifacts in the “Cinderella Story” exhibit is the jersey that senior guard Jairus Lyles wore in 2018 when Maryland-Baltimore County beat Virginia to become the only 16th seed to win in the NCAA men’s basketball tournament.

A section of the Utah Jazz floor where Michael Jordan made his last shot with the Chicago Bulls, a game-winner to clinch the 1998 NBA title, is now out front.

“It’s never really had its own exhibit before,” Fiddler said. “I think people who had been here before might not have even noticed it.”

Jordan had his own room in the previous layout; the new design gives that honor to Kobe Bryant, a Class of 2020 inductee who died in a helicopter crash in January. (The enshrinement ceremony for Bryant and his class has been postponed because of the pandemic.)

The goal for such standalone displays is to turn them over every few years or so. That could keep the Bryant exhibit in place until right about the time LeBron James is up for a enshrinement, Fiddler noted.

“Without knowing who will be inducted in future years, there may just be others that have the same opportunity,” he said cautiously. “His career and impact on the game has certainly proven itself worthy.”