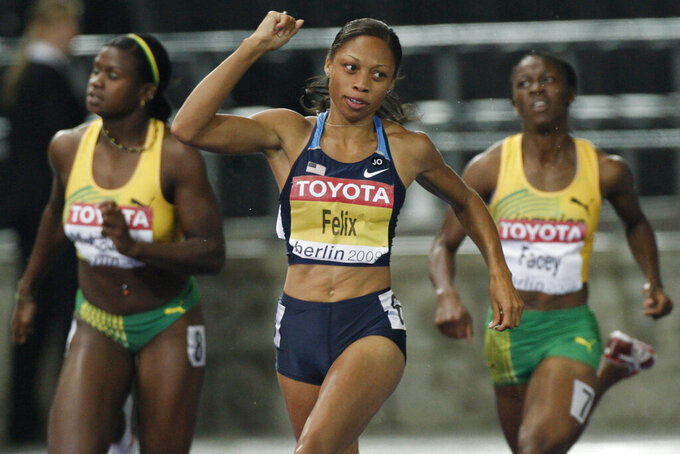 FILE - Allyson Felix of the United States reacts after winning the gold medal in the final of the Women's 200m during the World Athletics Championships in Berlin, Friday, Aug. 21, 2009. Felix, retiring after the 2022 world championships in Eugene, Oregon, is looking forward to a much slower pace. (AP Photo/Michael Probst, File) 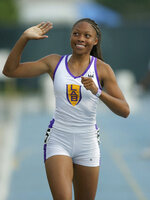 EUGENE, Ore. (AP) — Before crossing the finish line for the very last time in a career that made her America's most decorated sprinter, Allyson Felix was interested in something far more leisurely — a stroll down memory lane.

She flashed back to the time when she was a shy 17-year-old sprinting prodigy, with Olympic and world-championship glory still only a hopeful vision.

She wondered: Would teenage Allyson have imagined that by the time she reached 36, and was getting ready for her very last race at the world championships in Eugene, Oregon, she would have accomplished this much — inside and outside of her lane?

Felix certainly found her speed on the track and, later, her voice away from it. She's starred in big stadiums worldwide — 29 Olympic and world-championship medals — and stared down Nike on pregnancy issues during her journey toward becoming an advocate for women's rights.

On Friday, after a 4x400 mixed relay, Felix will bid farewell to the track scene. She might even take off her Saysh shoes — her new company — and leave them on the track.

One last symbolic gesture to bring home one unmistakable message — she left a powerful footprint.

“I’m super-proud of all the stuff that’s happened on the track,” Felix said in an interview with The Associated Press. “But I think my biggest accomplishments are the things that didn’t necessarily get a medal."

She's looking forward to a much slower pace. Like taking her daughter, Camryn, who turns 4 on Nov. 28, to soccer practice.

“Excited for all the normal things — things that might seem boring to some," said Felix, who is from California. "I’ve grown so much from that teenage girl who started out and was so shy. I never would have imagined this: Running into my 30s. That would’ve felt ancient at 17 years old.”

Since turning pro out of high school, she’s been all about training and racing. Just trying to coax a little more speed out of her lanky frame, which earned her the playful nickname of “Chicken Legs." She won gold in her signature event, the 200 meters, at the 2012 London Games — one of her 11 Olympic medals. She's earned plenty of hardware as part of relay teams, too, and is favored to help bring home another Friday (she didn't qualify in an individual event).

“There’s nothing like standing on the line and knowing that you’re going to find out who’s the fastest on that day,” Felix said.

No doubt, she's in G.O.A.T. territory — greatest of all time. Right up there with track royalty such as Usain Bolt, Carl Lewis, Jesse Owens, Michael Johnson, the late Florence Griffith Joyner and Jackie Joyner-Kersee.

“Her connection to the sport transcends being a fast runner,” said Joyner-Kersee, the Hall of Famer whose husband, Bobby Kersee, has been a longtime coach to Felix. ”We’ll miss her presence on the field. But her heart and soul will always be connected to the sport. That will never be lost or forgotten."

What Felix won’t miss is easy: Coach Kersee’s intense workouts. Just the other day, he put her through one final grueling training session.

It included a 500-meter all-out sprint. Felix collapsed in exhaustion at the end.

“I don’t care for anything where you have to pass the starting line," Felix cracked.

She always had the platform but was hesitant to use it through most of her career. She didn’t want to ruffle feathers.

Not anymore. Not since a complicated pregnancy, when she dealt with preeclampsia and underwent an emergency C-section to deliver Camryn.

Her deal with Nike ran out in December 2017. She explained in a New York Times editorial piece a few years ago that Nike wanted to pay her 70% less. Although she was willing to accept a reduction, she wanted assurances around maternity. It was declined.

She followed the likes of runners Alysia Montaño and Kara Goucher in speaking out about the need for sponsors to support female competitors before, during and after pregnancy — that contracts shouldn’t penalize someone for starting a family. Ultimately, the stance led to change. Nike later announced it planned to alter contracts so female athletes weren’t penalized for having babies.

Felix counts that as one of her biggest wins. She's also spoken on Capitol Hill about overcoming racial gaps in the maternal mortality crisis.

“This is something where lives could be changed by and affected by,” Felix said. "That was really big for me.”

Same with this — starting the footwear company Saysh, which was created for women. In Tokyo, she earned a bronze medal in the 400 while wearing spikes she envisioned.

That bronze, for all it symbolized, meant just as much to her as gold.

“It was really bigger than just the medal or the time or any of that," she said. "It was actually a huge accomplishment for me to make it to that (Olympics) and to be able to talk to so many people who said they saw themselves in me.”

She has certainly inspired the next generation.

"There’s nobody like her," said 24-year-old sprinter Kaylin Whitney, who is in the women's 4x400 relay pool. “She’s been in the sport for so long, and I’ve yet to hear one negative thing about her. You never will. She’s just that type of person where she does everything and anything for the sport.”

The reason for her retirement is straightforward: She's 36 now and simply didn't have the same fire (or speed) with the finish line in sight.

“To be at the top, you have to have that hunger," Felix said.

That hunger now lies elsewhere: With growing her company. With being a champion for women's rights. With raising Camryn.

Felix recently took a photo with her daughter. She wore her racing outfit and Camryn an apropos shirt. It simply read: “My mom is faster than your mom."