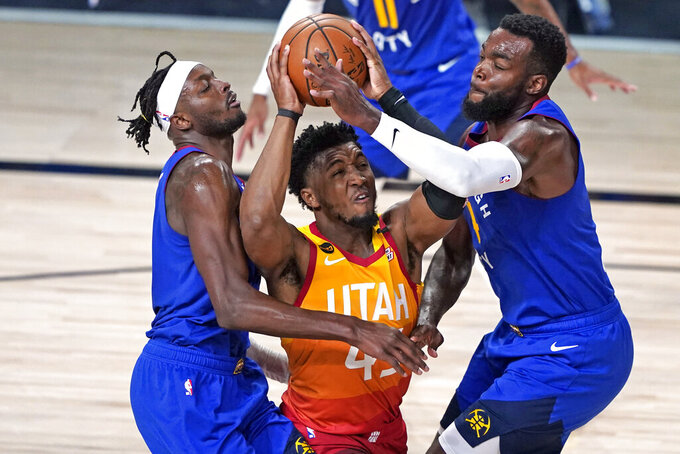 NBA players who test positive for the coronavirus this season may have to miss nearly two weeks in some instances before being allowed to return to the court, the league told its teams Saturday.

That revelation was one of many in a 63,000-word document, a copy of which was obtained by The Associated Press, that explained some of the heath and safety protocols for the looming season. Preseason games begin Dec. 11 and regular-season contests start Dec. 22.

The document still needs to be ratified by the league and the National Basketball Players Association, but it at least provides some sort of blueprint for the start of training camps in the coming days. All players who will be part of training camp need to begin a testing program by Monday — many were expected to start it Saturday — and teams can begin holding mandated group workouts starting Dec. 6, the league said. Individual workouts can begin Tuesday, if players have three consecutive negative tests.

Players, coaches and other key staff are expected to be tested daily in most cases.

The league, in a separate memo, also told teams that even with the detailed prevention and mitigation strategies “it is likely that some staff, players and other participants in the 2020-21 season nonetheless will contract COVID-19.” The league urged teams to have plans ready to assist visiting team personnel or referees who happen to test positive away from their home cities, such as directing them toward isolation accommodations if necessary and to assist with that person’s care while recovering.

“The NBA wouldn’t have put this plan together and we wouldn’t have agreed to it if it wasn’t safe,” Utah guard Donovan Mitchell said Friday, before the protocols were given to teams. “We did a great job with the bubble and we’ll do what we feel is safe, the PA and the NBA.”

Mitchell — who tested positive for the virus shortly after the league suspended last season on March 11, after Jazz teammate Rudy Gobert was the first NBA player known to have contracted COVID-19 — also said that he expects players to take the virus very seriously, especially since a positive test almost certainly would sideline someone for several games.

There are two methods by which a player can return to play after a positive coronavirus test: one is a test-based resolution, in which an infected individual has at least two consecutive negative PCR test results. The other is a time-based resolution, where a player would have to isolate, rest and avoid workouts for at least 10 days and then spend at least two more days training in isolation. He would also have to undergo cardiac screening before being cleared to return.

The league is still working with the union on specific protocols for life on the road, saying it wants to find ways to “promote more controlled environments and reduce nonessential interactions.” Teams will be urged to work with hotel vendors on best practices, such as face-mask usage and physical distancing, especially from people who are not part of a team’s travel party — which will be capped at 45 people, including players, coaches and staff.

There is a possibility that the league will have teams travel with someone whose specific task is to handle testing on the road. Those people — it may be one, it may be two — would not count toward the 45-person travel party total.

No players or coaches tested positive for the coronavirus after gaining entry to the NBA’s restart bubble that housed more than three months of practices and games at Walt Disney World near Orlando, Florida, from early July through mid-October.

But with no bubble, the risk of exposure and positive tests is obviously much higher. Virus figures around the world have been soaring in recent weeks, including in many U.S. cities; the number of new COVID-19 cases reported in the U.S. reached 205,557 on Friday, according to data from Johns Hopkins University.

That marked the first time the daily positive test-reported figure topped the 200,000 mark. Some NBA teams have already said that they intend to open the season without fans in the stands, the defending champion Los Angeles Lakers among them.