Analysis: Even the NBA trade deadline has a different feel 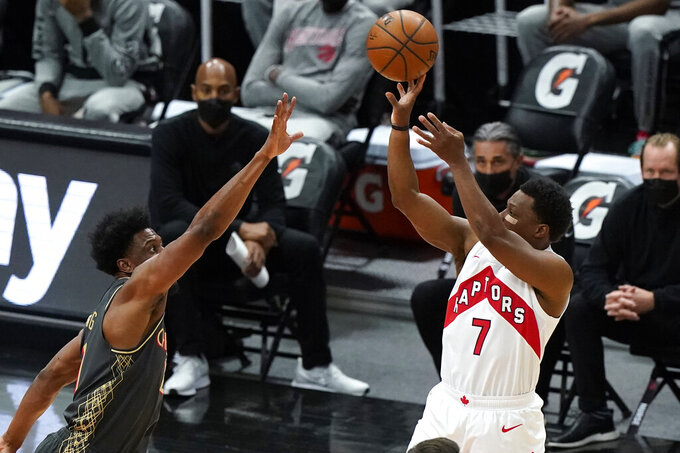 If these were normal times, the Toronto Raptors would probably be on the cusp of trading Kyle Lowry to a contender right about now. They’re 11th in the Eastern Conference, losers of five straight games, Lowry is a championship point guard who would make any team better and his contract is expiring.

Thing is, these are not normal times.

The Raptors have shown no desire to move Lowry, in part because they still very much remain in the playoff mix and soon they'll get five players back after missing time for virus-related reasons. Pretty much every team, apologies to maybe Detroit and Minnesota, are also realistically in the postseason mix. Such is a byproduct of the new play-in round meaning that 10 teams from each conference will have games after the regular season ends this year, instead of the usual eight.

That means even the trade deadline might have a different feel this year — keeping with the theme of just about everything else in the league also changing this season, with a shorter schedule, barely any fans at games, testing multiple times a day and tons of rules designed to keep everyone safe.

This year, there will be buyers. What’s unclear is how many teams will be willing sellers by March 25.

“The greatest day of the year,” Lowry said.

It’s already an unusual season, in that significant names were put onto the market openly and long before the deadline. Blake Griffin and Detroit worked out a buyout, allowing him to join the Brooklyn Nets. DeMarcus Cousins was let go by Houston and became a free agent. P.J. Tucker’s time with the Rockets appears to be over, LaMarcus Aldridge and San Antonio are parting ways and Cleveland has been trying to find a new home for Andre Drummond for weeks.

Eventually, there will be takers. And as the trade deadline looms just about a week away, expect chatter to pick up considerably.

The defending champion Los Angeles Lakers might want a big man to provide some insurance just in case Anthony Davis doesn’t return at 100%. The Los Angeles Clippers have been shopping for a point guard and a wing pretty much all season. Brooklyn isn’t believed to be done tinkering with its lineup yet. Boston needs a big man. Miami could use more size. Same goes for Philadelphia, especially if Joel Embiid is going to be out for more than just a few games.

They’ll all try to make deals. Every general manager in the league is trying to make deals; that’s what they do. The challenge this year will be to find willing participants, especially if the team on the other end of the phone still considers itself in the playoff race or at least the race for a play-in tournament spot.

“I also think there are more factors this year because of the condensed schedule,” Orlando coach Steve Clifford said. “I mean, if you hit it right — we haven’t yet — but if you hit it right, regardless of what your schedule looks like ... you have a chance.”

The Magic are freefalling. They’ve lost eight in a row, are next-to-last in the East at 13-26 — yet are just five games out of that 10th spot and a berth in the play-in round. Again, in normal times, they would be probably unloading some of their key players right now; Nikola Vucevic, Aaron Gordon, Evan Fournier and Terrence Ross would all generate interest from a lot of clubs.

In a coronavirus-dominated season, odds are that teams will go through what Toronto is going through now with five players sidelined for positive tests or contact tracing. If a team or two ahead of Orlando gets into one of those predicaments, the standings could change quickly. And that condensed schedule, jampacked to the point that teams can barely even practice anymore, is something else to consider as far as having potential to make little issues turn into big problems.

“Guys aren’t going to be able to play every night here as we’re going forward,” Clifford said. “And I think that, with all the different factors, make this league even more complicated than it normally is.”

Put simply, the decisions some teams will have to make on whether to buy or sell will be more difficult than usual.

Time is running out for them to make up their minds.