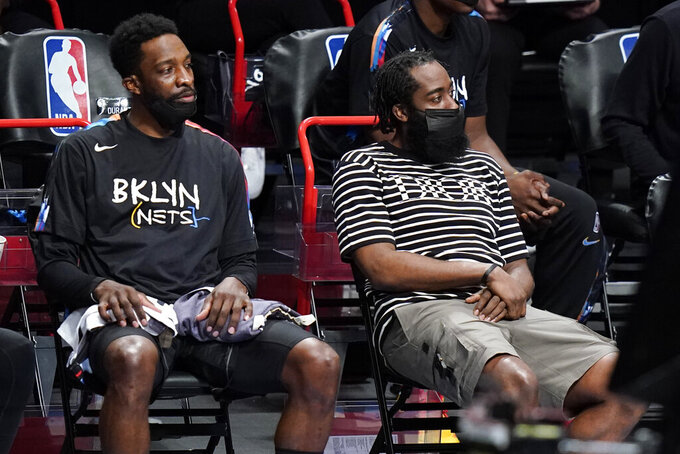 As teams gear up for the stretch run of the NBA regular season, it’s injuries to key players — not just their unavailability due to COVID-19 — that is having the biggest effect on the playoff race in both conferences.

Still, preparing to play outside of the controlled atmosphere of last season’s Florida bubble has helped teams brace for the unexpected.

When the NBA season tipped off in December, keeping players healthy as they traveled during the pandemic was the chief priority around the league. In the four months since then, virtually every team has made adjustments to their rotation because of league-wide health and safety protocols.

“With COVID and with the way the season has gone, everybody’s missing games,” 76ers center Joel Embiid said. “COVID has affected the whole league. … It’s hard to kind of figure out when the team is at their best.”

Lately, it's been injuries and not the virus that has dictated how the season has gone.

That starts with the defending champion Lakers, who continue to be without team cornerstones LeBron James and Anthony Davis with no clear idea of when they will return.

Davis was averaging 22.5 points and 8.4 rebounds through 23 games when he strained his right calf Feb. 14 against Denver. He hasn’t played since, a span of 25 games entering Monday. He is expected to get re-evaluated this week.

James’ sprained right ankle has kept him sidelined since March 21 and he could be three more weeks from returning. It stunted a 41-game start in which he was averaging 25.4 points and 7.9 assists and rebounds per game.

Another blow was dealt to Western Conference contender Denver, which learned Tuesday that its versatile point guard Jamal Murray would be out indefinitely with a torn ACL in his left knee. Murray was injured late in a loss to Golden State Monday night. The Nuggets were looking to again be a legitimate threat a season after making to the conference finals.

The story is just as fascinating in the topsy-turvy and increasingly tightening East, where almost every team in the playoff mix has players currently on — or just getting off — the injury report.

Philadelphia and Brooklyn began the week tied at atop the conference at 36-17, with Milwaukee (33-20) three games back.

But things could certainly change in a hurry.

Milwaukee’s Giannis Antetokounmpo missed his fifth straight game Sunday with a sore left knee and currently has no timetable for return.

The Nets seemed to be getting back to full strength earlier this month when Kevin Durant returned to action after a 23-game absence due to a strained left hamstring. Then James Harden went down with a right hamstring on April. 5.

He’s missed Brooklyn’s last two games and was expected to miss at least 10 days recuperating. That could mean he won’t be available for matchups this week when it visits Philadelphia on Wednesday, host Charlotte on Friday and visit Miami on Sunday.

All three of those opponents are dealing with their own health issues.

Embiid proclaimed “I’m back” to 76ers coach Doc Rivers last week following a 35-point performance against Boston in only his second game back from a 10-game stint in the injury report because of a bone bruise in his left knee.

While the return of players like James and Davis will provide an instant lift for a Lakers offense that runs through them, the integration process is trickier for other teams.

Rivers said he expects there will still be some growing pains for his team as a whole as they adjust to playing with Embiid again.

“When you get a player like Joel back and you throw him into your offense, it’s actually going to create some short time rhythm problems,” Rivers said. “We have to try to win games still and get his rhythm back at the same time.”

In Los Angeles, the Lakers hope that process will be a short one.

It won’t keep the Lakers from qualifying from the playoffs, but could make for a more difficult route to get back to the NBA Finals.

Who gets healthy the fastest and who adjusts the quickest will likely determine who walks away with the championship trophy in July.