Another gold, 1-2 finish for China in Olympic diving 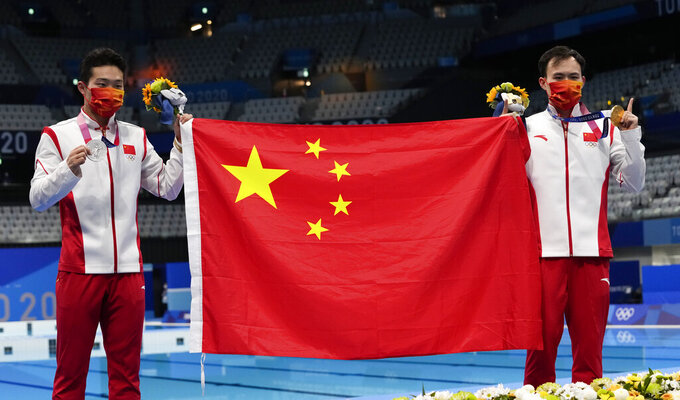 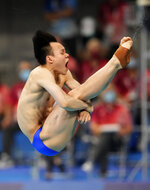 TOKYO (AP) — Before his final bounce off the board, Xie Siyi felt like he was in a movie.

The scenes of his life flashed before him.

Then, he pulled off the dive of his life.

The Chinese divers held the top two spots after both the preliminaries and the semifinals, and it was more of the same in the finals.

Xie broke down in tears when the scores for his final dive were posted, a string of 9.0s and 9.5s that clinched the victory with 558.75 points. Wang came over to give his teammate a hug.

“I felt like I was in a movie,” Xie said through an interpreter. “All the scenes of my life were flashing in my mind.”

He couldn't remember being so emotional after a competition. There were a few tears after he won the first of two straight 3-meter world titles in 2017, but nothing like this.

“It was very stressful,” he said. “I feel like it was all a dream.”

The biggest drama was for the silver, but Wang nailed his final dive to finish with 534.90 points.

Laughter was only 2.05 points behind Wang going to the final round but over-rotated his entry a bit on his highest-difficulty dive, a forward 2 1/2 somersaults with three twists. The telltale splash left him with 518.00 points and the bronze.

Wang sliced through the water, barely rippling the surface.

Laugher has won a medal on the springboard at the last two Olympics, having claimed a silver at the 2016 Rio de Janeiro Games. But it was hardly an easy road to another medal.

At the 2019 world championships, while leading on the springboard, Laugher was suddenly stricken with the same issue that plagued gymnastics star Simone Biles at the Tokyo Games.

Suddenly losing a sense of where he was while flipping and spinning through the air, he slipped to third behind Xie and another Chinese diver.

“This medal is redemption for my past mistakes,” Laugher said. “Getting on the podium is everything.”

Long the world's dominant diving nation, China has been near-perfect at the Tokyo Aquatics Centre with five gold medals in six events. The only slip came in men’s 10-meter synchronized, where Chen Aisen and Cao Yuan settled for silver in an upset win by the British team of Tom Daley and Matty Lee.

Otherwise, the Chinese have captured every medal available to them. They won the other three synchronized events and have gone 1-2 in the first two individual events of the Tokyo Games.

Xie and Wang added to the gold they won in 3-meter synchronized.

“In my country, the gold medal is important,” the 25-year-old Xie said.

The most touching moment came when Ken Terauchi of Japan, just four days shy of his 41st birthday, completed the final dive of his sixth Olympics.

He failed to win Japan's first diving medal ever, finishing last in the 12-man final. Still, Terauchi bowed reverently toward the pool and received a standing ovation from all the coaches and competitors in the nearly empty arena.

Afterward, he hung around to pose for pictures with everyone who wanted one.

“A lot of people were watching today,” Terauchi said through an interpreter. “I feel sad and disappointed with the results.”

Rommel Pacheco also bid farewell to the board after his fourth and final Olympics.

The 35-year-old Mexican, who first competed at the 2004 Athens Games, plans to go into politics after his sixth-place showing in Tokyo. Over his long career, he won three medals at the world championships along with three golds at the Pan American Games, the first in 2003.

The Americans were hoping to claim their fourth medal of the Tokyo Games, which would match their best output since 1988. But Andrew Capobianco, a silver medalist in 3-meter synchro, finished 10th.

“It didn't go as well as I hoped,” said Capobianco, who has battled a back injury but did manage a silver in the 3-meter synchronized. “It was a little bit of a struggle mentally and physically.”