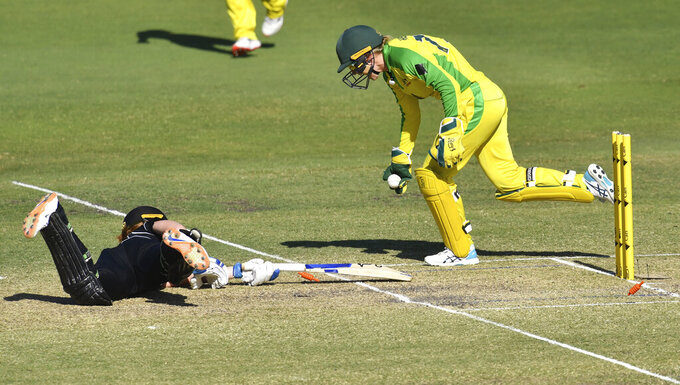 Even with skipper Meg Lanning on the sidelines and star allrounder Ellyse Perry not playing the series because of injury, the top-ranked Australian women produced their biggest ODI win over New Zealand to cap the milestone.

The uncertain wait over when Lanning's lineup will get the chance to break the record starts now, with doubts over a tour to Australia by India's women's squad this southern hemisphere summer and a trip to New Zealand because of travel restrictions in place for the COVID-19 pandemic.

“It’s nice to finish off with a big win today,” said Lanning, who missed Wednesday’s game because of a hamstring injury sustained while scoring an unbeaten century in Australia’s series-clinching win on Monday. “It’s a really special effort, especially over a long period of time.

“To win 21 on the trot is a great effort and something we’re really proud of.”

Unlike Ponting's men's team, which won 21 straight ODIs within five months, including the 2003 World Cup in South Africa, scheduling means the women's team has had to remain unbeaten since October 2017 to match the mark. The winning streak started in India in March 2018 and also included series wins over Pakistan, England, West Indies, Sri Lanka and New Zealand.

The Australians clinched this three-game ODI home series against New Zealand with a narrow win in game two but, with the milestone in mind, didn't ease up at all after being sent in to bat in game three.

Australia's total of 325-5 virtually took the game away from New Zealand, which needed the biggest successful chase in women’s ODI history to secure an unlikely victory.

Stand-in captain Rachael Haynes led the way, posting 96 from 104 balls and sharing a 144-run opening stand with Alyssa Healy, who scored an entertaining, run-a-ball 87 including 13 boundaries and a six.

The New Zealanders were bowled out for 93 in 27 overs, with only Amy Satterthwaite (41) and Maddy Green (22) reaching double figures after skipper Sophie Devine was dismissed by Megan Schutt in the first over for a first-ball duck. Schutt, Jessica Jonassen, Ash Gardner and Sophie Molineaux took two wickets apiece.

Unlike Australia's win over India in the women's Twenty20 World Cup final in March, with more than 86,000 fans at the Melbourne Cricket Ground, the milestone ODI victory at Allan Border Field on Wednesday drew a crowd of about 300, with the capacity limited by restrictions in place for the coronavirus pandemic.

Some fans soaked up the sun in fold-up chairs near a green-and-gold banner that read “The history books are rewritten,” and others lazed on the grassy bank under the shade of trees that hung over the temporary fencing behind the boundary.

A little further away but still within sight of the wicket square, Australian fast bowler Mitch Starc was going through his paces in the practice nets as his wife, wicketkeeper Healy, was helping the Australian women's team to victory. Starc is likely to be back in action for the men's team next month when the home summer starts.

The women's players will go to their respective clubs for domestic Twenty20 tournament and will have to wait to find out when they'll reassemble as a national team.

The space and time might give Haynes, one of four players involved in all of Australia’s 21 wins during the successful run, a chance to think about how the women's streak compares with men's squad of 2003.

“I definitely followed the men’s side when I was growing up. They had a pretty extraordinary period of success, so I think to hear our group be compared to that is really special,” she said. “When you are playing in it, it’s hard to get your head around how significant it is, but it won’t be lost on us. I am sure it is something that we will reflect on and celebrate in due course.”