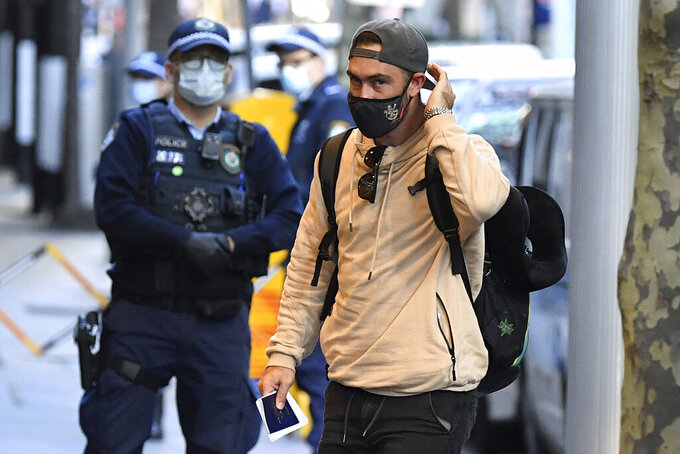 SYDNEY (AP) — Fast bowler Pat Cummins was among the first cricketers released from quarantine on Monday, two weeks after returning to Australia following the suspension of the Indian Premier League.

The Australian Broadcasting Corp. showed broadcast vision of Cummins reuniting with his pregnant partner, Becky Boston, for the first time since early April.

Cummins, Steve Smith, David Warner and Glenn Maxwell were among the 38 players, coaches or broadcasters who underwent a mandatory 14-day quarantine in a downtown Sydney hotel.

Another pace bowler, Jason Behrendorff, told the ABC it was “nice to have some fresh air” after leaving hotel quarantine.

India is “obviously going through a lot which is really sad to see, so its’ tough to be there in that time," he said, "but also very relieved to get home.”

The IPL was postponed indefinitely on May 4 after players or staff from at least three of the eight franchises returned positive tests for the coronavirus.

The timing left Australian players, coaches and commentators in limbo because the government had temporarily barred incoming travelers from India.

Most of the Australians relocated to the Maldives and waited for the travel ban to be lifted before getting a charter flight home.

The players in the IPL work on individual contracts and the league is not part of their obligations with the national team. Australia's next international tour is to the West Indies in July for a series of limited-overs matches.

The Board of Control for Cricket in India announced on the weekend that the remainder of the IPL, the world's richest cricket league, will be held in the United Arab Emirates in September and October.

India is scheduled to host the Twenty20 World Cup in October and November, with the U.A.E. selected as a backup venue if required.