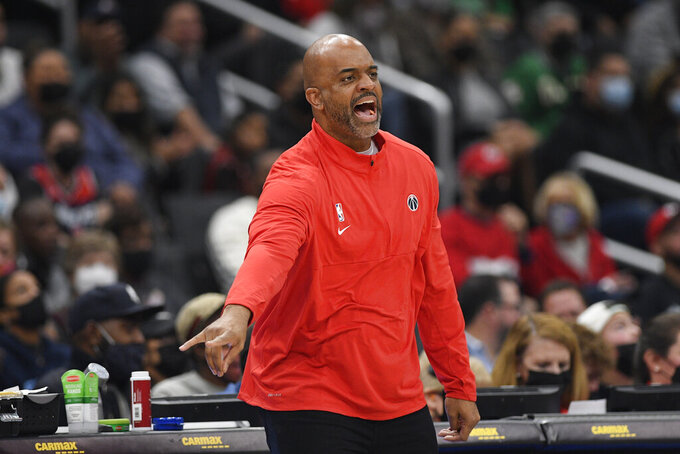 Montrezl Harrell added 20 points and 14 rebounds before fouling out in the second overtime for Washington, which improved to 5-1 with its second victory over Boston in three games.

“We're just having fun, man” Beal said of a team that was dramatically restructured in the offseason. “We embrace each other on the daily. And it's amazing to be where we are. But ... we have that humble and hungry mentality. We haven't scratched the surface yet.”

Spencer Dinwiddie added 20 points and sank the final Washington basket as the Wizards overcame 36.5% shooting (38 of 104) for their second overtime win of the season.

“It just shows our resilience,” Washington coach Wes Unseld Jr. said. “I keep using that word, but it's who we are and who we have to be. And every night somebody else finds a way to step up and make a play for us.”

Jaylen Brown had 34 points for the Celtics, who lost for the second time in three overtime games this season to drop to 2-4. The Celtics, who are in a similar period of transition to Washington without the early success, played only four overtime periods in all of the previous season.

“I think it shows how we’re a good team and we’re almost there,” reserve Josh Richardson said of all the overtime games. “That once we get some more continuity on the offensive side of the ball, I think that hopefully we’ll be able to finish these games out a little quicker.”

Jayson Tatum added 27 points and a career-high 15 rebounds for Boston, but made just 10 of his 32 shots. He missed all five of his 3-point attempts on a night the Celtics shot just 2 of 26 beyond the arc as a team.

The night may have yet gone Boston's way without a pivotal moment with 1:14 remaining in the second overtime.

Beal hit a runner high off the glass off the ensuing possession to give the Wizards the lead back, Tatum missed a difficult runner on the other end, and then Dinwiddie got his pull-up to fall to make it 115-112 with 20 seconds left in the second extra period.

“We wanted to get a 3 somewhere in there,” Richardson said. "But I think the Wizards guarded the play pretty well."

“We stayed composed, we stayed within each other, and we got the job done," Caldwell-Pope said.

Wizards: C Daniel Gafford (thigh bruise) missed a second game in a move designed to “give him another day, day-and-a-half to get his strength back,” said coach Wes Unseld Jr. … Kuzma hit a free throw for his 10th point with 8:05 left in the third quarter to seal his double-double.

Harrell hit a high-arching, rainbow-shaped 3-pointer from 3 feet behind the midcourt stripe that banked in to give the Wizards a 53-47 lead at the halftime buzzer. It was Harrell’s first 3 since March 2019.

Celtics C Enes Kanter wore sneakers adorned with messages asking for the 2022 Winter Olympics to be moved from China.

They read “No Rights, No Games,” “Move the Games” and “No Beijing 2022,” according to photos from a tweet he posted earlier Saturday.

It was his latest in a series of visual sneaker demonstrations against perceived human rights abuses by the government of Chinese president Xi Jingpin.