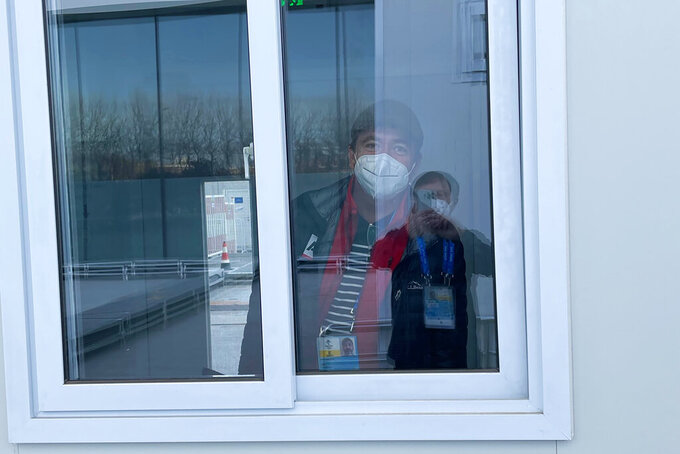 Associated Press reporter John Leicester is held in Isolation Room 2, where he was kept while being re-tested for COVID-19 after testing positive at the 2022 Winter Olympics, Saturday, Feb. 5, 2022, in Beijing. (AP Photo/Steve Moyes)

BEIJING (AP) — The phone call comes in the early afternoon, six hours or so after the mandatory morning test. The number is immediately recognizable because it's so strange: a U.S. dialing code when the Chinese health official on the line is, in fact, calling from Beijing and bearing bad news.

“Sorry to bother,” he says.

“Your test this morning was positive.”

Like laundering with gasoline or hiking naked, traveling three weeks after a bout of COVID-19 to cover the Winter Olympics in China for The Associated Press is proving to have been not the brightest of ideas. Because here the coronavirus is Public Enemy No. 1 — hunted, tracked, isolated and zapped with no-nonsense rigor and militaristic zeal.

Lurking at the back of my throat are infinitesimal remnants of virus DNA that hitched along for the ride, and which the Olympic testers in top-to-toe hazmat suits are annoyingly adept at digging out with their cotton swabs.

And that's how I ended up back here, in Isolation Room 2. For the second time in four days.

The cubicle, part of a Lego-like clump of nondescript pre-fabs outside the main Olympic press center, is roughly the size of a double bed but less welcoming.

There's a small electric heater to take the sting out of the cold seeping through the thin white metal walls. I switch it on.

There is a table and a chair. I shove them next to the electric socket, so I can power up my laptop and stay connected via Wi-Fi to the Olympic world that I can see, but am temporarily no longer welcome in, through two slit windows in the door.

Some passersby wave. Most don't even notice the person inside, confined until the result of another test determines his fate.

A positive could mean a swift transfer by ambulance to an isolation “hotel" for an indefinite stay. That's an unappetizing prospect given the complaints about lack of comfort and inedible food from quarantined athletes who've endured them. There were 32 athletes in isolation as of Tuesday this week, with 50 others having been discharged.

The ambulance is parked outside the cubicle, ready to go.

So all fingers and toes are crossed for a negative that would trigger a return to the relative freedom of the “Closed Loop." That touchy-feely moniker is actually a ring-fence of stringent restrictions sealing off the Winter Games — behind high walls, police patrols and thickets of security cameras — from the rest of China and its people who, understandably, want potential virus-carriers kept firmly at bay.

In France, where I'm based, the coronavirus no longer inspires the same levels of fear for many that it did in the pandemic's early days. The vast majority of French adults are vaccinated. There have been multiple waves, the most recent being the fast-spreading omicron variant. It swept through so many homes that more people are feeling that the worst may now be behind them. Even the kiss to both cheeks, the traditional French greeting that had become repellent to many, has made a comeback of sorts. France has lost more than 133,000 lives to the virus and counted more than 20 million infections.

Vaccination rates are high in China, too. But the ruling Communist Party has pursued a “zero-tolerance” strategy to keep COVID-19 infections low since cases overwhelmed hospitals in the pandemic's initial epicenter, the Chinese city of Wuhan. That means most people in China have never been exposed to the virus. And they don't want Olympic visitors to endanger them.

Popping my masked face briefly out of the cubicle, I ask a passing police officer if he would kindly snap a photo of me inside. He reels back when he sees the blue sign marked “Isolation Room 2” by the door. Stupid of me, really. The words spoken that same morning by Dr. Brian McCloskey, who heads an Olympic panel of medical experts overseeing the games' COVID-19 protocols, should have given me pause.

“We never relax about coronavirus,” he said at a press conference.

Only her eyes visible in a full-body hazmat suit, a tester enters the cubicle to take an oral swab. She spreads a yellow plastic bag on the floor. Swab taken, she inserts the cotton bud with my sample into a tube for later testing. The sealed tube goes into a sealed plastic bag marked “BIOHAZARD." The bag goes into a screw-top plastic canister. It then goes into a double-clamped cooler box.

The extraneous remnants of the swab stick and the wrapping it came in go into the yellow bag. She sprays it 16 times with disinfectant and scrunches it up into a tight ball that she seals with a plastic tie. It then goes into another plastic bag also sprayed, eight times, that she compresses and ties again.

At the Beijing Olympics, the key to freedom is a number: 35. That's the organizers' positive-negative threshold. The number is a measure of how closely their testing machines have to hone in on a sample before detecting virus particles. A reading below 35 triggers a positive, requiring quarantine in an isolation facility.

Since landing, I've yo-yoed above and below the red line, negative in some tests, positive in others and, at least once, just “uncertain.” Hence the two spells in the isolation chamber and others in my hotel room, waiting for results of follow-ups.

I'm far from alone. By Day 5, there have been more than 1 million tests, and 398 confirmed positives.

McCloskey says medical literature has documented cases of people testing positive as long as 109 days after an infection. His medical panel's job is to distinguish such cases from people who are newly infected and could contaminate others. They look at their patterns of tests over days or weeks, to determine whether the mouth swabs have just picked up dead remnants of virus from a previous infection or spotted a new and active case.

My phone rings again. The testing official with the strange number is on the line.

Negative, he says. Free to go.

He saved the best news for last.

To cheer me up after my in-and-out of isolation first days, he'd called my hotel to ask whether it would be possible to cook me a special dinner.

Spicy pork with scallions, and dumplings, he announced proudly. I'd previously told him when we had had a mutual gripe about food at the Olympics that they were my favorite Chinese dishes.

They were delivered to my room that night. The man wore protective overalls and visor. But my faith in humanity was restored.