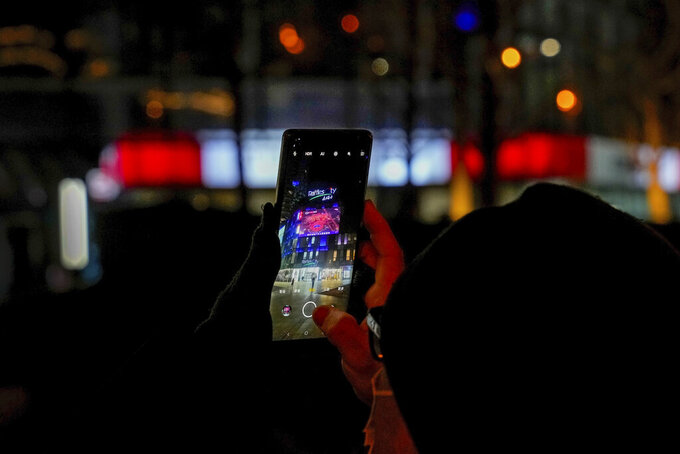 A man uses his phone to film a screen outside a mall showing a live broadcast of the fireworks explode over the iconic Bird's Nest Stadium during the closing ceremony of the 2022 Winter Olympics, in Beijing, Sunday, Feb. 20, 2022. (AP Photo/Andy Wong)

As part of the closing ceremony Sunday night for the most locked-down and sequestered Olympics in human history, a carefully curated crowd packed — well, dotted, really — the famed Bird's Nest stadium as a warm and humanistic show unfolded.

The show itself, headed by famed Chinese director Zhang Yimou, fairly burst with color and music and energy and even joy. It felt disconnected from a COVID-compartmentalized Winter Games that, despite its insistent theme of “Together for a shared future,” kept people apart by the thousands — both those inside and outside its calibrated bubble.

As the closing ceremony reached its denouement, something interesting unfolded. It was the kind of moment that has become common in the post-lighter-at-the-concert era.

Before the ceremony, the official crowd preppers had exhorted those in attendance to, at a certain moment, take out their phones. “When the Olympic flame is about to be extinguished," the emcee said, "hold up your phone, turn it on and sway to the music.”

And so they did, these carefully screened representatives of a carefully screened Games, these folks who had passed through security screenings and swabbing of their mucous membranes and all sorts of other gates and portals and checkpoints to gather here for the event that's supposed to symbolize the planet coming together in the spirit of excellence and amiable competition.

In The Era of The Phone, humanity is negotiating a new relationship with itself. But as we clutch our remarkable and terrible devices, be it swaying in unison in an Olympic Stadium or sitting alone and reaching across the ether, are we together but always apart? Or apart but always together?

The smartphone, barely a teenager in 2022, has — like many teenagers — sucked up most of the oxygen in the room. And as these Olympic faithful in the Bird’s Nest held their phones skyward to become totems of warmth and togetherness against cold and COVID, a Chinese song called “You and Me” played and the words “One World” were displayed in fireworks, it was easy to wonder: Is this now the best connection we can hope for?

Ted Anthony, AP’s director of new storytelling and newsroom innovation, is the AP’s former director of Asia-Pacific news and former China news editor and is covering his seventh Olympics. Follow him on Twitter at http://twitter.com/anthonyted