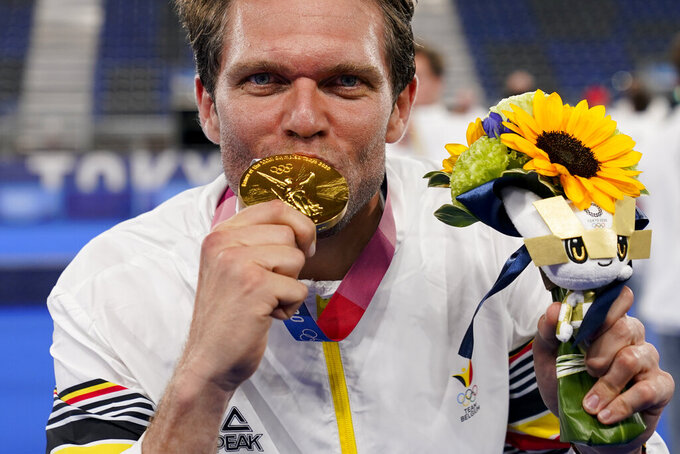 Belgium goalkeeper Vincent Vanasch kisses his gold medal after making the final save in a shootout to win their men's field hockey gold medal match against Australia at the 2020 Summer Olympics, Thursday, Aug. 5, 2021, in Tokyo, Japan. (AP Photo/John Minchillo)

TOKYO (AP) — Alexander Hendrickx scored the penalty stroke for the lead in the shootout and Vincent Vanasch got the clinching save as Belgium beat Australia to win men’s field hockey Olympic gold for the first time.

The score was tied 1-all at the end of regulation before Belgium won the shootout 3-2 on Thursday at the Tokyo Games.

Belgium had to wait an extra year to improve on its second-place performance in 2016.

“Standing on the biggest stage on the biggest podium for a small hockey country as Belgium is a crown on all the hard work,” forward Thomas Briels said. “And a lot of respect to all the teammates — we work so hard — and people behind the scenes of hockey in Belgium.”

Vanasch's final save came against Australian midfielder Jacob Whetton. Vanasch said he was confident, even after a review forced him to get the last save twice.

“I’m like a musician, it’s a rehearsal and then you come to the concert and it comes naturally,” he said. “That’s how I come on the pitch. I’m composed, but also I trust myself, I trust my reflexes and you can learn that from experience and that’s why today I did something like this.”

Hendrickx scored 14 goals in the tournament — twice as many as the second-highest scorer.

Australia wished it had taken care of business in regulation.

“It’s a tough way to lose a gold medal,” Kookaburras goalkeeper Andrew Charter said. “We didn’t want to go to shootout and we had the lion’s share (of possession) at the end. But if you let it go to shootout, it can be a bit of a coin toss sometimes."

India defeated Germany 5-4 in the bronze-medal match. It was India’s 12th Olympic medal in the sport, but its first since 1980.

India rallied from 3-1 down and fended off a German penalty corner in the last few seconds.

India’s women’s team has a chance to win a medal, too.

After finishing fourth in 1980 and 12th in 2016 in their only previous trips to the Olympics, India’s women’s team will play for bronze against Britain on Friday.