Betts homer in front of 52,078 leads Dodgers over Phillies 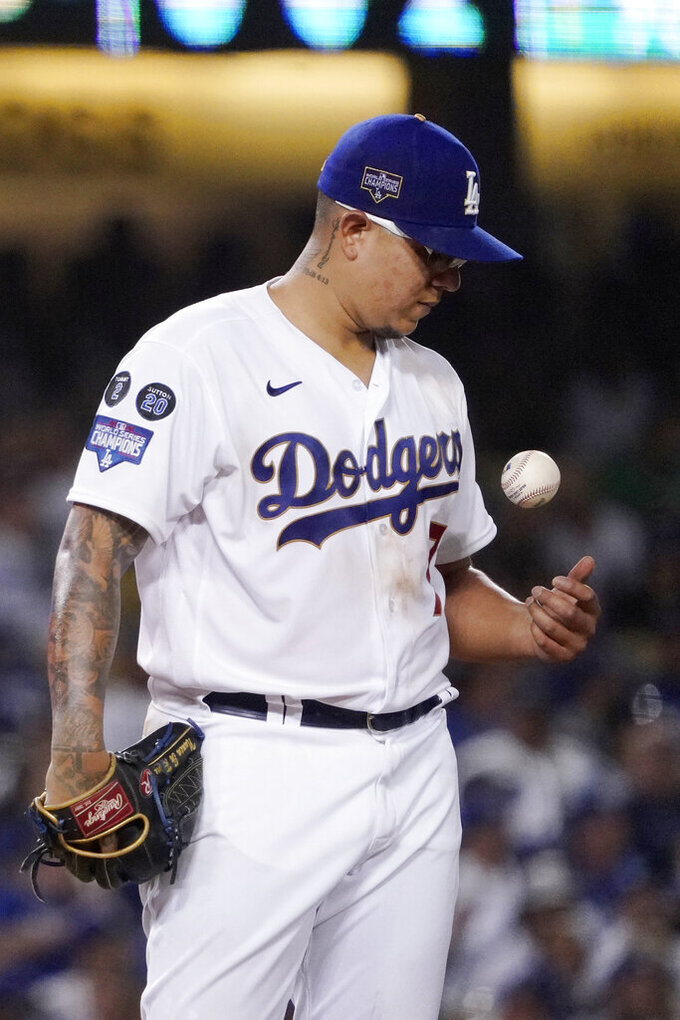 Los Angeles Dodgers starting pitcher Julio Urias tosses the ball in the air before being taken out of the game during the sixth inning of a baseball game against the Philadelphia Phillies Tuesday, June 15, 2021, in Los Angeles. (AP Photo/Mark J. Terrill)

LOS ANGELES (AP) — Thousands of Dodgers fans got their first opportunity to see Mookie Betts play at home in person Tuesday night as stadiums in California were allowed to go to full capacity as part of eased COVID-19 restrictions.

The star outfielder didn't disappoint them.

Betts hit a go-ahead home run in the seventh inning to lead Los Angeles to a 5-3 victory in front of a sellout crowd of 52,078 at Dodger Stadium. It was the largest attendance for a baseball game in the United States since the start of the coronavirus pandemic.

The Dodgers acquired Betts from the Boston Red Sox in February 2020, so this was the first time he got to play for Los Angeles before a big crowd at Chavez Ravine.

“At the beginning I soaked it in while I could. After that I tuned it out and took care of business. I'm used to playing in front of big crowds,” Betts said.

Betts led off the seventh by driving an 0-2 changeup from Ranger Suárez (2-1) over the left-center wall to give Los Angeles a 4-3 lead. Betts, who had three hits, also provided an insurance run with an RBI single in the eighth.

“For him to go deep and have a big night was great for the fans,” Dodgers manager Dave Roberts said. “You could just feel the buzz and the anticipation. There were different moments where the crowd was on their feet.”

Betts had a .253 batting average going into June, the lowest of his career through two months, but has started to turn it around with three of his eight home runs coming in the last six games.

The Phillies have lost two straight, and slugger Bryce Harper left with lower back stiffness after he took an awkward swing in the fourth.

Second baseman Jean Segura, fifth in the majors with a .332 batting average, also exited with an apparent left groin injury after beating out a grounder with two outs in the ninth.

Philadelphia manager Joe Girardi said Harper is day to day but he's concerned Segura will be out longer.

Joe Kelly (2-0), the third of five Dodgers pitchers, worked a scoreless seventh to get the win and Blake Treinen pitched the ninth for his third save.

The Dodgers got on the board in the first when Gavin Lux reached with a one-out single, advanced to third on Justin Turner's single and scored on Will Smith's grounder.

Philadelphia quickly evened it in the second when Andrew McCutchen drove Julio Urías' fastball into the seats in left-center.

The Dodgers took a 3-1 lead in the fourth on RBI doubles by Zach McKinstry and Urías. The Dodgers lead the NL in RBIs by their pitchers with 15, including eight by Urías in his last five starts.

Philadelphia evened it in the fifth by taking advantage of a pair of Dodgers errors. After Alec Bohm led off with a single, Luke Williams reached first on a throwing error by second baseman Chris Taylor. After pitcher Zach Eflin's sacrifice bunt moved the runners to second and third, Odúbel Herrera's base hit drove in Bohm. Williams scored to tie it at 3 when left fielder Matt Beaty misplayed the ball.

The Phillies had their chance in the eighth after Phil Bickford walked the first two batters. But he rebounded with strikeouts of McCutchen and Bohm before Williams grounded out to end the threat.

Philadelphia left nine on base and was 1 for 9 with runners in scoring position.

“Hitting it with runners in scoring position usually is the difference in the games,” Girardi said.

Urías was trying to become the first 10-game winner in the majors but was plagued by bad fielding. The left-hander allowed six hits and three runs (two earned) in 5 2/3 innings with five strikeouts and two walks. It was only the third no-decision for Urías in 15 starts.

Eflin failed to make it to the sixth inning for only the second time in 13 starts. He went five, allowing three runs and seven hits with two strikeouts.

Phillies: SS Didi Gregorius' rehab stint at Triple-A Lehigh Valley is on pause after it was determined he has pseudogout in his right elbow. General manager Sam Fuld said on the Phillies Radio Network pregame show that the team hopes Gregorius can resume playing before the end of the week.

Dodgers: 1B Yoshi Tsutsugo (calf) has reported to Triple-A Oklahoma City, but Roberts said Tsutsugo has not played yet because his luggage hasn't arrived.

The Dodgers conclude a six-game homestand with LHP Clayton Kershaw (8-5, 3.39 ERA) taking the hill. The Phillies are the only NL team that has a winning record against Kershaw at 5-4. Philadelphia RHP Zack Wheeler (4-3, 2.29) is ninth in the NL in ERA but is 0-1 in his last three starts.