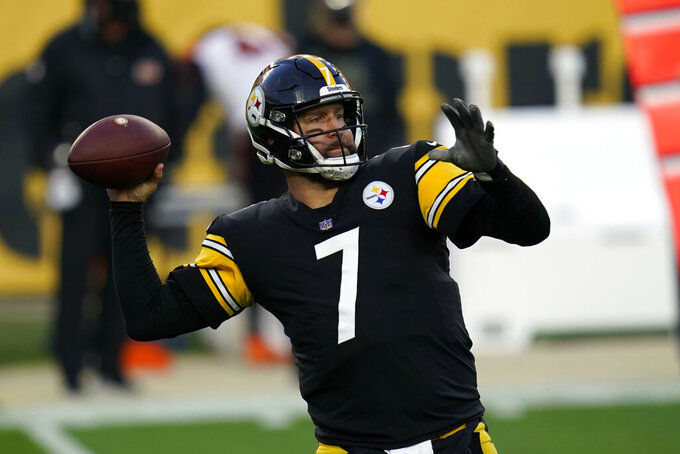 Pittsburgh Steelers quarterback Ben Roethlisberger (7) throws a pass during the first half of an NFL football game against the Cincinnati Bengals, Sunday, Nov. 15, 2020, in Pittsburgh. (AP Photo/Keith Srakocic)

There is one accolade Roethlisberger hasn't achieved in 17 years, 153 wins (and counting) and 385 touchdown passes (and counting): a single vote for the NFL's Most Valuable Player award. It might be time he received one. Maybe more than one.

While Roethlisberger is quick to point to Pittsburgh's unblemished record (9-0) as all the validation he needs for a job well done, the way the 38-year-old is thriving a year removed from a right elbow injury that cost him all but six quarters of the 2019 season is the biggest reason the Steelers are the NFL's last unbeaten team.

A year ago, they somehow managed to pull out an 8-8 season despite shuffling between backups Mason Rudolph and Devlin “Duck” Hodges.

Now they've paired one of the league's most disruptive defenses with an offense that makes up for it in production what it lacks in hype.

Roethlisberger is on pace to set a career high in touchdown passes and a career low in interceptions (in seasons where he's played at least 15 games). And he seems to be getting stronger as the weeks pass.

On Sunday, he shook off five days of self-quarantine due to the NFL's COVID-19 protocols to throw for a season-high 344 yards and four touchdowns in a 36-10 win over Cincinnati.

Playing in the middle of ever-swirling winds at blustery Heinz Field, he completed 27 of 46 passes against a Bengals defense that — perhaps bizarrely — stacked the line of scrimmage to stop Pittsburgh's lethargic running game, daring Roethlisberger to beat them with his arm.

Oh, and for good measure he hit Diontae Johnson with a 46-yard rainbow down the left sideline late in the first quarter to get going, silencing any concerns about his inability to get the ball downfield with his rebuilt right arm.

“That was the spark that got us going deep down the field like that,” said Johnson, who finished with six receptions for 116 yards and a touchdown.

Roethlisberger admitted he might have had a little extra zip on the ball thanks to a low-key week in which he worked from home when contact tracing conducted after teammate and good friend Vance McDonald tested positive for COVID-19 required Roethlisberger to stay away from the team facility for five days.

He took advantage of the downtime, throwing about 50 passes on Friday, but otherwise giving his body a much-needed break.

Considering the way he played, the Steelers might want to consider a “less is more” approach going forward.

Either way, Roethlisberger's performance is validating the team's decision to spend the offseason stocking up on talent to win now rather than begin concentrating on the post-Roethlisberger era.

That time will come eventually. It seems far away at the moment. Pittsburgh is rolling and the franchise's all-time leader in just about every significant passing category has rarely looked better, whether he wants to admit it or not.

“It’s not always pretty,” Roethlisberger said. “I don’t always give them good passes, but we move guys around enough, and they understand concepts and understand routes and understand what I’m asking and what (offensive coordinator) Randy (Fichtner) is asking, and they make plays.”

The Steelers have scored at least 24 points in each game this season, the longest streak of hitting that plateau in franchise history. After being relatively balanced early in the year, they've done it almost exclusively through the air, particularly when Roethlisberger goes to an empty set that features four wide receivers and tight end Eric Ebron.

One of the reasons the Steelers have gone five-wide so often? The running game that was methodical if not dominant during the first five games has vanished. Pittsburgh is averaging just 58 yards rushing over the past month, including a season-low 44 yards against a Cincinnati defense that was ranked 29th in the league against the run.

The decision to bring back punter Jordan Berry — who was cut on the eve of the regular season in favor of Dustin Colquitt — is paying off nicely. Berry averaged 49.3 yards per kick against Cincinnati, pinning the Bengals inside their 20 four times in the process.

The return of veteran defensive tackle Tyson Alualu was supposed to help Pittsburgh's leaky run defense get it together. It didn't quite work out that way. The Bengals ran for 139 yards despite missing starting running back Joe Mixon. Take out a 39-yard gain on a fake punt and Cincinnati still ran for 100 yards on 20 carries.

The Steelers are hopeful defensive back Mike Hilton's aching shoulder will be good enough to return next week against Jacksonville. Hilton, one of the best tacklers on the team, hasn't played since a win over Philadelphia on Oct. 11.

22. The number of teams since the 1970 merger who have started the season 9-0. Of the previous 21, seven have won the Super Bowl, the 2009 New Orleans Saints being the most recent.

The Steelers will try to avoid a letdown before a rematch against Baltimore on Thanksgiving night when they visit lowly Jacksonville (1-8) next Sunday. The Jaguars have typically played Pittsburgh tough at home. The Steelers have won in each of their past three trips to Jacksonville, but the games have been decided by a total of 17 points.