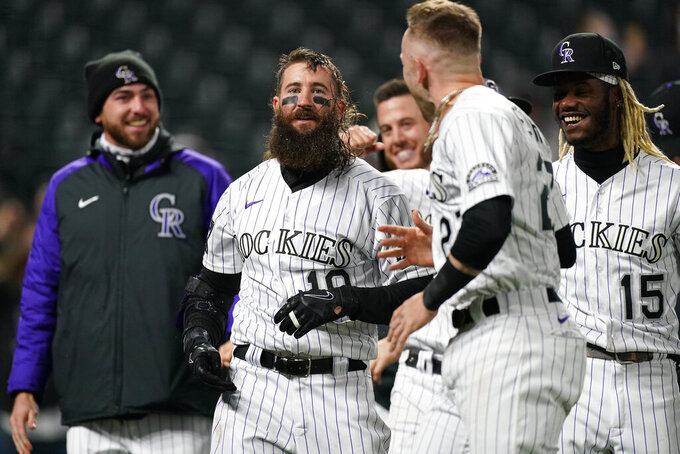 Teammates welcome Colorado Rockies' Charlie Blackmon, center, at home plate after he hit a three-run, walkoff home run off San Francisco Giants relief pitcher Camilo Doval in the seventh inning of game two of a baseball doubleheader Tuesday, May 4, 2021, in Denver. The Rockies won the nightcap by score of 8-6.(AP Photo/David Zalubowski) 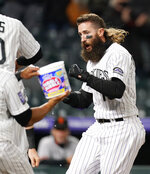 DENVER (AP) — Charlie Blackmon hit a three-run, two-out homer off Camilo Doval to cap a comeback from a four-run deficit in the final inning, giving the Colorado Rockies an 8-6 win over the San Francisco Giants on Tuesday night for a doubleheader split.

“We had five guys in a row reach. That was pretty awesome hitting and I just felt things were going our way,” Blackmon said. Brandon Belt hit a go-ahead single and a grand slam in a 10-run first inning that propelled the Giants to a 12-4 victory in the opener, then homered again as the Giants built a 6-2, sixth-inning lead in the second game. Belt had seven RBIs in the doubleheader, shortened to seven-inning games under pandemic rules.

“It feels pretty good,” said Belt who joined Willie Mays as the only San Francisco Giants player to homer in the first inning of successive games on the same day. “Obviously, it would have been better if we pulled off two wins today but we can make it all right by winning tomorrow.” Pinch-hitter Alan Trejo singled off Jake McGee with one out in the seventh, Garrett Hampson singled with two outs, and Trevor Story's two-run double cut the deficit to 6-4.

Ryan McMahon hit an RBI single, Doval (0-1) relieved and C.J. Cron fouled off a 2-2 pitch, worked the count full and blooped a single to right. Blackmon hit his second homer of the season, driving a full-count slider into the right-field seats for his fourth game-ending home run.

“It looked like we were in dire straits but we strung at bats together,” Rockies manager Bud Black said. “I told the guys that’s the secret, to really bear down and play all 27 outs on both sides and we did that tonight.” Ben Bowden (1-2) got his first big league win with 1 2/3 scoreless innings in the second game. Wilmer Flores and Cron had two-run homers.

Márquez (1-3) allowed eight runs and six hits in two-third of an inning, an outing that raised his ERA from 4.13 to 6.21. He has lost to the Giants three times this season.

Colorado allowed double-digit runs in an inning for the seventh time.

Brandon Crawford added a two-run homer in the sixth against Lucas Gilbreath as the Giants romped in the makeup of Monday night’s rainout.

“It was nice to have that cushion but I don’t think at any point did we feel comfortable to take our foot off the gas,” Giants manager Gabe Kapler said. “I thought Craw’s homer was as important as any big hit that we had in the first inning.”

Tauchman, acquired from the New York Yankees last week, hit leadoff for the Giants for the first time and scored twice in the first, doubling starting the game and later walking.

San Francisco sent 13 men to the plate and had eight hits in the first, its biggest inning since scoring 10 runs in the fourth of an 11-6 win over Pittsburgh on Sept. 7, 2008. It was the fifth time the Giants scored double digits in the first inning, the first since an 11-run frame against St. Louis on June 29, 1967.

“You’ve got to give credit to the Giants,” Marquez said through an interpreter. “They’re a good-hitting team. I didn’t command the ball as well, and they took advantage of that.”

Giants: RHP Kevin Gausman was placed on the injured list after receiving a COVID-19 vaccination and experiencing symptoms. The team’s medical staff anticipated the after-effects will clear up in a day or two. ... C Joey Bart was recalled from the alternate training site. ... INF Tommy LaStella went on the 10-day IL, retroactive to Monday, because of a left hamstring strain. Manager Gabe Kapler estimated LaStella could be sidelined up to six weeks. ... INF Jason Vosler was recalled from the team’s alternate site.