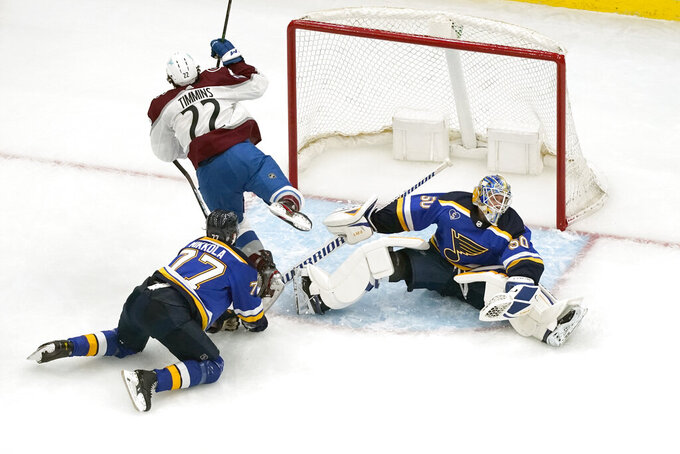 Vladimir Tarasenko couldn't summon a lot of words to explain another early playoff exit by the St. Louis Blues.

The ones he found weren't pretty.

“There is no excuses,” Tarasenko said after the Blues were swept in the first round by the Colorado Avalanche. “This is embarrassing.”

It's the second consecutive first-round loss for the Blues since winning the Stanley Cup for the first time in franchise history in 2019.

Injuries kept St. Louis from playing with a full roster for much of the season and the entire series, but that explanation won't prevent more changes from coming for a team that already looks different from the championship parade two years ago.

“We’re here trying to win again and they’re going to do whatever they can to put the best team out there,” first-year captain Ryan O'Reilly said. “It’s nice to have faith in the organization like that, but you don’t know what’s going to happen. It’s tough right now.”

It was tough for the Blues to lose longtime captain Alex Pietrangelo to Vegas in free agency last fall, even as they added former Boston defenseman Torey Krug to take his place. They traded backup goaltender Jake Allen to Montreal to save salary-cap space, but much of the Cup-winning core remained.

A season after losing to Vancouver in the first round of the bubble playoffs in six games, getting swept is more of an indication a shakeup is needed. St. Louis was outscored 20-7 by Presidents' Trophy-winning Colorado and could hardly keep up at times.

“They were better than us,” coach Craig Berube said. “They beat us four straight. They’re a great team. We weren’t good enough. That’s the bottom line.”

Now what? Well, the Blues will look much different when they return to the ice in October.

General manager Doug Armstrong could make some other moves, too, in an effort to bring in some fresh blood and change the makeup of the locker room.

There's no doubt injuries and leading scorer David Perron's absence while on the NHL's COVID-19 protocol list contributed to the series being so lopsided. Crucial depth players Oskar Sundqvist and Carl Gunnarsson have been out with knee injuries, defensemen Vince Dunn, Robert Bortuzzo and Justin Faulk all got injured, and the Blues weren't themselves.

After missing Tarasenko for almost the first two months of the season and losing Schwartz, Bozak, top defenseman Colton Parayko and forward Robert Thomas for big chunks of time, they got used to playing short-handed.

“We went through it all year,” Berube said. “We've got good enough players. You could use that as an excuse, but I'm not going to do that.”

After succeeding Pietrangelo as captain, O'Reilly put much of the blame on himself for not containing Colorado's top line of Gabriel Landeskog, Nathan MacKinnon and Mikko Rantanen. They combined for nine goals.

“I was pretty pathetic,” O'Reilly said. “I had the opportunity early to see a lot of that line and play them harder, and I didn’t do my job. And if I’m not doing my job, can’t expect anyone else to do theirs. It’s tough. I have to obviously improve, especially in the crucial times.”

O'Reilly won the Conn Smythe Trophy as playoff MVP in 2019 and the Selke Trophy that season as the league's best defensive forward. When he's not at his best, neither is St. Louis.

Jordan Binnington came out of nowhere to backstop the Blues to the Cup two years ago. He was four and out this time with a 3.59 goals-against average and .899 save percentage.

O'Reilly said he feels bad for Binnington, “who played outstanding,” and the 27-year-old goaltender wasn't responsible for the series defeat.

Binnington unfortunately made a bigger impact trying to pick a fight.

“Things happen in a series,” Colorado goalie Philipp Grubauer said. “It got a little pushy. If he wants to come down, one day somebody's going to answer the bell, so hopefully he doesn't do that that too many times. But it's his game. If he wants to do it, so be it.”