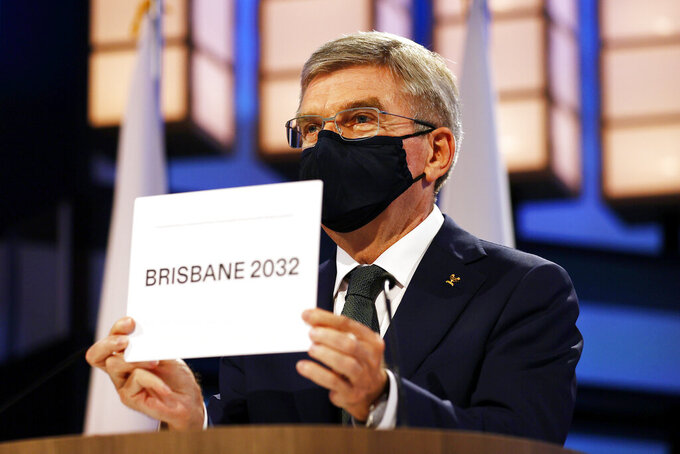 FILE - President of the International Olympic Committee Thomas Bach announces Brisbane as the 2032 Summer Olympics host city during the 138th IOC Session at Hotel Okura in Tokyo, July 21, 2021. The Brisbane Games are scheduled to be held from July 23 to Aug. 8, 2032, in Brisbane and in coastal communities south on the Gold Coast and north on the Sunshine Coast. (Toru Hanai/Pool Photo via AP, File)

BRISBANE, Australia (AP) — Brisbane 2032 Olympic officials staged an event Saturday that not many other previous host cities have had the opportunity to celebrate: 10 years out until their Games begin.

The east coast Australian city and capital of Queensland state was awarded the 2032 Games a year ago after the International Olympic Committee rubber-stamped an earlier recommendation from its Executive Board.

Brisbane was the first city to be awarded a Games under the IOC's revamped procedure for choosing host cities which saw a small group of IOC members identify and propose host cities to the board. Previously Games had been awarded to both Summer and Winter Games hosts seven years out from them being held -- although at an IOC session in 2017, the IOC chose both Paris (2024) and Los Angeles (2028) as future host cities.

The Brisbane Games are scheduled to be held from July 23 to Aug. 8, 2032 in Brisbane and in coastal communities south on the Gold Coast and north on the Sunshine Coast.

On Saturday, the Australian Olympic Committee held a family fun day with the public along the riverfront in downtown Brisbane with a slogan “Our Time Starts Now.”

“That’s how we look at the incredible opportunities over the next decade,” AOC chief executive Matt Carroll said in a statement. “We have talked about more than 30 major international sporting events coming to Australia and community infrastructure coming on-line in the decade ahead."

The Brisbane organizing committee is still composed of only a skeleton staff but officials hope to name a fulltime chief executive officer by the end of this year. Current plans are for six new venues and eight redeveloped facilities among 22 competition sites.

Australia last staged the Summer Olympics in 2000 at Sydney and hosted the Games for the first and only other time in Melbourne in 1956.