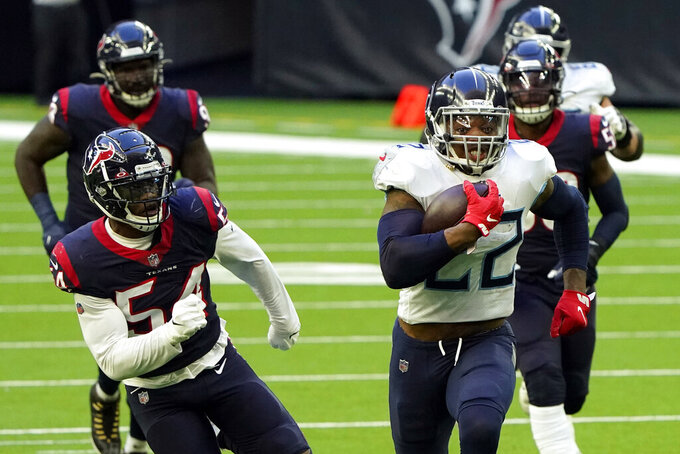 FILE - In this Sunday, Jan. 3, 2021, file photo, Tennessee Titans running back Derrick Henry (22) runs for a touchdown as Houston Texans' Jacob Martin (54) chases during the first half of an NFL football game in Houston. The Titans play the Baltimore Ravens in a wild-card playoff game on Sunday. (AP Photo/Eric Christian Smith, File)

Washington's NFC East triumph is nothing to scoff at despite the losing record. A franchise in turmoil because of off-field issues that released the supposed building block at quarterback late in the season has been somewhat revitalized by the work of coach Ron Rivera. The defense is aggressive and anchored by rookie Chase Young, the second overall pick in the 2020 draft. The starting QB, Alex Smith, has been as inspirational as any NFL player, capping a comeback from a severe injury that almost cost him a leg.

“You talk about a proven winner, he’s the epitome of that,” Eagles coach Doug Pederson says of Smith. “What he’s overcome in his career on and off the football field and what he’s come through and to see him out there playing now, I’ve been so happy for him.”

Still, it's pretty much a mismatch.

Brady has shown yet again how overwhelmingly responsible he was for all those championships in New England. His Buccaneers had not sailed into the postseason since 2007. He has been in his usual January form for a month — rare form, indeed, for a 43-year-old quarterback.

And there's more. Brady has more weapons in support on offense than since that same 2007 season with the Patriots. Tampa Bay's defense is solid enough and could give Smith more fits than Washington's impressive rush gives Brady.

Tampa Bay, No. 8 in the AP Pro32's final season rankings, is an 8-point favorite over No. 16 Washington. And for those still involved in knockout pools, we'd advise taking the Bucs.

There are some who believe Buffalo is the best threat to top-seeded Kansas City in the AFC, which is stronger overall than the NFC. We're not quite sure of that, but if Josh Allen truly has matured into an MVP-level player, he'll do more than Philip Rivers will here in what might be the Colts QB's last game.

When teams play for a third time, there are not many secrets they can bring to the field. That means Seattle, with its resurgent defense, awakened running game and just enough Russell Wilson, should have enough for the Rams. LA has no clue how (or how long) QB Jared Goff can go, and the Rams won't win this game on the ground. It will need a huge game from its formidable defense.

Now here are two teams capable of running over, through and around each other.

Baltimore does so with its running backs, led by rookie J.K. Dobbins, and quarterback Lamar Jackson, who has been sensational lately. But he's also bombed in both of his postseason starts, so he must display the kind of growth Buffalo's Allen has shown.

Derrick Henry has been historically good, rushing for more than 2,000 yards and setting the tempo nearly every week. He could do it again.

Like Rivers, this could be Drew Brees' final game of a superb career. Having Alvin Kamara back from the COVID-19 list would be the tonic he needs to keep playing this month.

NBC and the NFL love the idea of having this bitter rivalry conclude wild-card weekend in prime time. The problem: Cleveland, in the postseason for the first time since 2002, still is in the midst of a coronavirus outbreak and won't have coach Kevin Stefanski or standout guard Joel Bitonio.

The Steelers pushed the Browns hard in the season finale despite sitting so many of their regulars. Yet, we can't erase Pittsburgh's December doldrums from our memory.

We don't see either of these teams advancing beyond this round.