Bucs fans set to cheer inside, outside Super Bowl stadium 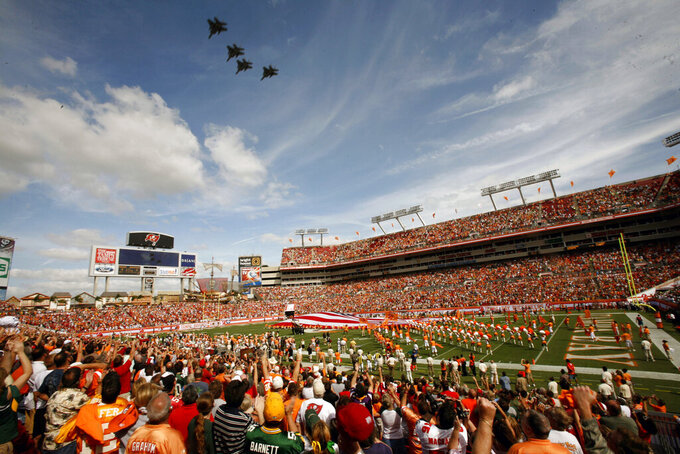 FILE - Tampa Bay Buccaneers fans cheer during a military fly over before an NFL football game against the Green Bay Packers in Tampa, in this Sunday, Nov. 8, 2009, file photo. Hall of Famer Warren Sapp wishes the Tampa Bay Buccaneers could pack the stands for the first Super Bowl played in a host team’s home stadium. (AP Photo/Brian Blanco, File)

Because of coronavirus pandemic concerns, the NFL’s decision to limit capacity to 22,000 at Raymond James Stadium, and soaring prices for a limited number of tickets available for the league’s title game will prevent that.

All’s not lost, though, for an excited though sometimes fickle fan base embracing a bittersweet opportunity to enjoy the NFC champions on football’s biggest stage after being forced to follow the Tom Brady-led Bucs, as well as playoff runs by the region’s other two major pro franchises, from afar.

The NHL’s Tampa Bay Lightning won the Stanley Cup while playing the entire postseason in Canada, then was unable to fully celebrate with hometown fans, who were left to salute the team during a boat parade and outdoor stadium rally that replaced a more traditional-style celebration on the streets of downtown Tampa.

The Bucs won three straight playoff games on the road to become the first team to advance to a Super Bowl in its home stadium.

Tampa Bay has a reputation nationally for supporting the Lightning, but not the Bucs and Rays, who routinely rank near or at the bottom of baseball in attendance.

The past year truly has been special for all the franchises, though, and fans are celebrating any way they can.

“The Bucs in the Super Bowl with the game at home doesn’t even seem real. Usually there’s a buildup. A team goes to the playoffs, loses and goes back and loses again. It takes time to get good,” long-time fan Justin Heaven said.

“The Bucs go 7-9 with Jameis Winston, haven’t won a playoff game in 18 years and haven’t been to the playoffs in 13,” Heaven added. "Tom Brady comes to town and it’s basically: `You want to go to the Super Bowl? Come on, let’s go.’”

Fans happily are following, even if they won’t be able to get in or mingle around the stadium with a game-day crowd that’ll include 7,500 vaccinated health care workers given tickets as a thank you for their service during the pandemic.

Restaurants and bars figure to be busier than they’ve been in months, though much of the glitz and glamour usually associated with the Super Bowl will be muted with some events canceled and city officials urging local residents and visitors to practice social distancing.

“We’ve got the biggest game in our house, we’re in it and can’t fill it? I know that’s disappointing for a lot of fans. But people have got to be smart and stay safe,” said Sapp, one of the stars of Tampa Bay’s Super Bowl championship run 18 years ago.

Derrick Brooks, another Hall of Famer and defensive star with the 2002 Bucs, is co-chairman of the Tampa Bay Super Bowl Host Committee, which has worked closely with the NFL and local sponsors to prepare the community to host the title game for a fifth time.

“Obviously, it has got everybody excited. Warren and I were on the phone practically every other play last week watching them beat Green Bay. That was a whole lot of fun,” Brooks said.

“With the Lightning winning the Cup and Rays coming within a couple of games of winning the World Series, it’s kind of fitting with the Bucs making the first part of history,” Brooks.

“I say that because the story’s still being written. They’re still making history and can finish it by being the first to win it in their home stadium.”

Lightning captain Steven Stamkos and several teammates took in a Bucs game in early October and even brought along the Stanley Cup.

Super Bowl Sunday will be a travel day for the hockey champions, so they won’t be in town during the game.

“It’s been amazing to watch and obviously be a part of. This city is very deserving of that. We have very loyal fan bases and it’s a great sports town,” Stamkos said of the success of the Lightning, Rays, and now the Bucs.

“At the end of the day we’re all sports fans. I grew up playing all those sports as a kid. You kind of dream that you could be a professional athlete in a different sport too,” Stamkos added. “I watch those guys, I admire them. It’s inspiring for us as athletes to watch what they have to go through to achieve their dreams.”

Tampa mayor Jane Castor and counterparts from St. Petersburg and nearby Clearwater, meanwhile, stress the importance of everyone balancing having a good time and staying safe during a pandemic.

“The only people we want leaving disappointed," the mayor said, "is the Kansas City Chiefs.”