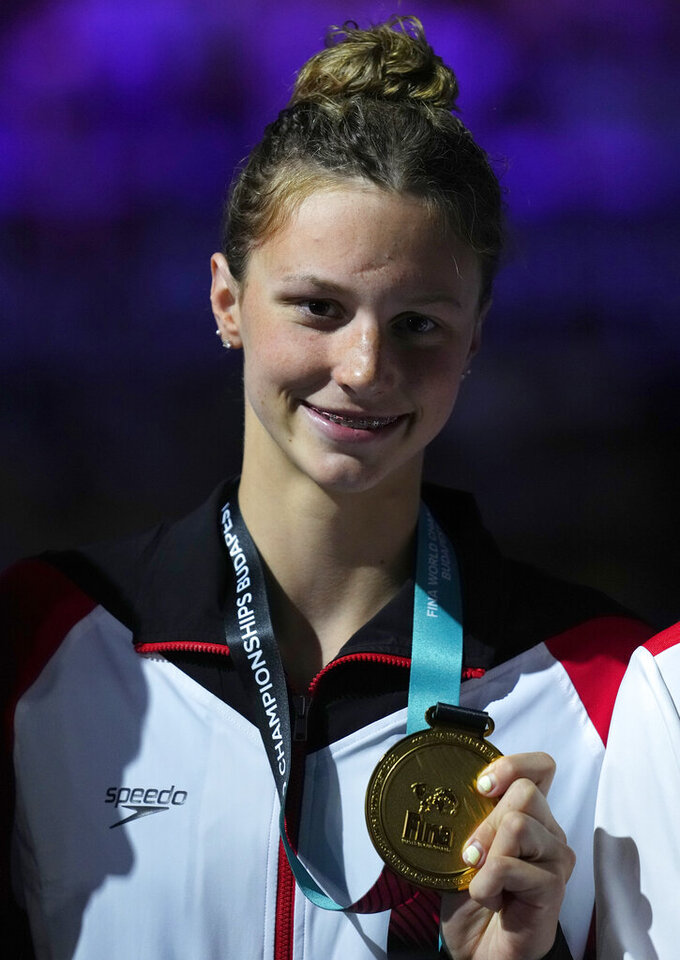 BUDAPEST, Hungary (AP) — Canadian swimmers are enjoying their most successful world swimming championships ever in Budapest this week.

Golds for the remarkable Summer McIntosh and Kylie Masse are the prize jewels in a nine-medal haul for Canada so far. Only the Americans and Australians have claimed more ahead of the final day of racing at Duna Arena on Saturday.

“It feels good,” Josh Liendo said of Canadian swimmers eclipsing eight medals at the 2019 worlds, and already a marked improvement on four at the previous worlds in Budapest in 2017.

Liendo was responsible for Canada’s eighth medal this week with bronze in the men’s 100 meters butterfly on Friday. Then he helped gain the team's ninth with silver in the mixed 4x100 freestyle relay.

“We’re building some momentum here and looking forward to next year and then 2024,” Liendo said, referring to the Paris Olympics. “We’re going to have a really good team. So it’s exciting.”

The 19-year-old Liendo also clocked a Canadian record 21.61 in the men's 50 freestyle on Friday.

Canadian success in the pool is not a lucky accident.

The team’s high-performance director, John Atkinson, told The Associated Press this week that it was down to targeting specific events, finding new ways to identify talent, and being patient.

“That’s kind of the key – let it grow and be patient with it,” Atkinson said after McIntosh and Masse won golds on Wednesday. “It’s about performing now with those that can, and it’s about a production line of those for the future.”

Appearing at her first major event, the 15-year-old McIntosh won the women’s 200 butterfly, clocking 2:05.20 for a national record, world junior record and the fastest time this year.

“This is the start of people getting to know who she is. And she’s got some more races this week,” said Atkinson, who praised her coach, Ryan Mallette, for helping her become Canada’s youngest world champion.

“We first identified Summer when she was 12 years old, swimming in our world trials in 2019,” Atkinson said. “Worked with her coach at the time from her club program, Etobicoke, then she transitioned into a high-performance center two years ago. So a very driven, organized young woman who swims a wide range of events.”

While McIntosh is the new star, Masse has been a force for Canada since winning the women’s 100 backstroke at the World University Games in 2015.

Masse won the 50 backstroke final to become a world champion for the third time after the 100 in 2017 and 2019. Only Katie Ledecky and Caeleb Dressel have also won gold at the last three world championships.

“She's stood on the podium at every major championships since 2015,” Atkinson said of Masse.

McIntosh and Masse also claimed silvers in the 400 free and 100 backstroke, respectively.

Their achievements are inspiring others.

“Summer’s a beast,” Liendo said of McIntosh’s 200 butterfly win after he won his own first medal in the 100 freestyle. “I was watching it before I came to the ready room and I was like, Jeez, this kid’s insane, she definitely got the blood flowing. She got me pumped up.”

Liendo’s bronze was Canada’s first medal in the men’s 100 freestyle since Brent Hayden’s silver in 2011.

Taylor Ruck, Margaret MacNeil and Penny Oleksiak – all 22 – and the 21-year-old Kayla Sanchez won silver for Canada in the women’s 4x200 freestyle relay.

Oleksiak was 16 when she won gold in the 100 free at the 2016 Olympics. She has since gone on to become Canada’s most successful Olympian with seven medals. She has two silver and a bronze from relays so far this week in Budapest, and is tied with Ryan Cochrane as the most decorated Canadian swimmer at a worlds with eight medals, all from relays.

“Being on this team is such a privilege,” Oleksiak said. "It’s awesome to be a part of it and accomplish things like that.’’

Atkinson, who joined Swimming Canada in 2013 after 12 years in different roles with British Swimming, says the 2010 Winter Olympics in Vancouver was a catalyst for how the Canadian government viewed sports. The organization Own the Podium was set up to help Canadian athletes prepare for those games and has since continued its support.

“They are our major funding agency to work with us, to partner with us,” Atkinson said. “We work with them on putting a pathway into place to put in systems and structures that support where our athletes are at, and our coaches.”

Atkinson also referred to facilities built for the 2015 Pan American Games, including the Toronto Pan Am sports park, where one of Swimming Canada’s high-performance centers is based, with another in British Columbia.

“Facilities are good – of course, we’d always like more – but what we’ve got, we get good access to, and we’re thankful,” Atkinson said.