Canadiens coach Ducharme to return for Game 3 of Cup Final 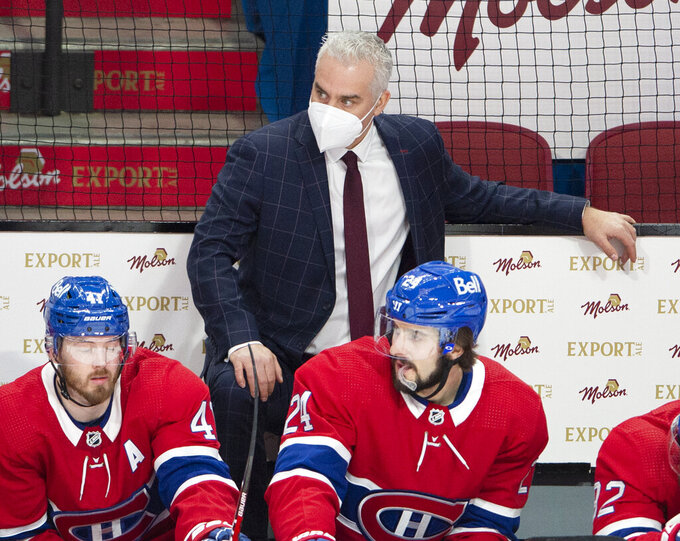 MONTREAL (AP) — Montreal Canadiens interim coach Dominique Ducharme will have to wait until Game 3 of Stanley Cup Final against the defending champion Tampa Bay Lightning to rejoin his team after testing positive for COVID-19.

Remaining symptom-free, Ducharme updated his timetable during a video conference call on Saturday after previously hoping he’d be allowed to complete his two-week mandatory self-quarantine earlier.

The Canadiens open the final series with Games 1 and 2 at Tampa Bay on Monday and Wednesday. Ducharme will return in time for Game 3 on Friday, when the series shifts to Montreal.

“I just can’t wait to come back,” Ducharme said. “I’m not trying to look at the calendar too often. It’s like looking at your watch too often, and it looks like time doesn’t go by. I’m trying to be as busy as I can.”

Assistant coach Luke Richardson has taken over since Ducharme tested positive on June 18, hours before Montreal hosted Vegas for Game 3 of their semifinal series. Ducharme watched the past four games with his girlfriend from home on TV as the Canadiens eliminated the Golden Knights with a 3-2 overtime win in Game 6 on Thursday.

Though not with the team, Ducharme remains in daily contact with his staff and players via Zoom, and also consults with Richardson between periods of games.

“I’m pretty calm sitting down and watching the way we play and what’s going on and thinking about little things that maybe we can do better or what we were doing good to keep going,” Ducharme said. “After the period, the coaches give me a call, and we just talk for a minute or two just like we do every time we go back to the office.”

Ducharme was promoted from his assistant position after Claude Julien was fired on Feb. 24.

The Canadiens entered the playoffs with the worst record of the 16 qualifiers, and have won 11 of 13 since being down 3-1 in their first round-series to Toronto. Montreal swept the Winnipeg Jets in four games in the second round.

Montreal now returns to the final for the first time since winning its 24th Stanley Cup in 1993.

Ducharme missed out on the chance to celebrate in person on Thursday, when Artturi Lehkonen scored the series-clinching goal 1:39 into overtime against Vegas.

“I was so happy. I would’ve liked to have been there to celebrate with everyone, but we have more ahead of us in the next round,” Ducharme said. “So we want to have our biggest celebration at the end.”