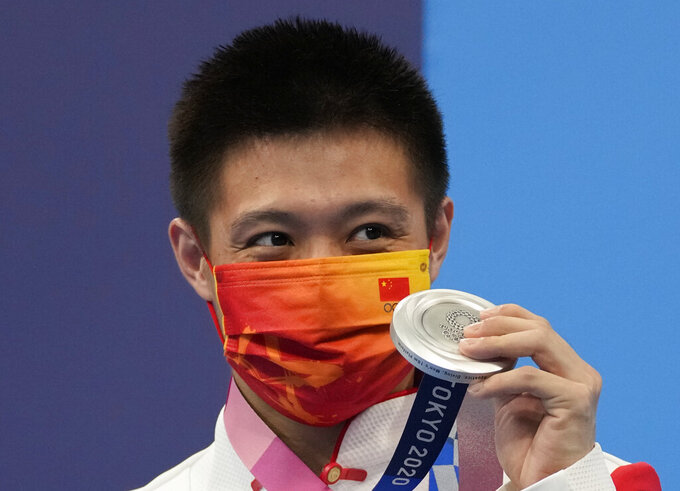 Yang Jian of China poses for a photo after winning silver medal poses for a photo in men's diving 10m platform final at the Tokyo Aquatics Centre at the 2020 Summer Olympics, Saturday, Aug. 7, 2021, in Tokyo, Japan. (AP Photo/Dmitri Lovetsky)

TOKYO (AP) — China finished off the single greatest diving performance in Olympic history on Saturday, when Cao Yuan outdueled his teammate to win the men’s 10-meter platform title, giving the Chinese gold medals in seven of eight events at the Tokyo Games.

China’s 12 diving medals tied the record for most won in the sport at a single Olympics. The U.S. also won 12 at the 1932 Los Angeles Games, when the Americans swept all four events and nine of the 28 divers were from the host country.

The only event the Chinese didn’t win in Tokyo was men’s platform synchro, where they finished second. China swept the four women’s events. In further confirmation of the country’s dominance, China finished 1-2 in all four of the individual events.

“The Chinese are very, very good," bronze medalist Tom Daley of Britain said. "You just know they’re going to win gold and silver. In female diving, they are so far ahead of the rest of the world, but in men’s, we’re slowly catching up.”

China’s 47 total golds in diving is only one short of the United States’ record of 48.

“It’s a really healthy competition within Team China,” Yang said through a translator. “Every time you practice, you want to do better. If one person trains more, the next person tries to step up. We push each other.”

Daley briefly broke up the Chinese juggernaut before finishing third with 548.25 points. He now has four medals in his career — one gold and three bronze — in four Olympics.

Cao and Yang battled through their final three dives.

Diving just ahead of Cao, Yang scored 112.75 points for the toughest dive of the final, a forward 4 1/2 somersaults pike that carries a 4.1 degree of difficulty. He earned marks ranging from 9.0 to 9.5 for his last dive.

“I tried not to think too much about it, just stay calm,” Cao said through a translator. “I try not to let what the other divers do get into my head.”

Yang popped his head to the surface and pumped his fists.

Cao answered with a back 2 1/2 somersaults with 2 1/2 twists pike — not as difficult as Yang's last dive, but it was worth two 10s. Cao received 9.5s for his other marks, giving him just enough to edge his teammate by 1.95 points.

“Of course, there’s pressure,” Cao said, “but in the final round I try not to focus on what the other divers are doing. I just stay focused on myself, stay calm and do my best every dive to make sure I don’t make any mistakes.”

Cao showed he meant business from the start. He earned five 10s on his first dive, giving him a 3.4-point lead over Daley.

Daley led after his second and third dives. He received three perfect marks of 10 on his first dive and one 10 on his second. But he fell to third on his fourth dive and stayed there the rest of the way.

“Once they get ahead, it’s hard for me to catch up,” Daley said.

Daley did beat the Chinese in 10-meter synchro with partner Matty Lee. They defeated Cao and Chen Aisen by 1.23 points.

At 27, Daley isn't ruling out competing three years from now in Paris.

“Hopefully, we’ll have mixed gender at the next Games,” he said. “That would be worth coming back for.”

Cao added to the golds he won on the 3-meter springboard at the 2016 Rio de Janeiro Games and in 10-meter synchro at the 2012 London Olympics. He also became only the second man to win medals in all four Olympic diving events after Dmitry Sautin of Russia.

Jordan Windle of the United States finished ninth among 12 divers. His teammate, Brandon Loschiavo, was 11th.