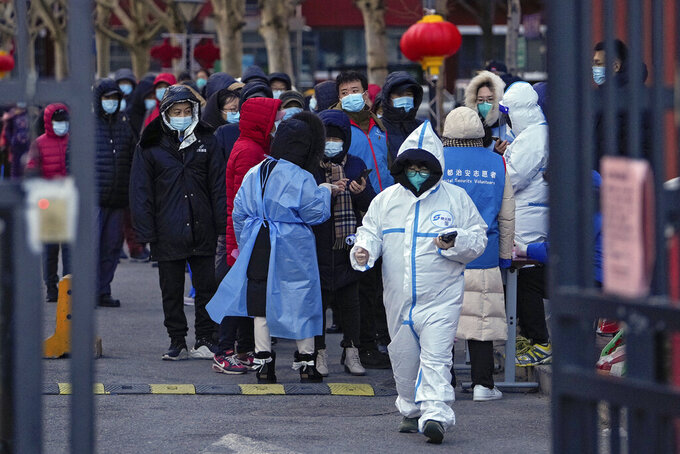 Residents wearing face masks to help protect from the coronavirus gather in line as they wait for a throat swab at a COVID-19 test site outside a residential housing block in Fengtai District in Beijing, Wednesday, Jan. 26, 2022. The Chinese capital reported an uptick more than dozen daily new COVID-19 cases as it began a third round of mass testing of millions of people Wednesday in the run-up to the Winter Olympics. (AP Photo/Andy Wong)

BEIJING (AP) — Repeated COVID-19 testing of millions of Beijing residents is starting to test the patience of some as the city clamps down on the virus ahead of the coming Winter Olympics.

A third round of mass testing that started Wednesday for the the 2 million residents of Fengtai district drew complaints online and from residents bundled up against the wind to wait in line outdoors. The skies were sunny, but the daytime high hovered around the freezing point.

“I think it is too frequent," said a woman who only gave her surname, Ma. "I just did it yesterday and was asked to do it again today. I asked the question to the staff and they said, ‘Under the principle of testing everyone who should be tested, just do it since you are here.’”

As health workers set up multiple testing stations around the city, there were scattered reports of people being told their testing would be delayed because of a system issue. It was unclear what the problem was and whether it would significantly set back the effort.

Athletes and others participating in the Games are being completely isolated from the general public to try to avoid cross-infection. Thirteen people who have come for the Games tested positive on Tuesday, bringing the total to 106 among the 3,695 who have arrived. Two of the positive cases are either athletes or team officials.

Those who test positive are taken to a hospital if they have symptoms and to a quarantine hotel if they do not.

Beijing officials said Wednesday that eight people had tested positive in the 24-hour period ending at 4 p.m., bringing the total in the city's delta variant outbreak to 69. Of those, 54 have symptoms and 15 do not.

The numbers are small compared to other countries — South Korea's latest daily tally topped 13,000 — but they are a major concern for the government as it prepares to host the Winter Games in nine days.

The Chinese capital has stepped up the country's already strict pandemic response measures. Mass testing of neighborhoods and buildings is being conducted around the city, and the local government announced this week that anyone who buys fever, headache or other cold medicines would have to take a COVID-19 test within 72 hours.

At one pharmacy, anyone purchasing such medicines was required to scan a QR code before making the purchase. A notice from the government said that purchasers were required to register their name, phone number, address and official ID number.

“This is not convenient, but we should cooperate with whatever policies the government comes up with,” Zhang Jianping, a salesperson at a shopping mall, said of the new cold medicine requirement. "We should protect ourselves from catching a cold so we don't become a burden on the country.”

All 2 million residents in Fengtai district, where half of the cases in Beijing have been found, are being tested for the third time since last weekend. Some areas of the district have been locked down, with residents not allowed to leave their housing complex or neighborhood.

“I have gotten used to it," said Tang Yupeng, a restaurant worker who was being tested in Dongcheng district. "I took my last test two days ago, and it caught us off guard, but this time we received notice beforehand so it’s ok.”

China's government has stuck to a zero-COVID approach, even as others have loosened restrictions on movement. Authorities snuff out any outbreak, no matter how small, with lockdowns, mass testing and travel restrictions. The policy has kept the number of cases and deaths relatively low in China but makes it challenging for the government to exit that strategy.