Clarke wins and he's off to the bar, this time not by choice 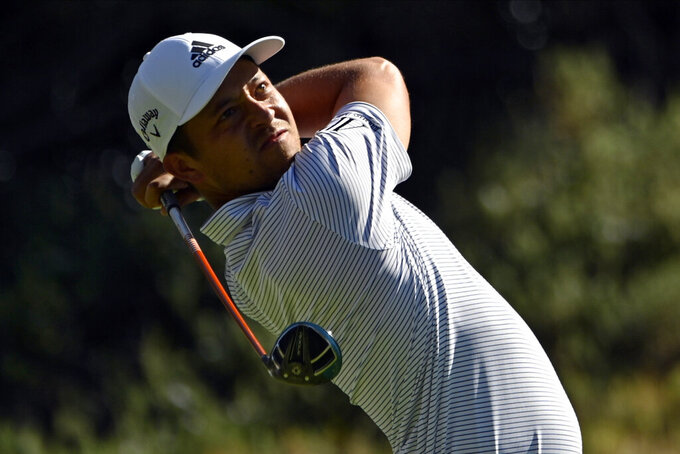 Stop if you’ve heard this one before: Darren Clarke wins a big tournament and spends the next week at the bar.

It’s not entirely by choice this time.

Clarke’s timing could not have been better for his first PGA Tour Champions victory, and his first win since the British Open at Royal St. George’s in 2011. His visa has expired, and the COVID-19 pandemic has complicated the renewal process. He said his Electronic System for Travel Authorization (ESTA), which was good for 90 days, expires on Wednesday.

“Consequently, I’ve got to leave the country,” Clarke said Sunday after his one-shot victory in the TimberTech Championship in Boca Raton, Florida.

He’s not headed home to Northern Ireland. No, the 52-year-old Clarke spends a fair bit of time in the Bahamas, particularly Abaco Club. And to be even more specific, Clarke said he could be found at a beach bar called Flippers.

“Drink some Sea Breezes, watch the boys on the big screen up there,” Clarke said. “When everybody makes a birdie, I’ll go cheer and have another Sea Breeze or a Kalik Light. It will be a little bit of both.”

Clarke is older and wiser — older, anyway — and says he won’t drink it up quite like he did nine years ago after winning his only major. He spoke highly of the 50-and-older circuit where it’s not as simple as showing up and playing golf. Players are working hard at it, and the fresh talent includes Ernie Els, Jim Furyk and occasionally Phil Mickelson.

In a perfect world, Clarke says he would like to be in Phoenix this week for the Charles Schwab Cup Championship.

“With all the COVID, all embassies are shut and as a non-U.S. citizen, you can only go to the embassy outside of the U.S. to get it renewed,” Clarke said. “But they’re all shut due to COVID. Nobody’s fault.”

It helps that the final official event of the year won’t decide the Schwab Cup champion. Because of tournaments lost to the pandemic, the 2020 and 2021 seasons are being combined.

Instead, Clarke is off to the Bahamas. And he’s happy.

Xander Schauffele and Mark Hubbard have never been paired together on the PGA Tour. If they ever do, they’ll have plenty to talk about, starting with cars.

Old cars, and not necessarily classics.

Schauffele, whose five worldwide victories include the Tour Championship and a World Golf Championship, is still driving the 2015 Toyota Camry he had on the Korn Ferry Tour. And he doesn’t sound like he’s about to upgrade.

“I bought it out a couple of years ago. Why would I get a new car?” he said.

That’s nothing compared with Hubbard, who is still driving his 2010 Honda CRV that used to belong to his mother.

“My man,” Schauffele said with a big smile when he heard this.

Hubbard says he’s never been big into cars and is rarely home enough, anyway. He and his wife, Meghan, moved from San Jose, California, to Houston.

“I don’t spend money on things, I spend it on experiences, like vacations,” Hubbard said. “I’m not a big toy guy.”

When they do drive, it’s usually his car. His wife drives a 2009 Nissan Sentra.

“We’re in the process of getting her a new car,” Hubbard said with a smile.

His idea of a dream car? Hubbard says when he was younger, he spent time with a great aunt who lived in the Hamptons.

“They had this no-top, white beach Jeep. You hop in, don’t even open the door,” he said. “Something like that would be fun. But I obviously don’t really want that in Houston.”

Bernhard Langer had two late bogeys that kept him from a chance at a 42nd career victory on the PGA Tour Champions. Even so, the resiliency of the 63-year-old German is no less remarkable. It was his 37th runner-up finish, meaning Langer has won or finished second in 29% of his PGA Tour Champions events.

If the 50-and-over circuit is the game’s greatest mulligan, Langer is cashing in. He played the majority of his PGA Tour career before prize money began to soar.

The European Tour fleshed out the back end of a pandemic year with a three-week South African swing ahead of the season-ending DP World Tour Championship in Dubai.

It wraps up a remarkable job by golf’s most global tour in the face of a pandemic.

The season was supposed to have 46 events. The tour lost 22 events but will end the season with 37 tournaments thanks to a dozen additions in the U.K. and Iberia and even Cyprus. There was a significant drop in prize money, with most of the new events offering a purse of no more than 1 million euros. But they were playing more than they could have.

Every piece of experience matters to Lanto Griffin, who defends his title this week in the Houston Open. He thought back to his rookie year in 2018, when he found himself four shots out of the lead going into the final round at Torrey Pines.

“I was nervous. I was playing well,” he said. “It was a whirlwind.”

The memory is not how well he kept his head in the game. Griffin closed with a 74 on a tough day and tied for 12th, five shots out of the playoff won by Jason Day. What makes him laugh is thinking of the reaction he had from home.

That week was the PGA Tour return for Tiger Woods after his fourth back surgery, the start of a comeback that culminated with a victory at the Tour Championship later that year. Woods teed off early on the back nine.

“I was fifth place with a few holes left and I ended up finishing 12th,” Griffin said. “I hit some really good shots and I didn’t get on TV, and it was because Tiger was in 30th finishing on the front nine, and my whole family was all upset. I basically told them, ‘Look, I’d much rather watch Tiger finish 25th than me fifth.’ So I totally get it. But that was my first taste of the PGA Tour.”

Even though the John Deere Classic was canceled this year because of the pandemic, the tournament helped raise $12.22 million for 465 local and regional charities. ... Two-time major champion Stacy Lewis was among 10 players added to the 156-player field for the U.S. Women's Open at Champions Golf Club in Houston on Dec. 10-13. They were taken off the LPGA Tour money list. ... Diamond Resorts has signed a three-year contract extension as the title sponsor of the LPGA Tour season opener in Orlando, Florida. The Diamond Resorts Tournament of Champions is Jan. 21-24. The extension takes the deal through 2024. ... Brian Gay (No. 328) was the third player in eight weeks of the new PGA Tour season to be outside the top 300 in the world when he won. The others were Stewart Cink (No. 319) and Hudson Swafford (No. 345).

In the seven tournaments Tiger Woods in which made the cut this year, he finished an average of 15.1 shots behind the winner.

“I have seen a few guys go to the Champions Tour and they seem to have a miraculous cure for their putting. I’m hoping that happens to me.” — Padraig Harrington, who turns 50 next August.