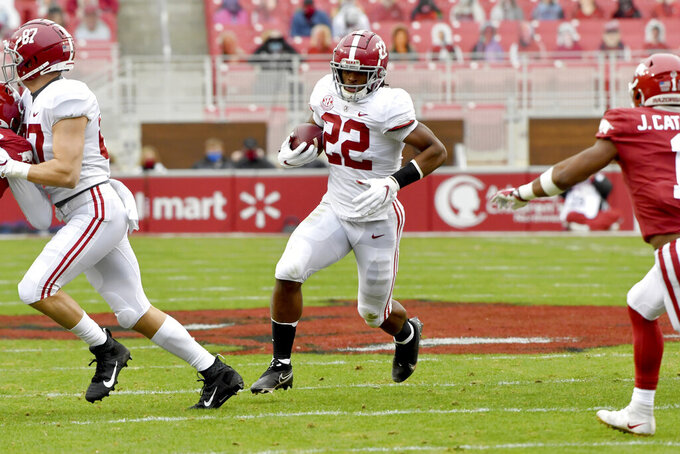 Alabama running back Najee Harris (22) runs the ball against Arkansas during the first half of an NCAA college football game Saturday, Dec. 12, 2020, in Fayetteville, Ark. (AP Photo/Michael Woods)

Since 2015, there have been 23 Power Five conference championship games and only two have been won by the point-spread underdog, according to ESPN research.

Last year, Oregon upset Utah in the Pac-12 championship, ending the Utes' playoff hopes. Penn State in 2016 was a slight underdog when it beat Wisconsin in the Big Ten championship game.

Still, it's fun to consider the possibility of the CFP selection committee being forced to pour over the wreckage after four or five of the top six teams in the latest rankings lose.

The Crimson Tide (10-0) has been so dominant this season, winning by an average margin of 32 points per game, that Alabama looks locked into to a playoff spot no matter what happens in the SEC championship game Saturday.

As for Florida, things looked bleak for the Gators over the weekend but the committee didn't seem to mind that loss to LSU as a three-touchdown underdog at home. Florida still sits seventh in the rankings. The SEC champion has never been left out of the playoff.

The Fighting Irish are No. 2 in the country and beat the Tigers in South Bend, but they still enter the ACC championship game as 10 1/2-point underdogs.

An Irish victory is the most likely lever to be pushed on the CFP chaos machine. Can a two-loss Clemson still make the field? Tigers coach Dabo Swinney has been pushing that position. If the committee keeps it simple, Texas A&M probably gets bumped up from fifth to fourth. It also could bring the Big 12 back into the mix with Iowa State sitting at sixth as it heads into the conference title game with tenth-place Oklahoma.

No two-loss team has ever made the playoff, but this has been an unprecedented season in so many ways already.

The Buckeyes (5-0) are getting a lot of benefit of the doubt from the committee, but that seems contingent on being perfect. Lose as a 20-point favorite in game No. 6 of the season and that goes away. The Wildcats (6-1) are too far back at No. 14 to do anything but play playoff spoiler.

The Aggies still have a regular-season game to play, and if they lose it, combined with a Clemson loss, the choices for the final CFP spot become a bunch of potential two-loss teams — unless the committee wants to break form and look at a potential unbeaten team from outside the Power Five such as Cincinnati (ninth) or Coastal Carolina (12th). Or the committee could look to the Pac-12, the forgotten Power Five conference. Southern California is unbeaten and 13th in the CFP rankings going into the conference championship game against Oregon.

Pac-12 championship: Oregon (plus 3) at No. 13 Southern California

First time the Ducks and Trojans have met in the Pac-12 title game and it took a COVID-19 outbreak at Washington to make it happen ... USC 31-24.

Bulls' only MAC championship came in 2008, when they upset an undefeated Ball State team ... BUFFALO 35-27.

Thundering Herd is making its first C-USA title game appearance since 2014, when it last won it ... MARSHALL 20-17.

Tide has won the last six SEC championship games in which it has appeared, including three straight double-digit wins against the Gators ... ALABAMA 45-23.

Trevor Lawrence is back after missing Round 1 between the Tigers and Irish due to COVID-19; Clemson trying to make it six straight ACC titles .. CLEMSON 28-20.

Sooners have won the last five Big 12 title; Cyclones are making their first appearance in the championship game ... OKLAHOMA 28-24.

American Athletic championship: No. 20 Tulsa (plus 14) at No. 6 Cincinnati

Bearcats can likely lock up a New Year's Six bowl with a victory ... CINCINNATI 31-13.

Sun Belt championship: No. 17 Louisiana-Lafayette (plus 3 1/2) at No. 9 Coastal Carolina

Ragin Cajuns have lost the first two Sun Belt championship games and the regular-season matchup against the Chanticleers ... LOUISIANA-LAFAYETTE 28-27.

Broncos have been in three straight conference title games and won two of them ... SAN JOSE STATE 31-27.