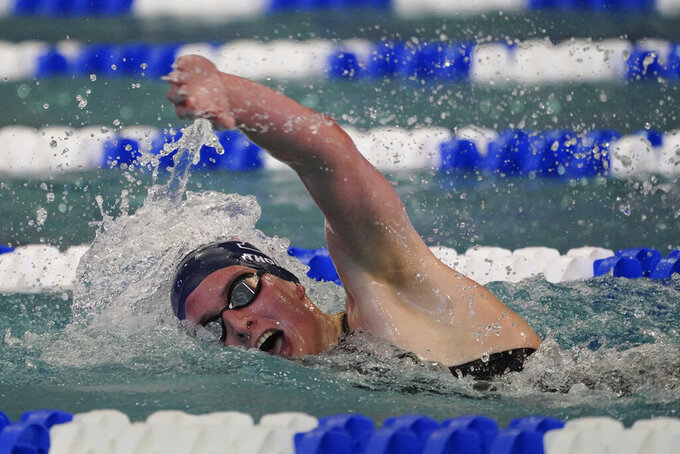 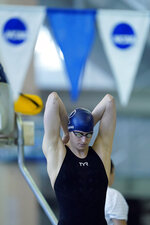 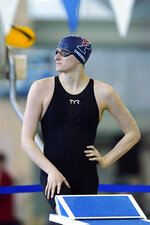 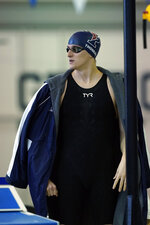 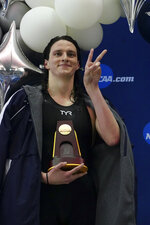 There is no doubt that transgender athletes such as Thomas have shown tremendous courage in the face of ridicule, scorn and discrimination.

They should be celebrated in every way possible.

But Thomas’ national championship in the women’s 500-yard freestyle, where she beat out three Olympic medalists, did not necessarily feel like a triumphant moment in the battle for civil rights.

In some ways, it didn’t feel right at all.

Which raises a complex question: Can one be a true supporter of transgender rights, while also maintaining that an athlete such as Thomas shouldn’t be allowed to compete in the women’s division?

Nancy Hogshead-Makar, who won three swimming gold medals at the 1984 Los Angeles Olympics and is now an outspoken proponent of women’s sports, maintains those seemingly opposing viewpoints are actually not at odds.

Hogshead-Makar considers herself a liberal on social issues. She also has made it clear that she thinks Thomas has a huge biological advantage that should bar her from taking part in women’s events.

“We’ve got people who are twisting themselves into pretzels trying to justify the fact that they didn’t get their act together and change the policy so that it’s fair for biological women,” Hogshead-Makar said in an interview Friday, less than 24 hours after Thomas became the first transgender swimmer to win a national championship.

It was almost exactly a year ago that I first opined on this issue in the wake of several states passing laws that barred transgender athletes from competing in high school sports.

In retrospect, it still seems most of these measures came from public officials looking to score political points rather than any genuine concern for the integrity of women’s athletics.

But my view that there was no example of an athlete gaining an unfair advantage after transitioning from male to female has been challenged by Thomas’ performance in the pool this season.

Competing as a male at the University of Pennsylvania, Thomas had some success but nothing of national significance. After going through hormone-replacement therapy and — let's make this clear — following the rules set up by the NCAA for transgender athletes, she joined the Penn women’s team and became one of the best college freestylers in the nation.

Qualifying for the NCAA women's championships at Georgia Tech in three events, Thomas overpowered the field in the closing laps of the 500 free Thursday night, touching 1.75 seconds ahead of everyone else.

What a field it was.

The runner-up, Virginia’s Emma Weyant, was a silver medalist in the 400-meter individual medley at last summer’s Tokyo Olympics. Third-place finisher Erica Sullivan of Texas also won a silver medal in Tokyo, behind the great Katie Ledecky in the 1,500 freestyle. Fourth place went to Stanford’s Brooke Forde, who earned an Olympic silver in the 4x200 free relay.

Thomas finished fifth in Friday night's 200 freestyle. She came into the meet as the top seed, just as she was in the 500, but touched more than 2 seconds behind Stanford Taylor Ruck.

Hogshead-Makar said Thomas’ times as a female swimmer show her biological advantage “has not been mitigated.”

In her eyes, Thomas' supporters are blending gender rights with the biological realities of sex.

“I want trans people to be happy. I want them to have full acceptance,” Hogshead-Makar said. “But this isn't fair to the women's category. You can hold those two things to be true at the same time.”

Then, just when you're thinking that your views are shifting on this issue, you speak with Laurel Powell from the Human Rights Campaign.

A transgender woman, Powell said “it breaks my heart" to see some of the hateful rhetoric that has been directed Thomas' way.

Powell says that Thomas is simply a convenient target for those with far more sinister motives in mind.

“If she wasn't winning, the folks opposed to trans people participating in sports would have found someone else to target,” Powell said. “This pivot to protecting women's sports and protecting Title IX is just a new front they've opened up when they couldn't win the bathroom bill fights.”

Powell scoffs at the idea that transgender athletes are going to spell the downfall of women's sports. She notes the relatively small transgender population, which shrinks even further when considering how many play high-level sports. She points to numerous sanctioning bodies, from the NCAA to the International Olympic Committee, long having rules allowing transgender people to compete without any major opposition until recently.

“There have been instances of trans people playing sports for a long time," Powell said. “None of them ever became champions, because champions are rare. You have to be very, very good at what you do to win a championship. I don't think a trans person being successful is anything other than a reason to celebrate."

Sullivan, the swimmer who finished third to Thomas, was the first openly lesbian swimmer to make the U.S. Olympic team and win a medal. She hasn't expressed any qualms about competing against Thomas, even telling Swimming World that ““I feel bad for Lia because imagine being on a team where you know some people don’t want you there.”

We'll leave the last word on this complex issue to Forde, the fourth-place finisher behind Thomas.

“Social change is always a slow and difficult process and we rarely get it correct right away,” she said. “Being among the first to lead such a social change requires an enormous amount of courage.”

Let's hope those who follow her — and those they compete against — are treated with fairness and equality.

In the end, that's really all we can ask.