Column: A little effort from men could do a lot for LPGA 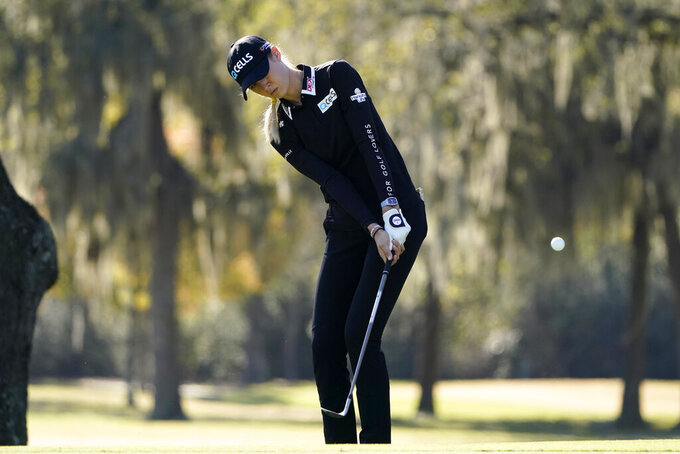 Nelly Korda chips on the 11th green during a practice round for the U.S. Women's Open golf tournament, Tuesday, Dec. 8, 2020, in Houston. (AP Photo/Eric Gay)

HOUSTON (AP) — The USGA is promoting a smart social media campaign with the hashtag “Women Worth Watching,” and already some PGA Tour players have weighed in that they'll be tuning in this week to the U.S. Women's Open.

It would be more plausible, of course, if any player ever admitted watching golf on TV when they weren't at a tournament.

But it's a start.

And it's an important conversation.

This was the very topic raised three months ago by Juli Inkster, who won the career Grand Slam while raising two daughters during her Hall of Fame career.

Inkster was doing television work in September at the ANA Inspiration, an LPGA major with rich tradition in the California desert that often gets overlooked because it falls a week before the Masters. It was postponed by the pandemic, and as (bad) luck would have it, this year it was held a week before the U.S. Open.

“I just wish the guys would talk about our majors the way we do about theirs,” Inkster said that day.

This would be a great opportunity.

The U.S. Women's Open starts Thursday at Champions Golf Club, which has the history of a U.S. Open and Ryder Cup and the heritage of being founded by Jack Burke Jr. and Jimmy Demaret.

It's the final major of the year. It long has been regarded as the biggest event in women's golf. And the PGA Tour is done for the year, except for the unofficial team event in Florida unofficially known as the Shark Shootout.

“It's a great time for the Open,” Inkster said by phone Tuesday, and then she returned to her original thoughts from September. “If we can get these guys to say, ‘The Women’s Open is on and I'm going to be watching,' that would be huge.”

Inkster was in her first year as Solheim Cup captain when a quartet of PGA Tour caddies, spearheaded by Jim “Bones” Mackay and John Wood, put together a video for Inkster to show the American squad. It morphed quickly from motivation to self-deprecation. This was in 2015, and the Americans had one Ryder Cup victory in the last seven tries.

"Michael Greller is sitting there talking strategy and then Wood looks over at Bones and says, ‘What’s your Ryder Cup record? Not very good. Why are we doing this?'" Inkster said. “It was awesome.”

Max Homa was among the first to weigh in three weeks ago by retweeting the USGA and adding the major season isn't done yet. This was Nov. 16, the day after the Masters. U.S. Open champion Bryson DeChambeau, Harris English, Marc Leishman and Jason Day have joined in. So has Gary Player.

It's not much. It doesn't need to be.

The PGA Tour and LPGA Tour announced a strategic alliance for areas such as schedule coordination, joint marketing programs, media representation and the possibility of joint tournaments. That was four years ago. The PGA Tour helped negotiate the LPGA's television rights, and that's about all anyone has seen from that partnership.

A deal was close on having each tour's Tournament of Champions on the same course at the same time. That didn't materialize, and the LPGA now has its own celebrity version in Florida.

The plan is for the World Cup to become a mixed-team event, and that might have been announced already except for being shelved by the pandemic when the tour was working out the final details.

Inkster is among those who lament the loss of the JC Penney Classic, which paired men and women at Innisbrook. Davis Love III was a regular. Tiger Woods played one year with Kelli Kuehne. Inkster played for years with Tom Purtzer. Along with good times, it raised the profile of the women's game.

Inkster isn't sure if the problem is finding a sponsor or interest among the men.

"I don't know if it's because the money on the men's side is so big they wouldn't play for a smaller purse or wouldn't want to travel," she said. “But every LPGA player would sign up in a heartbeat."

That would start with Women's PGA champion Sei Young Kim. She was asked Tuesday who she would want as a partner, and while she answered in Korean, no translation was necessary with words like “Rickie Fowler” and “Rory McIlroy” and “Tiger Woods.” Kim broke into a big smile when she said in English, “Everyone.”

Whether that can be resurrected is unlikely, in part because of an increasingly crowded global schedule. There is no longer an offseason, much less a silly season.

For now, just a little interest from the men could go a long way. They know the women's game. Several men played with women in Junior Ryder Cup competitions (Jordan Spieth and Lexi Thompson in 2008).

Brittany Lang, a past U.S. Women's Open champion, has noticed some of the tweets.

“It's really cool when the guys do that," she said. “It just brings people in, gives the girls a little bit more respect, I think, because a lot of the time I don’t think we get it.”

Nelly Korda added, “You need everyone kind of to get behind a movement, so I think if the PGA Tour players got behind this, it would spread like wildfire.”

It takes only a little effort. And it could do so much for the women's game.