Column: A major success getting in 7 major championships 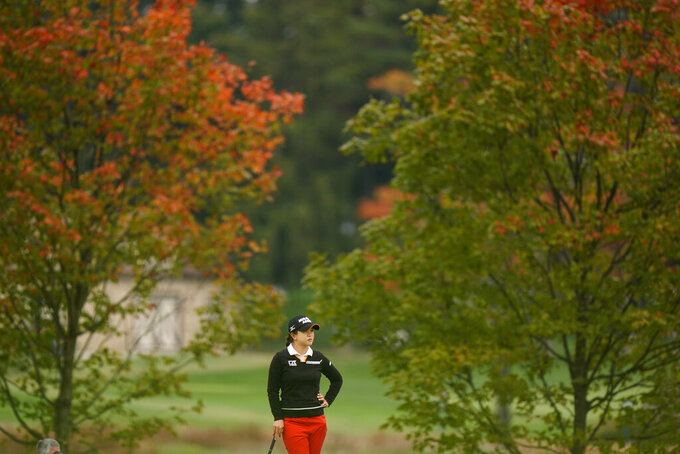 FILE - Sei Young Kim, of South Korea, waits on the 16th green during the final round at the KPMG Women's PGA Championship golf tournament at the Aronimink Golf Club in Newtown Square, Pa., in this Sunday, Oct. 11, 2020, file photo. Because of the pandemic, three of the seven golf majors for men and women were held in the fall. (AP Photo/Matt Slocum, File)

HOUSTON (AP) — Already the latest a major championship had ever been played, it was only fitting the U.S. Women's Open had to go an additional day because of rain.

Equally appropriate for the conclusion of this surreal season was the winner, A Lim Kim, wearing a mask while she played. “I'm OK to get positive tests for COVID-19, but I don't want to affect other people,” Kim said.

Mike Davis, the retiring CEO of the USGA, couldn't help but think about what almost was.

Imagine the USGA leaving the wintry chill of Houston on Monday and heading straight to Los Angeles for a U.S. Open at Riviera the week before Christmas. It was one day away from happening.

And it's a reminder that piecing together a major championship schedule among seven golf organizations in the middle of a pandemic was tougher than trying to hit a mud-splotched ball with a 5-iron.

Davis could only smile and shake his head on the eve of the Women's Open when thinking back to the possibilities and the last-minute phone calls as golf was trying to reconfigure a schedule that worked for everyone.

September was probably the latest the British Open could be played because of weather and daylight in England. The PGA Championship was going from May to August. The Masters was going from April to November. Davis said the USGA thought about consecutive weeks in December to stage a U.S. Open for women and men.

He said he called Los Angeles Country Club, site of the 2023 U.S. Open, but the greens on the North course were not ready. So he called Riviera Country Club, which asked for 24 hours to consider, and called back to accept.

“We were ready to go,” Davis said.

Press releases were prepared for the surprise announcement. And then the R&A concluded it could not host the British Open this year and would be forced to cancel. That freed up September, the USGA made sure the date would work with Winged Foot, and so it was.

That only one major — the oldest one — wasn't played is remarkable.

Between the men and women, golf staged seven majors in five U.S. states (two in California separated by one month, 500 miles and more than 50 degrees in temperature) and Scotland.

No tickets were sold.

The courses were not devoid of spectators because of player guests (a spouse, a parent); photographers, writers and support staff for the broadcast; and tournament and club officials. The Masters allowed Augusta National members, who only wore their green jackets if they were on a tournament committee (Peyton Manning apparently isn't on a committee yet).

Observers can only speculate whether the silence helped or hurt. Six of the seven winners had never won a major. Two of them — Sophia Popov in the Women's British Open at Royal Troon and Kim at the U.S. Women's Open — had never even played a major.

Rory McIlroy was among those who said he didn't do a good job adjusting to the lack of buzz. For those players who wondered how Tiger Woods dealt with chaos around him, he got a taste of their world with hardly anyone watching.

Everyone played in the same environment. The low score won. That didn't change.

The ANA Inspiration in the California desert moved from early spring to late summer, and when temperatures climbed toward 120 degrees, the LPGA Tour wisely allowed carts for caddies all week and for players during practice.

Augusta National was stunning in autumn colors, and while it looked mostly the same on TV, spells of warm weather kept the Bermuda grass from going entirely dormant, leading to a different variety of shots. The course was so soft that players took aim at spots on the greens they never would contemplate in April.

Turns out Augusta National can't control everything. Who knew?

And yes, the climate from late fall led to some mud on golf balls at the Masters and U.S. Women's Open, which was smartly referred to by Dottie Pepper on the CBS broadcast at Augusta National as “organic matter.”

Through it all, golf was seamless.

Johnson was the biggest star to test positive for the coronavirus, costing him two tournaments. Sergio Garcia and Joaquin Niemann had to withdraw from the Masters. Jin Young Ko, the No. 1 player in women's golf, played it safe by staying home in South Korea and skipping three majors. She was runner-up in the U.S. Women's Open by one shot.

It was nothing like the NBA bubble in Florida. The PGA Tour, Champions and LPGA Tour combined to play 44 domestic tournaments in 24 states. There were no stoppages, no last-minute changes like in football.

USC began this week preparing to play Washington in the Pac-12 Championship, only for Washington to cancel because of COVID-19 and be replaced by Oregon. Imagine turning up at Winged Foot for a day of practice and being told the U.S. Open instead would be played at Oakmont.

The seven majors were played in a span of 130 days, even with an extra day in Houston. The ANA Inspiration is 107 days away. No telling what 2021 will bring. But if golf can make it through this year, it should be ready for anything.