Column: A Masters unlike any other — and one we didn't need 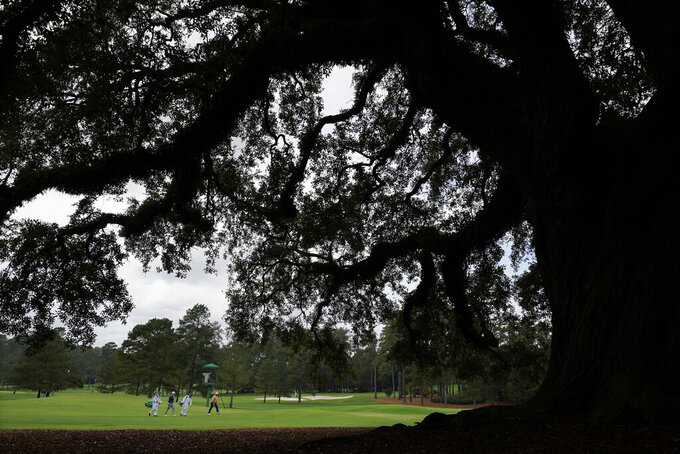 Graeme McDowell, of Northern Ireland, and Shane Lowry, of Ireland, walk down the 18th fairway during a practice round for the Masters golf tournament Wednesday, Nov. 11, 2020, in Augusta, Ga. (AP Photo/Charlie Riedel)

AUGUSTA, Ga. (AP) — Strolling through Amen Corner, unencumbered by ropes or patrons or all the usual trappings of a Masters, you’re struck by the silence.

There are no raucous roars.

Not even a few soothing chirps.

The birds certainly recognize this is no time to be playing a tournament at Augusta National.

We won’t hold it against the players, all of whom seem justifiably grateful for the chance to claim a green jacket before the calendar mercifully flips past the abomination known as 2020.

But it’s hard to see any justification — beyond the hundreds of millions of dollars in television revenue, of course — for salvaging what is supposed to be the first major of the season a few weeks before Thanksgiving.

This is the Masters in name only.

A tradition unlike any other has the overwhelming feel of a nondescript college tournament.

“Oh, so different,” said Tony Finau, gazing out over the immaculate desolation. “The golf course is still amazing. But it just looks so different.”

That’s the problem: The Masters is more than just booming tee shots and imaginative wedges and clutch putts.

It’s the tawdry scene just beyond the gates on Washington Road, complete with John Daly hawking merchandise from his camper in the Hooters parking lot.

It’s the scalpers lingering at most every corner, offering to buy and sell the coveted badges that allow one onto the hallowed grounds.

It’s the jacked-up prices in any decent restaurant, the plethora of private homes that are transformed into lodging for the out-of-towners, the once-a-year reunions that are cherished by lovers of the game from all over the world.

If you're not one of the rich and famous, landing a table at Tbonz steakhouse — right down the road from Magnolia Lane and perhaps the city's most famous restaurant — usually requires something just short of divine intervention during the Masters.

Not so on Wednesday, less than 24 hours before the start of this weak imitation of a major championship.

“We've been pretty busy, but certainly nothing like a normal Masters week,” said a worker who answered the phone at Tbonz.

Asked the chances of a party of four grabbing dinner around 8 o'clock, he replied, “You shouldn't have any problem getting a table.”

Walter Clay owns two popular Augusta eateries, the French Market Grille and Raes Coastal Cafe. He chuckled when asked if this is what the city usually looks like during the 51 non-Masters weeks of the year.

Of course, this is the way it had to be if the Masters was going to be held in 2020. The traditional slot during the first full week of April came in the early days of the coronavirus pandemic, when the nation locked down in hopes of containing the rampaging disease.

Everyone's world was thrown into chaos, and golf was hardly spared. The Masters and two other major championships were bumped to later in the year. The British Open was canceled altogether.

Now, in a sad twist, the Masters is finally being held just as the virus cuts another frightening swath through America. New cases have climbed to more than 100,000 per day. Deaths are on the march again, approaching 1,000 every 24 hours.

In what turned out to be a very wise decision, Augusta National announced back in August that no fans would be allowed to attend the rescheduled tournament.

Yet, even though we knew it was coming, it is still jarring to find yourself walking down a pathway at Augusta National and suddenly realize there is not another person in sight. Or to wander out on the course and find the only thing separating you from the fairway is a faint black line painted on the luscious grass.

With no fans, the club didn't have any need to put up the maze of ropes that have always set the boundaries for the Masters.

“The first thing that stands out is just no ropes,” two-time winner Bubba Watson said. “I’ve been lucky enough to come in here weeks before the tournament usually and practice without the ropes and play with a member and stuff. That’s kind of the feel right now.”

Come Sunday, the lack of fans will surely be what stands out the most. The roars that drift over every corner of the property, perhaps signaling to a golfer who hasn't even teed off that a competitor is making a move out on the course.

“You’re on the putting green up on 1 and you can hear eagles down on 13,” Woods said. “That’s what this tournament is all about, and we’re not going to have that this year. It’s going to be very different.”

Those cheers helped carry Woods to his improbable victory in the most recent Masters, 19 long months ago in a world that had yet to be exposed to the terror of COVID-19.

“They helped me win,” Woods recalled. “The support that I had, the energy that was around the property, it was electric that day.”

The only roar on Wednesday was the weather horn, signaling an approaching storm that cut short the final hours of practice.

Call it an omen.

This was a Masters we really didn't need.