Column: May deaths of Katie, Sarah and Lauren not be in vain 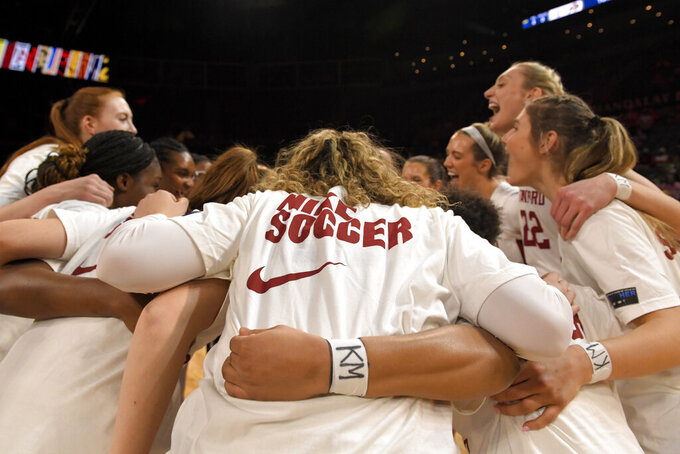 FILE - Stanford players huddle before an NCAA college basketball game against Oregon State while wearing warmup shirts honoring the school's soccer team goalkeeper Katie Meyer, who helped Stanford win a national championship, in the quarterfinals of the Pac-12 women's tournament, March 3, 2022, in Las Vegas. There has been a lot of talk about the mental health struggles that many young athletes face, the pressures and vulnerabilities that can seem overwhelming — especially to those who feel compelled to shield their pain from the outside world. (AP Photo/David Becker, File)

There’s been a lot of talk about the mental health struggles that many young athletes face, the pressures and expectations that can seem overwhelming — especially to those who feel compelled to shield their pain from the outside world.

Sadly, it won’t come soon enough to help three female college athletes who took their own lives in the past two months, leaving behind unbearable grief for their family and friends and inevitable questions about what could’ve been done to show how much they had to live for.

Katie Meyer was a soccer goalkeeper who helped Stanford win a national championship.

Sarah Shulze was a runner at Wisconsin who earned All-Big Ten academic honors in track and cross country.

Lauren Bernett was a catcher on the James Madison softball team who had just been picked as the Colonial Athletic Association’s player of the week.

For Olympic swimming champion Allison Schmitt, who struggled with depression after her brilliant performance at the 2012 London Games, the deaths of Meyer, Schulze and Bernett were heartbreaking.

“To anyone out there struggling. I know it’s hard. You may feel weak, you may feel alone. But please, please reach out,” Schmitt said late Friday evening. “No one chooses to feel depressed or suicidal, no one dreams of being suicidal. But this feeling is a reality, a reality for many people and their families.”

This is not to ask why, as perplexing as that question may be to so many of us who weren’t privy to what any of those three athletes were going through.

Instead, let’s renew our commitment to helping those in need, to be ever-vigilant for even the slightest sign that someone is struggling, to approach them with love and compassion rather than judgment and condemnation.

That approach is especially important to those who are such accomplished athletes.

As we’ve learned from stars including Olympic gold medal gymnast Simone Biles and tennis great Naomi Osaka, one’s worth as a human being shouldn’t be determined by wins and losses.

“There’s always this need to ask, ‘Why? Why? Why?’” said Jane Timmons-Mitchell, an associate clinical professor of psychology at Case Western Reserve University in Cleveland. “I put a bigger emphasis on the, ‘What?’ What can we do about it? How can we be the most help and the most effective?”

Meyer was 22 when took her life on March 1 at her campus residence.

On the field, she memorably thwarted two penalty shots to help the Cardinal defeat North Carolina in the 2019 national championship game. In the classroom, she was a senior majoring in international relations.

Her father, Steve Meyer, told NBC’s Today show that she was possibly distraught over the prospect of disciplinary action from the university for “defending a teammate on campus over an incident.” Whatever the case, the suicide left a hole for her loved ones that will never truly heal.

Shulze was 21 when she took her life on April 13. In addition to her success as an athlete and student, family members said she had interned with the Wisconsin state legislature and volunteered as a poll worker during the 2020 presidential election.

“Balancing athletics, academics and the demands of everyday life overwhelmed her in a single, desperate moment,” her family said in a statement. “Above all other things, Sarah was a power for good in the world.”

Bernett was the 20-year-old cleanup hitter for the James Madison softball team, part of a team that improbably made a run to the Women's College World Series in 2021.

On Monday, she was honored as CAA player of the week for batting .778 with seven RBIs and four runs in a three-game weekend sweep of Drexel that pulled the Dukes within a game of league-leading Delaware.

On Tuesday, the school announced her death. The local sheriff said it was being classified as an apparent suicide, though the investigation is continuing.

Suicide is one of the leading causes of death on college campuses, and student athletes often walk a delicate mental tightrope attempting to balance classwork and athletics. With the media exposure that many top-level programs get, the pressure to succeed is even greater.

For female student-athletes, there can be additional stresses such as eating disorders, brought on by issues over weight and body image.

“We know female athletes are at higher risk for eating disorders,” said Dr. Jessica Moore, a psychiatrist at Dallas’ UT Southwestern Medical Center who has published research on the stresses of college life. “If you have an untreated eating disorder, you’re much more at risk for suicide attempts.”

Like Timmons-Mitchell, Moore said it’s more important to address the societal barriers that can affect mental health treatment, rather than scrutinizing an individual, often-isolated decision to take one’s life.

“‘Why?’ is a complicated question, and it’s likely multi-faceted,” Moore said Friday in a telephone interview. “It’s more helpful to think about what systemic things might play a role. How do we improve access to care? How can we ensure that someone is not being stigmatized for seeking help? How can we ensure they have time to go to counseling appointments in order to get help?”

The COVID-19 pandemic only exacerbated the mental health struggles that many college students were already facing.

Student athletes were certainly not immune to the devastating impact.

“One of the things that goes on in a pandemic is the incredible isolation,” Timmons-Mitchell said. “For athletes, they may begin to feel that their only contact with others is through their competitive venture. Even as much as you may love it ... you can begin to feel that’s your only identity.

We can only hope that others aren’t swept away by that storm. Come July, the country is set to launch a new 988 number for the suicide prevention hotline, which should make it easier for those in need to get help.

Fortunately, Schmitt made it out.

Meyer, Shulze and Bernett did not.

May their deaths not be in vain.