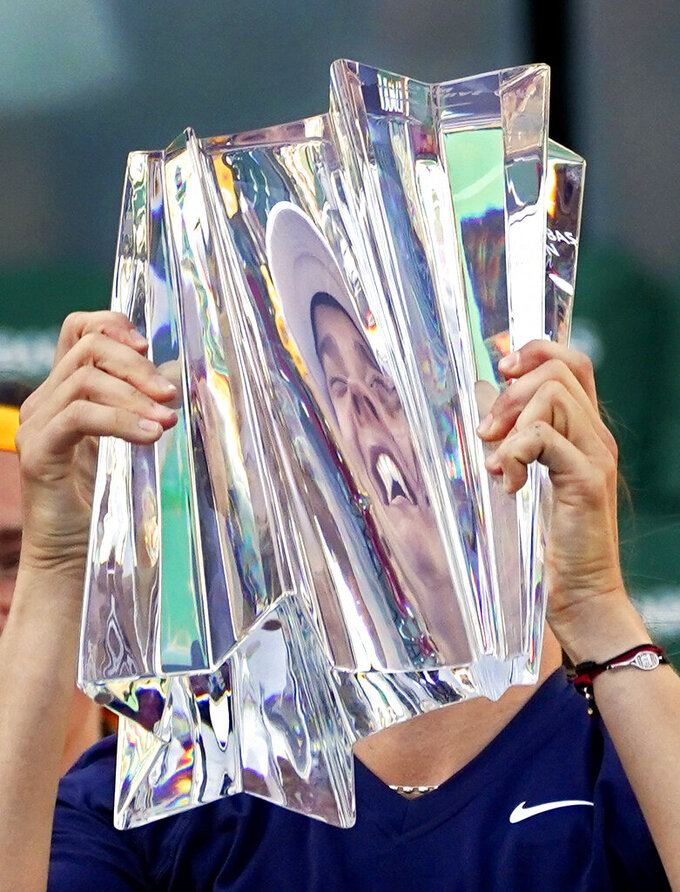 FILE - Paula Badosa, foreground, of Spain, is viewed through her trophy as she begins to hold it up after defeating Victoria Azarenka, left, of Belarus, in the singles final at the BNP Paribas Open tennis tournament Sunday, Oct. 17, 2021, in Indian Wells, Calif. The photo was part of a series of images by photographer Mark J. Terrill which won the Thomas V. diLustro best portfolio award for 2021 given out by the Associated Press Sports Editors during their annual winter meeting. (AP Photo/Mark J. Terrill, File) 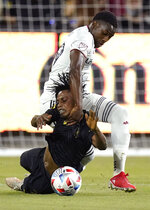 The judges said Graves' efforts on Biles' struggles at the Tokyo Olympics “showed his expertise on the subject, his connection with Biles as a source and it came through in his ability to report and write her story."

Graves also won the Grimsley Award for body of work, including “'This can be me’: Black participation rising in gymnastics," and “ Viral and vital, college gymnasts finding their voice. "

A team of AP writers, including Tim Reynolds, Brian Mahoney, Kyle Hightower, Eddie Pells, Teresa Walker and Cliff Brunt, along with photo and video editors Alyssa Goodman, Darrell Allen, Ragan Clark and Cody Jackson won Package of the Year for the coverage of the early installments of the ongoing NBA at 75 series. This category honors a reporter or team that produced a package or project that included multiple pieces of content, including stories, photos and photo galleries, video, graphics and interactives.

The goal of this category is to award AP’s most ambitious journalism that tells great stories and makes strong use of digital presentation and social media.

Judges said “this package had everything. If you are an NBA fan you need to spend some quality time with all this content."

In the photo competition, Mark J. Terrill won Best Portfolio for his collection of work including images in a series of photos featuring MLB, NHL, NBA and soccer game action, along with feature art and a portrait.

Other photography awards went to:

David Goldman won in Feature Photo for his image of Japan's Miho Nonaka as she receives her silver medal and a bouquet of flowers with chalk covering her hands during the women’s sport climbing final victory ceremony at the 2020 Summer Olympics.

Ashley Landis won Action Photo for the image she captured of Sha’Carri Richardson celebrating after winning the fourth heat during the women’s 100-meter run at the U.S. Olympic Track and Field Trials Friday in Eugene, Oregon.

For more on APSE: https://www.apsportseditors.com/category/apse-conference/2022-winter-conference/