COVID-19 quarantine lapses often start at the top Down Under 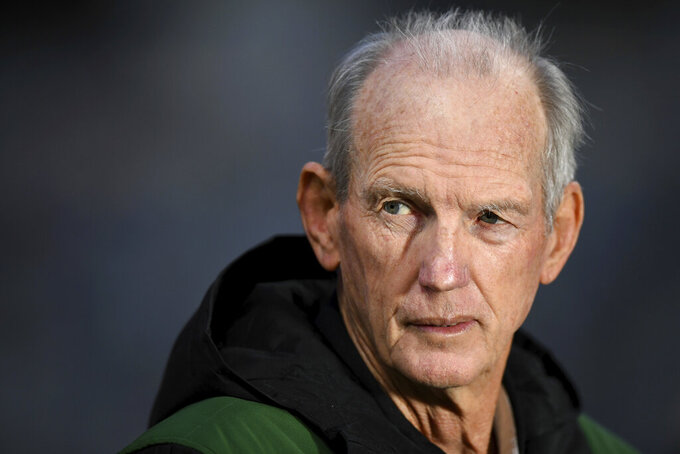 In this July 18, 2020, photo, National Rugby League Rabbitohs coach Wayne Bennett watches his players during a match in Sydney, Australia. Bennett could face a stint in 14-day quarantine after admitting he ate at a Sydney restaurant on Wednesday, Aug. 5, 2020, in a breach of the NRL's COVID-19 quarantine restrictions. (Joel Carrett/AAP Image via AP)

BRISBANE, Australia (AP) — From a renowned rugby league coach eating lunch at an Italian restaurant in Sydney to an Aussie rules great playing tennis with Australia’s Fed Cup captain across the country in Perth, high-profile sporting identities have been running afoul of COVID-19 quarantine restrictions Down Under.

Add to that tally a prominent club captain's wife who received a facial treatment at a spa outside the Australian Football League's so-called bio-secure bubble on the Gold Coast and was caught out when she posted a photo on social media.

The results of the infractions are tens of thousands of dollars in fines and enforced isolation at a time when many professional sports leagues in Australia are trying to get their seasons back on track, or even started.

The highest-profile culprit is Wayne Bennett, who has won seven top-flight championships and has coached national teams in Australia, Britain and New Zealand. The National Rugby League placed Bennett in a 14-day “COVID Hold” after he admitted he and his partner ate at a Sydney restaurant on Wednesday, in a breach of the league's biosecurity guidelines.

Bennett, who was a member of a committee to help set up the NRL’s return to play protocols, on Thursday said he didn't believe he was breaking the rules, and that he was confused over his limitations.

However, under the NRL’s bio-security rules designed to keep the league in play during the pandemic, players and selected club officials cannot have visitors or go to pubs, cafes or restaurants.

Bennett and St. George-Illawarra forward Paul Vaughan, who visited a cafe just hours before the Dragons’ match with the Sydney Roosters, were ordered to quarantine for 14 days and undergo testing for COVID-19 before being allowed to return.

The sanction meant Bennett was barred from guiding his South Sydney Rabbitohs in Friday night’s match against his former club, the Brisbane Broncos.

“We are living in extraordinary times and we must do everything in our power to ensure the health and safety of our players, staff and the general community,’’ NRL chief executive Andrew Abdo said in a statement. “This is a regrettable decision but today’s actions will operate as an important reminder to our players and staff about the importance of strict adherence to the protocols.

“Our players and staff have made significant sacrifices to ensure the season can proceed. I have sympathy for the liberties they have had to give up and I am proud of how well the overwhelming majority have complied with our protocols."

There have also been regulation-breakers in the homegrown sport of Aussie rules.

And Brooke Cotchin, the wife of the Richmond Tigers’ two-time premiership-winning captain Trent Cotchin, has cost the club A$20,000 ($14,300) after she breached bio-security protocols this week in Queensland state.

She went to a beauty salon to get a facial treatment and posted about it on social media before quickly deleting it, but it was too late. She wrote on Instagram: “The most incredible experience today …. My skin was in desperate need of some love. I knew I was in the right place as soon as I walked through the doors ...”

It marked one of four breaches in a week from within the AFL, leaving league chief Gillon McLachlan upset that protocols are not being taken seriously. All the Melbourne-based AFL teams have been relocated interstate, mostly to Queensland, because Victoria state is back on high-level lockdown amid a second wave of COVID-19 infections. The league has given assurances to various levels of government regarding its bio-security plan to keep players and the community safe.

Yet Carlton and the North Melbourne Kangaroos were hit with the same financial penalty for similar offenses last week, while Hawthorn was fined A$50,000 ($36,000) with half of it suspended.

The Kangaroos took a group of players' partners to a game in the belief the club had permission from the AFL. The group was taken on a private bus and hosted in corporate boxes away from the players and public.

Carlton was fined for a breach involving a player’s child ‘visiting a theme park.'