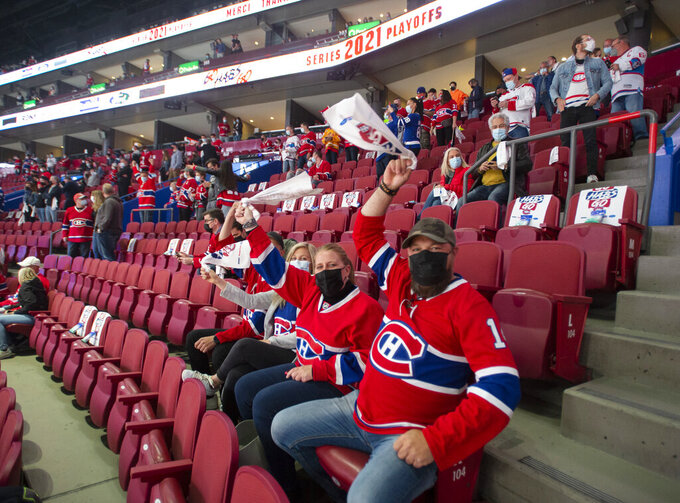 Fans watch players warm up for Game 6 between the Toronto Maple Leafs and the Montreal Canadiens in an NHL hockey Stanley Cup first-round playoff seres Saturday, May 29, 2021, in Montreal. With easing of COVID-19 restrictions, 2,500 fans were allowed to attend. (Ryan Remiorz/The Canadian Press via AP)

OTTAWA, Ontario (AP) — The NHL and health authorities are reportedly working on a travel exemption that would let the winner of the all-Canadian North Division and an American opponent cross the border during the final two rounds of the playoffs, including the Stanley Cup Final.

The exemption would let teams enter Canada for games without having to isolate for 14 days, as is currently required for non-essential travelers because of the pandemic, The Canadian Press reported Sunday, citing two people with the federal government who spoke on condition of anoymity because they were not authorized to speak publicly.

The NHL has been working to secure approval from public health authorities in the provinces and cities that still have teams in the playoffs — Winnipeg, Toronto and Montreal, the people told CP. Final approval rests with federal Immigration Minister Marco Mendicino.

In an email to CP, NHL deputy commissioner Bill Daly said the effort was "a work in progress.”

The winner of Monday night’s Game 7 between Montreal and Toronto will play the Jets in the North Division final. The winner of that series will face one of three American division winners in the league semifinals. The two semifinal winners will square off for the Stanley Cup.

Cross-border travel in the NHL has been virtually non-existent since the pandemic hit North America last spring. Last summer, the NHL concluded its season with playoff hubs in Toronto and Edmonton, but all American teams crossed the border just once to open play.

For this season, the league put all seven Canadian teams in one division, and they exclusively played each other to avoid cross-border travel. The NHL had said it was considering having the division winner relocate to the U.S. for the final two rounds unless the government relents..

Montreal became the first Canadian team to host a crowd on Saturday when 2,500 fans watched the Habs beat the Maple Leafs in overtime. That crowd was significantly smaller than those permitted in most U.S. venues for all sports, inlcuding the NHL.