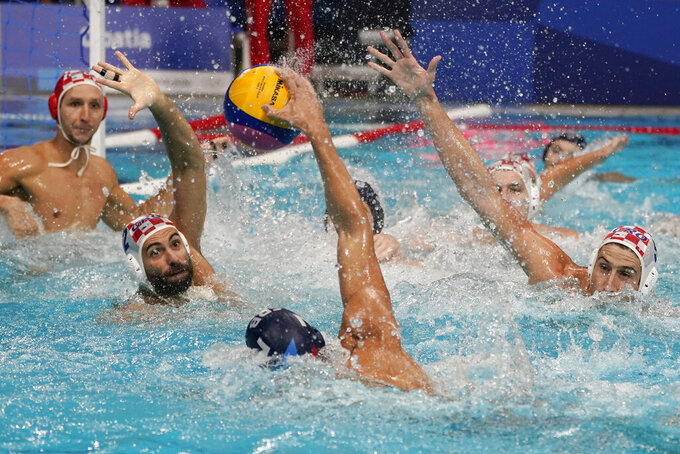 TOKYO (AP) — Marko Bijac is playing in his second Olympics with Croatia's water polo team, so the goalkeeper wasn't about to make too much of the team's victory over Serbia.

Or any part of group play, really.

“We need to be focused on our game and try to play each game better than the last one,” Bijac said. “That's the only right way that we need to think.”

Croatia did just that in a matchup of past two Olympic champions, outslugging Serbia 14-12 behind four-goal performances by Maro Jokovic and Paulo Obradovic.

Croatia's victory set the field for Wednesday's quarterfinals, with the matchups still to be determined on the final day of the preliminary round. Australia, Kazakhstan, Japan and South Africa have been eliminated from medal contention.

Croatia won gold in 2012 and then lost to Serbia in the Rio final. So while Bijac knows there is a long way to go, he acknowledged the importance of the win against perhaps the team's biggest rival.

“Serbia is the Olympic champion and whoever beats them, it means that team is on the right way,” said Bijac, who finished with 15 saves. “But this is still group phase, and the most important things are ahead of us.”

Nikola Jaksic scored three goals for Serbia, and Filip Filipovic finished with two. Filipovic was chosen as the MVP of Serbia's championship in Rio.

Serbia had to rally after Croatia opened a 5-1 lead on Obradovic's goal with 2:30 left in the first period. The game was tied at 8 in the third before Croatia pulled away again with four straight goals.

“Bad beginning and the worst ending,” Serbia coach Dejan Savic said. "We had a little bit of confusion in our defense. I don’t remember when the Serbian team ever conceded 14 goals.”

Spain, Montenegro, Hungary, Italy and Greece also won on Saturday. Spain beat Australia 16-5, Montenegro topped Kazakhstan 19-12 and Hungary held off the U.S. for an 11-8 victory. Italy posted a 16-8 win against Japan, and Greece rolled to a 28-5 victory against South Africa.

Spain and Croatia meet on Monday for the Group B title. Greece, Hungary and Italy are in the mix for the top spot in Group A.

Then the real fun begins.

“I think everybody hides something for quarterfinal,” Savic said. “Quarterfinal is the worst and most important game on Olympic Games.”

Before Croatia's victory, Hungary earned its third straight win since losing 10-9 to Greece in its opener in Tokyo. Krisztian Manhercz scored three times, and Marton Vamos had two goals on two shots.

Hungary trailed 4-3 in the second quarter before ripping off six straight goals. The U.S. didn't score again until Alex Obert buried one with 6:20 left.

“We kick ourselves from the rhythm because we didn’t score from man-up (chances),” U.S. coach Dejan Udovicic said.

"They are the European champions. If you don’t convert your chances, they’re going to punish you, and that’s exactly what happened.”

The U.S. made five of its 16 shots with the man advantage in its second straight loss. Center Ben Hallock said it was a mixture of Hungary's defense and not enough movement by the U.S.

“They executed better than we did on man-up, for sure,” Hallock said.