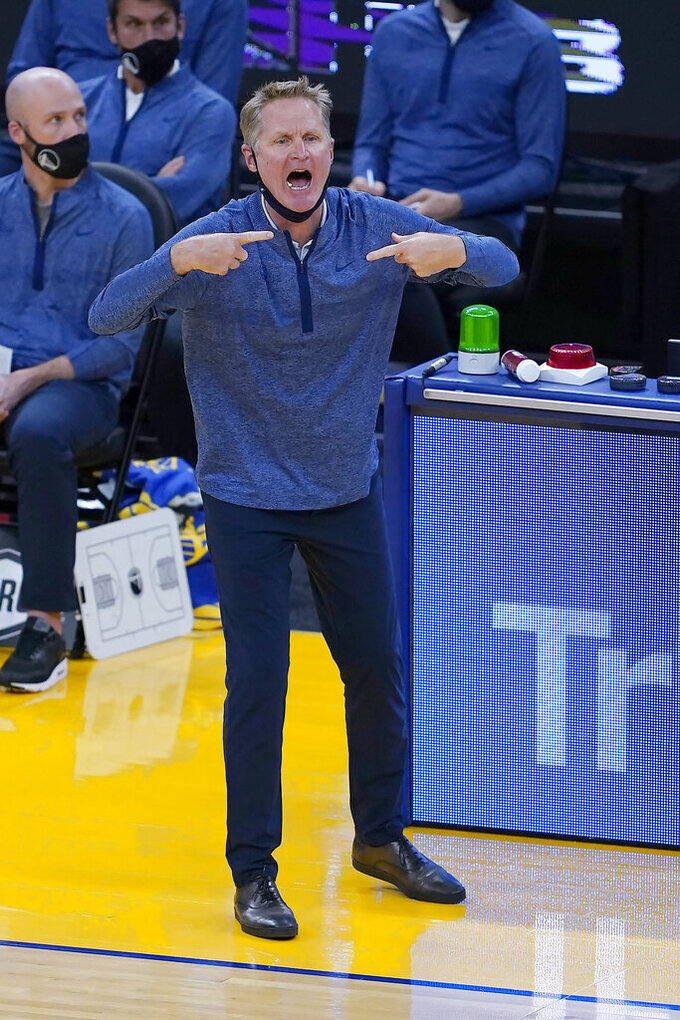 Golden State Warriors coach Steve Kerr yells out to players during the first half of the team's NBA basketball game against the Portland Trail Blazers in San Francisco, Friday, Jan. 1, 2021. (AP Photo/Tony Avelar) 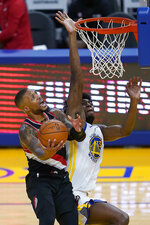 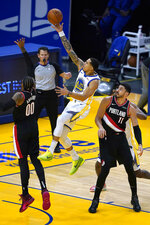 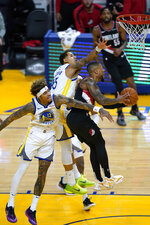 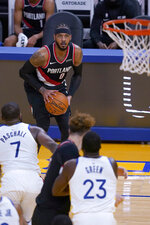 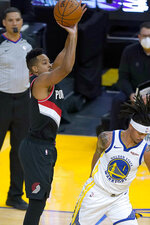 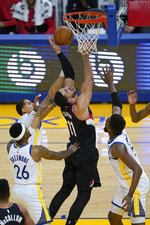 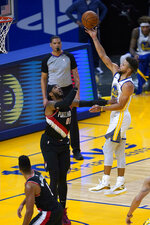 SAN FRANCISCO (AP) — Damian Lillard joined Hall of Famer Clyde Drexler as the only Portland players to score 15,000 points for the franchise, finishing with 34 as the Trail Blazers spoiled Golden State's home opener with a 123-98 win over the Warriors on Friday night.

“Fifteen thousand is a huge accomplishment, something that I’m proud of but my work is far from done,” Lillard said.

CJ McCollum added 28 points for Portland, knocking down 4 of 5 3-pointers early as the Trail Blazers hit 10 of 15 from long range to start the game. McCollum became the second player in NBA history to make 25 or more over the first five games of a season.

Stephen Curry did it twice. He shot just 4 for 12 from deep and had 26 points, eight rebounds and five assists for the Warriors, Andrew Wiggins scored 15 and Kelly Oubre Jr. contributed 10 points in his first home game with the team.

Golden State finally got back to Chase Center for its first home game in a 297-day span. But the Warriors took another lopsided loss following a 2-2 road trip in which they were outscored by 65 points in defeats at Brooklyn and Milwaukee then won at Chicago and Detroit by a combined 11 points.

"They came out smoking hot, they were making everything," coach Steve Kerr said.

Lillard, from the Warriors’ former city of Oakland, shot 11 for 21 with six 3-pointers and also dished out eight assists. He averaged 43.7 points, 5.7 rebounds and 8.0 assists in three games against the Warriors last season — including a 61-point performance on Jan. 20, 2020.

Draymond Green didn't score and had four rebounds, four assists and four fouls over nearly 18 minutes making his season debut for Golden State, his first game since Feb. 27 against the Los Angeles Lakers and a stretch of 309 days. He had been sidelined the first four games by a right foot injury after being delayed starting training camp because he had the coronavirus.

“Draymond just looks like he’s getting his wind. He looked like a guy who missed training camp and has been working his way to get onto the floor,” Kerr said. “It looked like an exhibition-style game for him. That’s not a criticism, it’s just where he is physically.”

No. 2 overall draft pick James Wiseman gave Golden State a scare when he went down grabbing his left ankle late before walking off on his own. It wasn't serious and he is expected to play Sunday.

Images of the late Clifford Robinson wearing both Warriors and Blazers jerseys were shown on the big screen during a first-quarter break. He died Aug. 29 at age 53.

The Warriors moved their championship banners down beneath one basket, a nice touch for fans to glimpse on TV.

The Warriors played at home on New Year’s Day for just the fourth time in franchise history and the first time since a 125-93 win against the Kansas City Kings in 1982 for the 499th career coaching victory by Warriors Hall of Famer Al Attles.

“I’m happy the year is ending, like most people. It’s been a lousy year for everybody,” Kerr said leading into the game. “As a coach my job is to remind our players that better times are ahead, on and off the court. On the court we had the worst record in the league in 2020. ... If you look at the off-the-court stuff, there is a light at the end of the tunnel with the vaccines and with just a glimpse of the future and we’ve got to all continue to try to inspire others to be smart, be safe, try to protect each other, wear our masks and be really patient and understand that we’re all going to get through this eventually. It’s not going to happen overnight.”

Trail Blazers: F Rodney Hood was limited to five minutes because of a cramp in his left quadriceps. ... Drexler scored 18,040 points. In Lillard's 620th game played, he tied Larry Bird as 21st-fastest in NBA history to score 15,000 points and fourth among active players behind LeBron James, Kevin Durant and Carmelo Anthony. ... Anthony's 18 points gave him 26,499 and he passed Tim Duncan (26,496) for 14th place on the all-time NBA scoring list.

Warriors: The Warriors began 3 for 12 to fall behind 22-7. ... Golden State played its first home game since March 10 against the Clippers. ... Curry has made a franchise-record 76 straight free throws. Curry hasn’t missed at the line since March 29, 2019, vs. Memphis, then began the current streak that same game. ... Andrew Wiggins (15 points) has scored in double figures every game so far. ... C Marquese Chriss underwent surgery Thursday to stabilize his right ankle joint after a suffering an ankle and fibular fracture during practice in Chicago on Dec. 26. He will immediately begin rehab and is slated to be re-evaluated in about three months.

After the rivals’ first meeting in nearly a year since Portland’s 129-124 overtime win at home on Jan. 20, 2020, they meet for the second game of their series Sunday night back at Chase Center as Golden State continues a season-high stretch with seven straight home games.

“The nice thing is cutting back on the travel,” Kerr said.