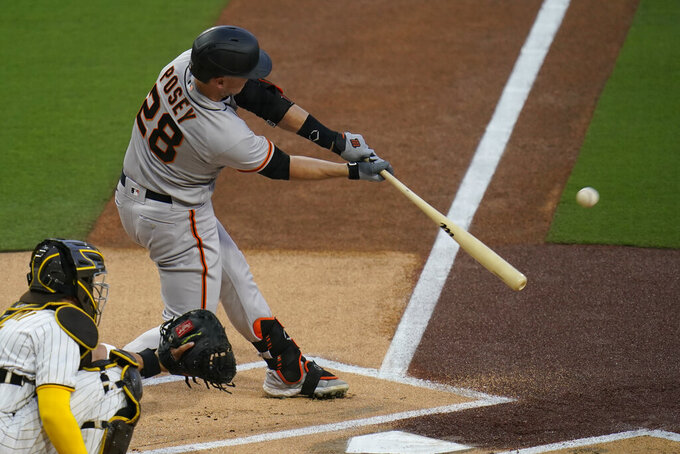 Darvish (3-1) allowed one run and four hits, including Buster Posey's homer, in 6 1/3 innings. He gave up a single and walked two in the seventh, and left with the bases loaded and one out.

“I really want to go deep into the game, six and seven innings,” Darvish said through an interpreter. “Obviously I was able to get a lot of strikeouts tonight, but I feel like there is still work to be done.”

Tim Hill relieved with a 3-1 lead and pinch-hitter Darin Ruf hit a drive near the right-field foul pole that was originally ruled a home run. After a short video review, the call was reversed to a foul.

Hill struck out Ruf a few pitches later and then fanned Mike Tauchman to end the threat.

“From my vantage point, I couldn't tell, ” Padres manager Jayce Tingler said of the disputed home run. “There is a pause (during the review) and for Tim Hill to maintain composure and stay in the strike zone and get those punch-outs was huge.”

The Giants scored in the eighth on Evan Longoria's double play grounder. Mark Melancon pitched a scoreless ninth inning to earn his major league-leading ninth save.

Jurickson Profar hit a tiebreaking, two-run single in the sixth for a 3-1 lead off Logan Webb (1-2).

“I was just trying to put the ball in play. They (Giants infield) were playing up,” Profar said. “When he (Darvish) is locked in, good luck.”

Giants shortstop Brandon Crawford was hit by a pitch from Darvish in the left calf in the fifth. He remained in the game to run, but was removed prior to the Padres batting in the bottom half.

Posey homered in the first. It was Posey’s sixth homer of April, the first time he has hit six homers in a month since May 2017.

“On the ball Posey hit, I thought that was a good pitch and that is a good hitter putting a good swing on it,” Padres manager Jayce Tingler said. “After the Posey home run I thought Yu was really in control. ... Darvish was outstanding tonight. I thought he got better, honestly, as the game went.”

“Webb threw the ball as well as he has all year. He definitely gave us a chance to win," Posey said. “He (Darvish) is one of the best (pitchers) in the game.”

Giants: RHP Johnny Cueto, on the 10-day IL with a right lat strain, has a side session scheduled for Saturday. “Things are moving in the right direction with him. He’s feeling good,” manager Gabe Kapler said. ... LHP Jarlín García (left groin strain) threw an inning at the alternate training site on Thursday. ... Kapler said the Giants are 13 days away from reaching the 85% vaccination rate needed for easing protocols. He said the last group got its second shots yesterday.

Padres: RHP Chris Paddack was placed on the injured list Friday with what manager Jayce Tingler described only as “a medical condition.” Asked if it was related to COVID-19, Tingler said: “I cannot get into it. I wish I could give you details, I can’t. All I’ll say is it’s a medical condition.” The Padres did not specify if it was the 10-day injured list. Paddack (1-3, 5.40 ERA) last pitched on Tuesday at Arizona, taking a 5-1 loss after giving up five runs, three earned, and six hits in 5 1/3 innings.