Davis could miss Lakers' 1st game back after poke in eye 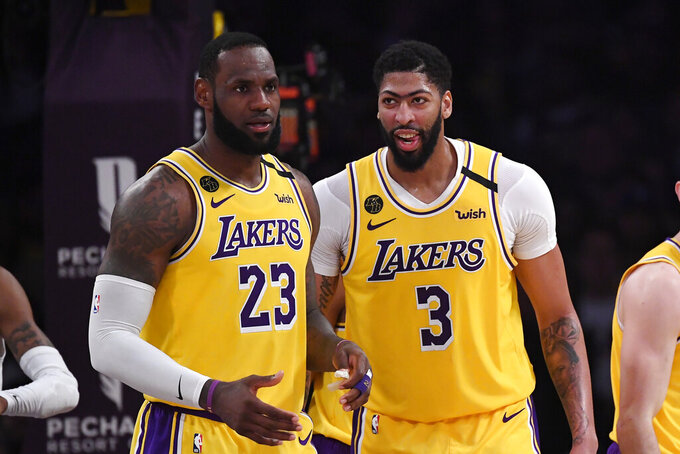 Davis, who left the Los Angeles Lakers’ second scrimmage after getting poked in the eye and didn’t play in the team’s exhibition finale at Walt Disney World, didn’t practice on Tuesday. The All-Star forward is still being listed as day-to-day.

“There is some concern that he could potentially not play Thursday, but we’re hopeful that he does and we’ll see how that plays out,” Lakers coach Frank Vogel said. “He’s going to continue to be evaluated each day.”

The Lakers play the Los Angeles Clippers on Thursday night, when the NBA season resumes with the start of seeding games. The Lakers-Clippers matchup is the second game of a reopening-night doubleheader, preceded by New Orleans facing Utah.

Davis isn’t the only big name waiting for word on his availability.

New Orleans rookie Zion Williamson is back with the team and out of quarantine following an extended absence from the NBA’s bubble to deal with a family matter — but it remains unclear if he’ll see time against the Jazz. He practiced Tuesday and will practice again Wednesday.

LeBron James of the Los Angeles Lakers likes to ice just about everything after practices, and having those bags strapped all over his legs leaves him a bit immobile.

So when he emerged for his session with reporters Tuesday, he immediately realized the chair that was set up for him — akin to a bar stool — wouldn’t work with his icing regimen. He needed something lower to the ground, and a nearby chair that was in the hotel walkway was moved over.

And it didn’t take long to notice that the chair that James — King James, as he’s known — would be occupying sort of looked like, well, a throne.

“Absolutely not,” James said. “It’s one of these hallway chairs that everybody sits in.”

By the time Vogel — who spoke immediately after James — emerged to do his media session, the bar stool was back. The throne was no longer needed.

Miami's Meyers Leonard and Kendrick Nunn have similar aliases that they use on road trips — which led to some confusion when the Heat arrived at the bubble. (Confidentiality on those names was granted, but it can be revealed that they both like the same fictional superhero.)

Leonard got the room intended for Nunn; Nunn didn't even know about the mix-up, since he didn't arrive at Disney until last week because he had the coronavirus.

The room Leonard checked into was fine, except it had a bed for a normal-sized human and not a 7-foot center. By the time Leonard pointed out that his bed was small, he had already set up his computer equipment that he uses for gaming — he often streams himself playing “Call of Duty."

“I wasn't setting it up twice. No way," Leonard said. Nunn got the better view, Leonard claimed — “he got water view, I got parking lot," he said — but the bed got switched out for a bigger one.

The story, however, made it around the inner sanctum of the NBA world. Turns out, Leonard and Nunn had the sort of aliases that are fairly common around the league — and it wasn't the first time that room arrangements got confused because of similar fake names used at check-in.

So why is this necessary?

“When you call for room service and they say, ‘Yes, Mr. (alias withheld),' there's just something about it,” Leonard said.

San Antonio has been rotating assistants as acting head coaches during the three scrimmage games at Disney, and Tuesday was Will Hardy’s turn.

Hardy has been mentioned as a candidate for head coaching jobs in the past, and interviewed for the vacancy with the New York Knicks that ultimately went to Tom Thibodeau.

Spurs coach Gregg Popovich marveled Tuesday at Hardy’s rise from an internship with the team.

“We’ve seen that process a lot over the last 25 years,” Popovich said. “He fits the mold perfectly. He started at the ground and worked his way up ... and here he is. It’s not a surprise. It’s always a process and he’s been brilliant at it.”

“It was great," Hardy said. “We're doing it as a group, as always. ... Obviously, it's a step up from summer league, which has been my experience before this. But I'm just happy that the guys did a good job with the game plan. It takes all of us to get it done."

The Grizzlies were leading the Miami Heat by 23 points in the third quarter on Tuesday in the scrimmage finale for both teams, and Jenkins didn’t like that a foul wasn’t called on a play where the Grizzlies were attacking. So he let referee Marc Davis know his displeasure, and Davis promptly rewarded him with a technical foul.

It was. Didn’t matter. Memphis still beat Miami 128-110 to end its tune-up schedule.

He played in all three of Indiana’s scrimmages at Disney, after initially saying injury concerns would keep him out of the restarted season. Oladipo shot 34% in the three games, averaging 11.3 points and six rebounds.

Pacers coach Nate McMillan said he will meet with all his players individually, Oladipo included, in the coming days.

Oladipo has not indicated if he’s decided yet about playing in the games that count at Disney. Indiana opens its seeding-game schedule, the resumption of the regular season, on Saturday against Philadelphia.

Florida is in the throes of a surge in coronavirus infections, and now tropical weather — always a threat at this time of year — could be the next problem.

The National Hurricane Center is tracking a system that is expected to become a tropical storm. Most of the state of Florida, including the Orlando area, is in what’s commonly called the cone of concern. That means forecasters believe the system will affect those areas in the coming days.

Very early forecasts suggest the system could reach Florida’s mainland this weekend, with strong wind and rain likely. Forecasters — again, with a large margin of error — are saying the worst of the weather would affect the Orlando area on Sunday.

For now, the system is not forecast to become a hurricane. A tropical storm carries winds between 39 and 73 mph. The threshold for hurricane status starts at 74 mph.

There are no games Wednesday, with the six-day scrimmage season ending. The reopening-night twinbill is on tap Thursday night, with both games set to be televised nationally.

And not that any of this matters, but Oklahoma City and New Orleans finished the scrimmages as the only teams with 3-0 records. Washington and Portland went 0-3, and the 18 remaining clubs all went either 2-1 or 1-2.