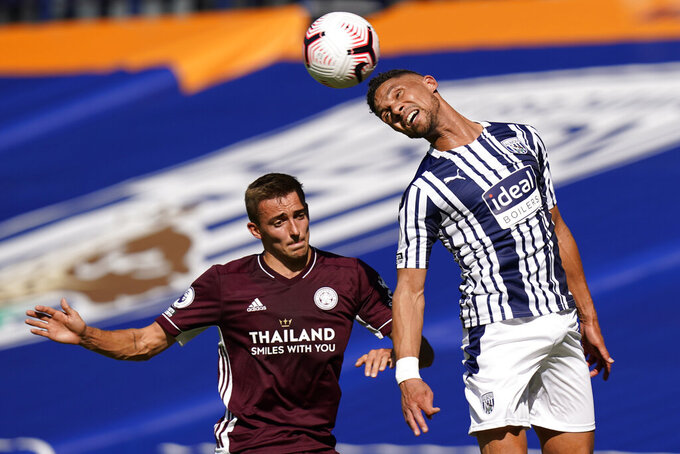 FILE - Leicester's Timothy Castagne, left, and West Bromwich Albion's Kieran Gibbs vie for the ball during the English Premier League soccer match between West Bromwich and Leicester City at the Hawthorns in West Bromwich, England, in this Sunday, Sept. 13, 2020, file photo. The newcomers joining Major League Soccer for the 2021 season lack some of the panache of previous years. In terms of recognizable names, Inter Miami may have landed the biggest by nabbing England left back Kieran Gibbs from West Bromwich Albion. (Tim Keeton/Pool via AP, File)

Prospects: Josef Martinez will work his way back after missing last year with a torn ACL in his left knee. He is unlikely to be 100% at the start of the season, but once he does regain full fitness, he's a proven force. In 2018, the Venezuelan striker was the league's MVP and Golden Boot winner. Santiago Sosa signed with United in February and looks to be an emerging talent. Atlanta won just six games last season and scored only 23 goals, second fewest in the league. The team missed out on the playoffs for the first time since joining the league.

Prospects: The additions of Brazilian forward Brenner and forward Luciano Acosta show Cincinnati is poised to take its next step in Year 3 after finishing in last place in the East for two straight seasons. In 2018, Acosta had his best MLS season with 10 goals and 17 assists. But perhaps the most anticipation surrounds Brenner, a 21-year-old who came from top-tier Sao Paulo, where he scored 21 goals last year. Cincy can use the offensive help. The team had a league-low 12 goals last year.

Prospects: Last season's MLS Cup champions should contend for another title. In addition to the steady contribution of Gyasi Zardes, there's Lucas Zelarayan, who had six goals and four assists in just 16 appearances during the regular season. He added a pair of goals in the 3-0 victory over Seattle in the championship game. Goalkeeper Eloy Room is among the best in the league and had the MLS Save of the Year for his November double save against Orlando City. On top of that, the Crew are looking forward to opening their new stadium in July.

Prospects: United will have a new look under new Argentine coach Hernan Losada, who replaced longtime coach Ben Olsen. Losada, at 38, is the league's youngest head coach. But the team made few other moves. Attacking midfielder Edison Flores was hampered by injuries last season. Meanwhile, Julian Gressel is still looking to revive the form he had with Atlanta. Kevin Paredes was a rookie last season at just 17, and started nine games. The issues at the start of the season will be on defense. Veteran center back Steve Birnbaum and goalkeeper Bill Hamid are both out with injuries.

Prospects: Club de Foot Montreal has rebranded, so no more Impact. Wilfried Nancy has taken over as coach after Thierry Henry's unexpected departure for family reasons at the end of February. Nancy has been an assistant in Montreal since 2016. As one of the league's three Canadian teams, Montreal has relocated to Florida to start the season because of coronavirus-related travel issues. Look for Kenyan Victor Wanyama, who came to Montreal via Tottenham Hotspur, to take on more of a leadership role. Romell Quioto and goalkeeper Clement Diop also provide veteran guidance.

Prospects: Nashville became known for its defense in its first season, with Defender of the Year Walker Zimmerman and veteran midfielder Dax McCarty setting the tone. But the team will have to up its output on offense after scoring just 24 goals last season, 12th in the East. The addition of journeyman CJ Sapong and Uruguayan Rodrigo Pineiro should help address the scoring deficit. Nashville missed out on the MLS is Back tournament last summer because of coronavirus cases, and the team was thwarted again when three preseason games were called off because of COVID-19 concerns in Florida.

Prospects: Perhaps the surprise of last season's playoffs, Bruce Arena's Revs made it to the conference final before they were stopped by eventual champion Columbus. When Spanish midfielder Carles Gil was hampered by injuries last season, New England missed his chemistry with fellow DP Gustavo Bou and Adam Buksa. Iceland's Arnór Traustason is an intriguing addition for Arena, who heads into this third season as the Revolution's coach.

Prospects: Maximiliano Moralez is healthy after being hampered by injuries last season. But NYCFC will have to wait for Heber, who is still rehabbing from a torn ACL. Heber had 15 goals in 2019. While the group skews older, NYCFC is still solid. The late addition of lfredo Morales from Fortuna Dusseldorf adds more depth in the midfield after the departure of Alex Ring. Coach Ronny Deila is starting his second season with the team.

Prospects: With a new forward named Fabio and coach Gerhard Struber looking to shake things up in his first full season, the Red Bulls could be a fun team to watch. Keep an eye on 17-year old midfielder Caden Clark, who scored a goal in his debut last season and is already turning heads in the league. Defender Tom Edwards is on loan from Stoke City. There's been some drama over Kaku, who is playing for a Saudi team. An arbitrator recently said Kaku remains under contract in MLS, but Kaku left New York thinking the club hadn't exercised its option and he was a free agent.

Prospects: Orlando City was something of a surprise last season in coach Pareja's first season in charge. At 34, Brazilian Nani shows no signs of slowing down. The addition of Pato adds more firepower on top. Chris Mueller led the team with 10 goals last season. And there was the emergence of Mauricio Pereyra, who had eight assists. There's still a question about whether Daryl Dike, currently on loan to Barnsley, will be back this season or get snatched up by a European club.

Prospects: Last season's winners of the Supporters Shield were shocked by the New England Revolution in their opening playoff match. Then there was a European exodus: Brendan Aaronson left for Austria and Mark McKenzie headed to Belgium. Anthony Fontana will most likely move into Aaronson's role, while Jakob Glesnes takes over for McKenzie. Sergio Santos is getting better every year. There's a curiosity factor with Aaronson's brother, Paxton. And the Union have MLS Goalkeeper of the Year Andre Blake. Veteran leader Ray Gaddis retired.

Prospects: Chris Armas takes over as coach of the Reds after Greg Vanney went to the LA Galaxy. Vets Michael Bradley and Jozy Altidore remain in Toronto, which has moved for the start of the season to Florida because of travel restrictions between the United States and Canada. The team is largely unchanged from last season, with no big offseason signings. Look for Toronto to try to fill an open DP slot. Midfielder Alejandro Pozuelo, the reigning league MVP, provides the offensive spark with nine goals and 10 assists last season.