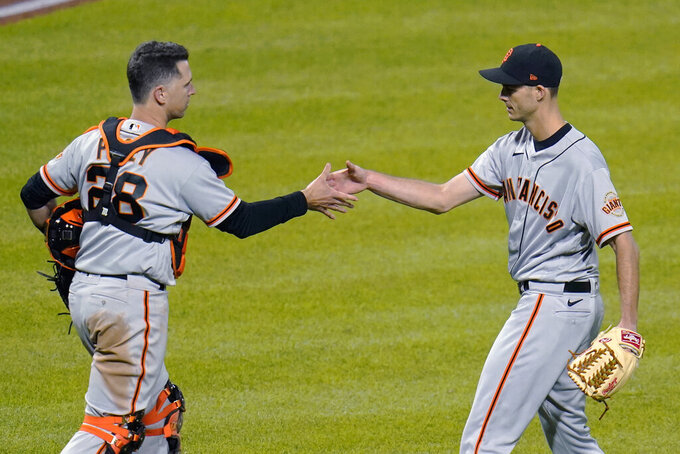 DeSclafani (3-1) struck out five and walked one while improving to 3-7 against the Pirates. The lone hit off him was a first-inning single by Jacob Stallings.

“I thought he did a great job of grinding and fighting his way through five,” San Francisco manager Gabe Kapler said.

The performance came on a night when DeSclafani admittedly did not feel his best.

“Today the body felt super sluggish,” he said. “I completely understand as a pitcher that you’re not going to feel 100% every day. Today was just a grind, trying to make pitches, trying to get outs. I’m just happy I was able to keep the team in the ballgame and all that.”

Duggar’s solo shot to right-center field with one out in the fifth off Wil Crowe (0-2) broke a scoreless tie. It was the center fielder’s seventh career homer in four seasons, and first since June 13, 2019.

“It’s been a while,” Duggar said when asked how long it had been since he hit a ball that hard. “I’ve been trying to find some comfort in the box. I feel like I’ve built a solid foundation and now it’s coming to fruition. It’s a credit to our staff. It just felt nice to get (a home run) and ultimately get the win.”

Duggar and Mauricio Dubon had two hits each for the Giants, who improved to an NL-best 23-14 with their fifth win in six games. Tyler Rogers earned his third save by pitching a scoreless ninth as closer Jake McGee was rested.

Pirates first baseman Will Craig homered for his first major league hit with one out in the eighth off fellow rookie Camilo Doval. Craig’s contract was selected from Triple-A Indianapolis earlier in the day after he went 5 for 6 with three homers in the previous two games.

“It’s one of those things where you make contact and all the weight feels like it’s off your shoulders to get that first home run, that first hit out of the way,” said Craig, the Pirates’ first-round draft pick in 2016.

The Giants added two more runs in the fifth after the home run by Duggar to stretch their lead to 3-0.

Mike Tauchman scored from third base on a low pickoff attempt by Stallings, the catcher. Mike Yastrzemski followed with a run-scoring triple past stumbling right fielder Gregory Polanco.

The Pirates have lost six of eight and were held to four hits.

Crowe allowed three runs and six hits in five innings with five strikeouts and one walk. The rookie is still looking for his first career win after seven starts.

Giants: 1B Brandon Belt (left side tightness) was a late scratch. He has four home runs and 10 RBIs through 10 games in May. … SS Brandon Crawford was unavailable after feeling effects following a COVID-19 vaccination. … LHP Jose Alvarez (left ankle sprain) was placed on the 10-day injured list after being hurt in a weight room accident Tuesday. … OF/1B LaMonte Wade Jr. (left oblique strain) was activated from the 10-day IL and took Belt’s place in the lineup, striking out in all four plate appearances. … 2B Donovan Solano (right calf strain) is expected to begin a rehab assignment with Triple-A Sacramento on Saturday or Sunday.

Pirates: INF/OF Phillip Evans (left hamstring strain) was placed on the 10-day injured list. … RHP Sean Poppen was designated for assignment. … Double-A Altoona RHP Cody Bolton, a top prospect, underwent surgery to repair a torn meniscus in his right knee and will likely miss the remainder of the season.

Giants RHP Kevin Gausman (3-0, 1.97 ERA) faces Pirates rookie RHP Miguel Yajure (0-1, 8.31) on Friday night. Gausman has pitched at least six innings in all seven starts this season. LHP Tyler Anderson was originally scheduled to start for the Pirates, who made the change following Thursday's game but did not provide a reason.