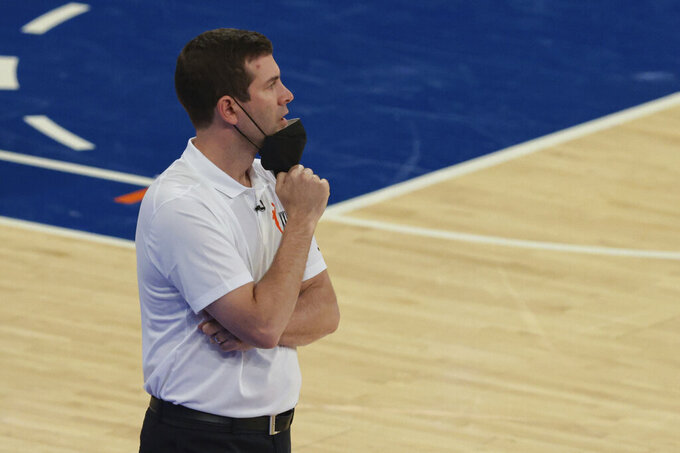 Boston Celtics head coach Brad Stevens reacts during the second half of an NBA basketball game against the New York Knicks in New York, Sunday, May 16, 2021. (Vincent Carchietta/Pool Photo via AP)

BOSTON (AP) — The Eastern Conference play-in tournament game between the No. 7 seed Celtics and No. 8 Wizards is a matchup of teams that ended the regular season on divergent paths.

Washington opened the season 3-12 and was on hiatus for two weeks in January because of coronavirus-related issues before rallying to finish the season 17-6.

Boston ambled to the end of its schedule, following up a season-best, six-game win streak by dropping 10 of its final 15.

Along the way the Celtics dealt with a nine-game absence by trade deadline acquisition Evan Fournier after he contracted COVID-19 and lost Jaylen Brown for the season to a wrist surgery.

Not exactly the encore a team coming off a conference final appearance in last season’s Florida bubble expected.

“Obviously, it’s a place where we didn’t expect ourselves to be, but we’re here. So we’ve got to deal with it and deal with what’s in front of us,” Celtics guard Marcus Smart said. “It’s 0-0. Everybody gets an opportunity to start over. ... We’ve got to go out there and take advantage of it.”

“We fought through so much to get here,” said Westbrook, who was selected as the Eastern Conference Player of the Month on Monday after averaging 26.3 points, 16.1 assists and 13.8 rebounds per game. “Nobody believed that we’d be here. And it’s only up from here.”

While the roads that led here varied, the stakes are simple.

Tuesday’s night’s winner will enter the playoffs as No. 7 seed and get a first-round matchup with second-seeded Brooklyn.

The loser will play the winner of Tuesday’s other play-in pairing between No. 10 Charlotte and No. 9 Indiana for the eighth seed and a first-round matchup with East top seed Philadelphia.

Boston is 2-1 against Wizards this season, but the teams haven’t met since Feb. 28.

It doesn’t change the fact the short-handed Celtics must find a way to contain not only Westbrook, but All-Star Bradley Beal, who's averaged 41 points per game in their three meetings.

Wizards coach Scott Brooks said he believes the end of the regular season has put his team in the right mindset.

“These last X-number of games have been like playoff games,” Brooks said. “That prepares you.”

Washington comes into Tuesday with momentum despite dealing with the coronavirus issues, and assorted injuries which included two starters lost for the season in center Thomas Bryant and first-round draft pick Deni Avdija.

But the Wizards’ stars stepped up when needed. Beal scored 25 points in their 115-110 regular-season finale win over Charlotte on Sunday to lock up the eighth spot in the standings. He was active for the first time after sitting out three games with a strained left hamstring and fought through pain in the victory.

Brooks said it was in line with the toughness Beal’s been displaying in recent seasons, which has gotten a boost from the offseason addition of Westbrook.

“We can’t really point to what started it or how we ended up going on this nice little run, but it clicked at the right time,” Beal said.

But coach Brad Stevens said he remains hopeful all but Williams — a game-time decision — will be available.

One key question for the Wizards is how Beal will feel Tuesday and beyond.

He was out of rhythm at the outset of Sunday’s win and missed his first six shots; he shot 2-for-11 and had five points at halftime. But he helped lead the Wizards to the victory, scoring 20 points after the break.

“I kind of made a hard-headed decision to play. Probably one I shouldn’t have,” Beal said Monday, but added: “I feel good. I’m not as sore as I thought I would be. I’m not as beat-up as I thought.”

Brooks is in the last season of a five-year, $35 million contract and there has been speculation about whether or not he’ll be back.

Westbrook, who also played for Brooks with the Oklahoma City Thunder at the start of his career, made clear that he is a fan.

“Players get a lot of credit, because we’re on the floor. But behind the scenes, Scotty is one helluva coach,” Westbrook said. “If it weren’t for him ... a lot of this stuff wouldn’t even be happening."