Double the challenge at US Women's Open on 2 golf courses 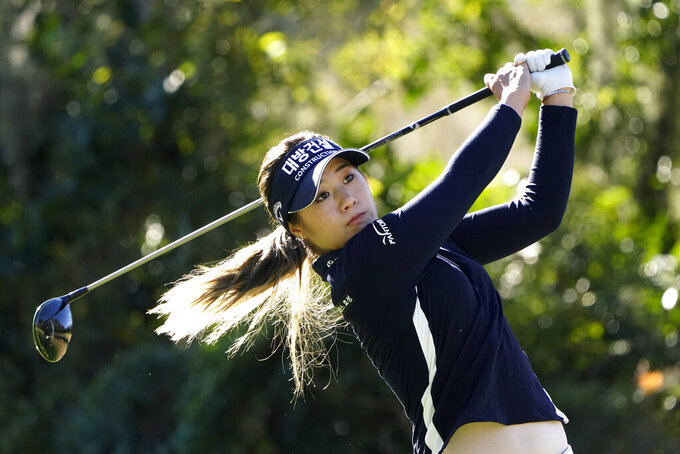 Jeongeun Lee6, of South Korea, watches her tee shot on the third hole during a practice round for the U.S. Women's Open golf tournament, Wednesday, Dec. 9, 2020, in Houston. (AP Photo/Eric Gay)

HOUSTON (AP) — Inbee Park tries to stick to a routine at the U.S. Women's Open to make sure she's not worn out before the tournament begins. A two-time champion, she prefers to play no more than nine holes each of the three practice rounds.

This year didn't allow for that.

The USGA for the first time is using two courses for the first 36 holes, the only way it could keep a full field at Champions Golf Club in a pandemic year that already has eliminated qualifying stages.

For the players, that means getting to know the Jackrabbit and Cypress Creek courses, cramming in as much as they can before Texas native Angela Stanford hits the opening tee shot Thursday.

“U.S. Women's Open golf courses are tough to learn one, but trying to learn two tough courses is definitely a big task for everyone this week,” Park said Wednesday. “It's just a busy three days that we have to spend before the tournament starts.

“I rarely play 18-hole practice rounds before the tournament starts because we play 18 holes Thursday through Sunday, and I usually do nine. But I had to play 18 yesterday. I was going to play 18 twice, but my body was just too tired,” she said. “I decided nine, 18, nine. That will be enough."

These are not complaints. The 156 players at Champions are happy to be playing, no matter how different everything feels, from the two golf courses to the time of the year. Park returned to South Korea for seven weeks and said it felt like the offseason, and now the women have the $5.5 million U.S. Women's Open and the $5 million CME Group Tour Championship in consecutive weeks.

The Women's Open was supposed to be the first week in June until the COVID-19 pandemic shut down the LPGA Tour for more than five months. The best option was two weeks before Christmas, making this the final major of the year.

The USGA came up with an all-exempt field to mirror what it typically would get with qualifying, just as it did for the men's U.S. Open at Winged Foot in September. Given the limited daylight hours, it was fortunate to be at prestigious Champions Golf Club, which was established by Jack Burke Jr. and Jimmy Demaret and previously hosted a Ryder Cup, U.S. Open and the Tour Championship.

Cypress Creek, which will be used for the weekend, is notable for its big greens, the largest Park has seen since St. Andrews. It plays at 6,731 yards for a par 71, a strong test. Jackrabbit is at 6,558 yards with a pair of par 5s longer than 520 yards. It's not exactly a pitch-and-putt.

The timing is big for women's golf, which has rolled out a social media campaign called, “Women Worth Watching.” It's the biggest event on the American golf calendar this week, with network TV coverage on the weekend.

There's a fight for No. 1 between Jin Young Ko and Sei Young Kim, who won the Women's PGA Championship in October at Aronimink while Ko was still home in South Korea riding out the pandemic.

Ko has dreamed of winning the U.S. Women's Open. She won two majors last year during her rise to No. 1 and a sweep of all the big LPGA Tour awards. But this is the major she wants.

Like so many other South Koreans, she has memories of Se Ri Pak winning the Women's Open at Blackwolf Run, the start of South Korean dominance in women's golf. Jeongeun Lee6 won last year at Country Club of Charleston, the eighth time in the last 12 years a South Korean has won what long has been considered the biggest event in women's golf.

“When I was 3 years old, I watched the TV on my father's knee about Se Ri's win in this tournament,” Ko said. “And when I saw that, I wanted to play golf. So I started. So yeah, I want to get the U.S. Open trophy.”

It will be tougher than most, especially with an additional golf course and most of the key players having spent last week at a tournament outside Dallas in cold temperatures.

Alena Sharp arrived in Houston and played 18 holes of each course the first few days.

“It's just trying to remember all the holes to begin with when you get back out there to play the tournament,” Sharp said. “I think it's going to be a mental grind for everybody, so you just have to stay positive and just hit the middle of the greens, honestly. That's what I think the game plan is.”