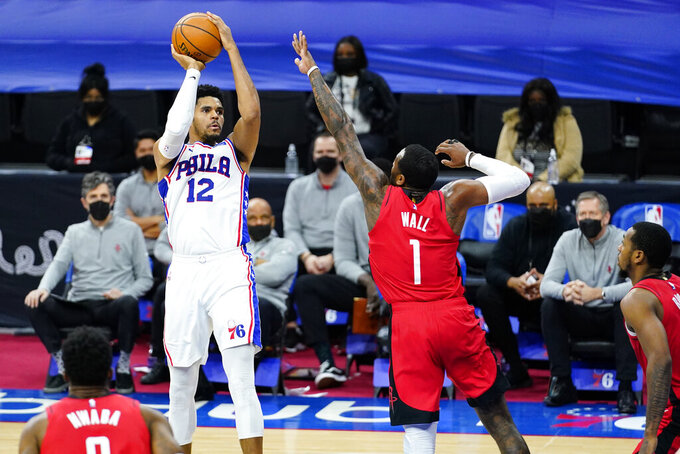 Philadelphia 76ers' Tobias Harris (12) goes up for a shot against Houston Rockets' John Wall (1) during the second half of an NBA basketball game, Wednesday, Feb. 17, 2021, in Philadelphia. (AP Photo/Matt Slocum)

PHILADELPHIA (AP) — Joel Embiid’s back was hurting. Luckily, for the 76ers his game was not.

Embiid had 31 points, 11 rebounds and nine assists and hit a key jumper late to help Philadelphia beat the Houston Rockets 118-113 on Wednesday night.

Seth Curry scored 25 points and Tobias Harris added 24 for the Eastern Conference-leading 76ers, who snapped a three-game losing streak. Ben Simmons (illness) didn’t play for the 76ers a game after scoring a career-high 42 points and adding nine rebounds and 12 assists.

Embiid returned to the lineup after sitting out Monday’s 134-123 loss at Utah due to back stiffness. The 76ers’ big man looked sluggish at times in the first half and grabbed at his back after getting his shot blocked by Cousins with 47.8 seconds left in the first half.

“The whole game it was pretty tight,” he said.

It looked like Philadelphia’s star big man might be able to rest his aching back in the second half. The 76ers led by 29 points and looked on their way to an easy victory when Tyrese Maxey’s two free throws made it 100-82 with 10:07 to play. But Philadelphia relaxed enough to let Houston slowly back into the contest.

Gordon’s 3-pointer with 3:54 remaining cut the margin under double-digits for the first time since early in the second quarter, pulling the Rockets within 108-99. Then, Wall scored eight straight points for the Rockets, the last two on a pair of free throws with 1:28 left, to make it 110-107. Embiid answered with a baseline, 12-foot jump shot and the 76ers made enough free throws in the final minute to hold on.

Embiid had 23 points after halftime.

“Obviously, things changed and I had to adjust to it,” Embiid said. “I just wanted to make sure that we got the win.”

Before entering Philadelphia’s locker room, Embiid sat on a chair, stretched and grimaced. He looked more spry at the start of the second half, scoring early with a pair of layups and a short jumper. And he looked fine when Philadelphia needed him the most in crunch time.

Houston coach Stephen Silas was as happy with the second-half comeback as he was disappointed with the first-half performance.

“I told them the way we were playing in the first half was unacceptable, unfair to themselves, unfair to everybody and they had a decision to make as far as our professionalism, our overall lackadaisical play,” he said. “Incredibly disappointing in the first half, walking around, not defending, not doing the things we should do. I challenged them to be better and they were.”

“You cannot say that word,” Rivers jokingly told a reporter when asked if Simmons’ absence had to do with the virus.

Rockets: Silas said the Rockets were planning to fly home after the game but were keeping an eye on the weather situation in Houston following a winter storm that left much of the city without power or heat. ... Tucker (bruised left quad) missed his second straight contest. The veteran forward ended his 267-game ironman streak when he missed Monday’s 131-119 loss at Washington. ... Oladipo (right foot) sat for the third consecutive game. Wood (sprained right ankle) has missed seven straight.

76ers: Shake Milton (ankle) missed his fourth straight game. Milton went through a healthy workout in the pregame. ... Improved to 12-2 at home.