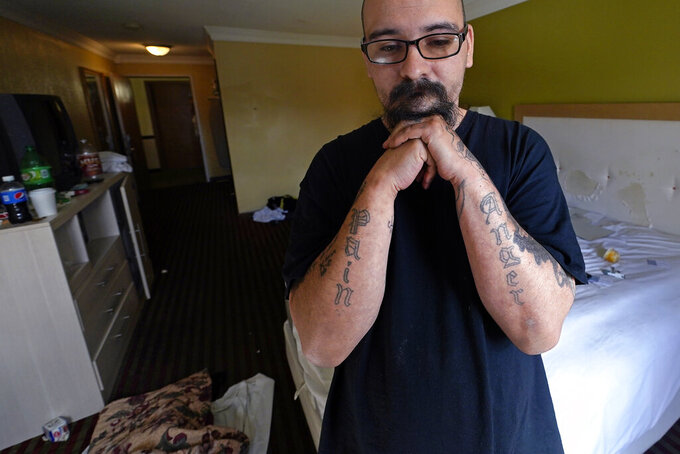 David Moran poses in his hotel room, paid for by a pandemic voucher program, at the Hilltop Inn in Berlin, Vt., Wednesday, June 16, 2021. Tens of thousands of homeless like Moran, who now has a job at Applebee’s, have been staying in hotels across the U.S. paid for by federal programs aimed at preventing the spread of COVID-19. “I’m not going to be able to get a shower on a regular basis, which around food is not a good thing,” he said. “So I think there should be more available funds for people that are really trying.” (AP Photo/Charles Krupa)

FORT LAUDERDALE, Fla. (AP) — Everyone on the streets knows “Sir Charles," the skinny guy with the saxophone, sunglasses, felt hat and megawatt smile. At a gig this week at the iconic Elbo Room beach bar, he danced with a soda in his hand as the bouncers teased him, the ladies applauded and patrons slipped a few dollars into his tip jar.

But after the magic of a street musician's nightlife wore off, the 63-year-old returned to a seedy Fort Lauderdale motel, laid his head on a pillow and wondered how many nights he had left with a roof over his head.

Charles Adams has spent the last three months living at a motel paid for with federal money aimed at preventing the spread of COVID-19 by taking homeless residents off the streets. But as hotels reopen to tourists and funding wanes, tens of thousands of homeless nationwide are being forced from the motels.

Several cities like New Orleans ended their programs months ago amid financing shortages. Experts warn there aren't enough shelter beds, which means sending many back on the streets. In one Vermont community, social workers are offering camping equipment to some homeless people no longer eligible to stay at motels come month's end.

Cities drew from various federal pots to fund the homeless hotels. The Federal Emergency Management Agency extended its funding through September, but the approval process is so arduous that many jurisdictions are not taking advantage of it.

The crunch comes as millions across the country face uncertainty over the end of a federal freeze on most evictions on July 31. The ban kept many people from being turned onto the streets during the pandemic, yet it also artificially kept many units off the market meaning less long-term housing for those already homeless.

City officials and advocacy groups are working to secure housing for the homeless leaving hotels, but it’s challenging. Big cities like Los Angeles and San Francisco, which put up at least 10,000 and 2,000 people respectively, face staffing shortages to help with logistics like securing the required ID documents and background checks, said Samantha Batko, senior researcher at the Urban Institute.

Additional federal resources are coming, including tens of billions of dollars from the Department of Housing and Urban Development, but it takes time to set up new programs. Experts warn there will be a lag.

“Those programs are in the process of being rolled out now, and all of those resources are not in hand in communities,” Batko said.

At the Fort Lauderdale motel, Adams gets free lunches and dinners, clean linens and doesn't have to hunt for a place to shower before a gig. A caseworker at the motel, which the city requested not be named because it's now open for tourists, works on scheduling mental health appointments and other social services.

Fort Lauderdale housed roughly 130 people in motels last summer until it shuttered the program amid funding shortages. Tents quickly sprang up, and the city restarted the program in April, spending $1.2 million overall.

Adams is one of roughly 50 homeless people still at the Fort Lauderdale motel. He was on the street for a year before that.

The motel program was supposed to end a few weeks ago, "but we don’t want to put people back on the street," said city spokeswoman Ashley Doussard. “We’re having a really difficult time finding places for them to go.”

Families were prioritized first. That left single men like Adams. His caseworker told him he may have to go to a shelter in a couple weeks.

Gazing at his polished saxophone in its case, Adams shook his head.

“I don’t like it, the filthiness, thieves, drug dealers, drug addicts,” he said of shelters. “I can’t be around people like that.”

The shades were still on, as always, but in a rare moment the cool cat admitted he's worried: “I don't have any other place to go.”

It's a stressful picture unfolding in cities nationwide for many homeless Americans who found themselves with a stable address, often for the first time in years, during COVID-19.

New York City is moving roughly 9,000 homeless people out of hotels and back into traditional shelters now that hotels are filling with tourists.

Placing the homeless in hotels is far more expensive than congregant housing and was always a stopgap. Some states used federal pandemic money to buy hotels to use as shelters or convert into more permanent housing. California and Oregon have already acquired some and King County, Washington, is doing the same.

New Orleans housed 618 homeless people in hotels during the pandemic in a program financed by the city and state, but it ended in November amid struggles with reimbursement funding.

About 75% were placed in permanent housing, some went to emergency shelters and 87 returned to the street, joining a growing number of homeless caused by the pandemic, said Martha Kegel, executive director of the nonprofit UNITY of Greater New Orleans. The latest count from January showed nearly 500 people living on the streets of The Big Easy.

In Berlin, Vermont, David Moran will have to leave his temporary home Wednesday at the Hilltop Inn. It's been a convenient spot next to his job at an Applebee’s restaurant, and he wishes the voucher program would be extended.

“I’m not going to be able to get a shower on a regular basis, which around food is not a good thing," he said. “I think there should be more available funds for people that are really trying.”

Ivy LeGrand and her boyfriend camped outdoors before getting a room at the motel. Now the 35-year-old says they may have no choice but to again live in a tent.

Vermont spent $79 million on hotel vouchers, housing up to 2,000 households on some nights, but the program was not financially sustainable. The state has extended it 84 days for families with children, the disabled and other vulnerable, and is giving $2,500 checks to those no longer eligible. It's also investing $120 million to expand shelter beds and find more permanent housing.

The past year in the motel was a blessing, said LeGrand, who struggles with mental health and substance abuse issues. She and her boyfriend are considering using their checks from the state to invest in a camper.

“Being here I felt like it softened me up, you know,” she said of the motel. “I haven’t had to survive outside, and it’s just not easy, you know. It’s hell to be honest.”