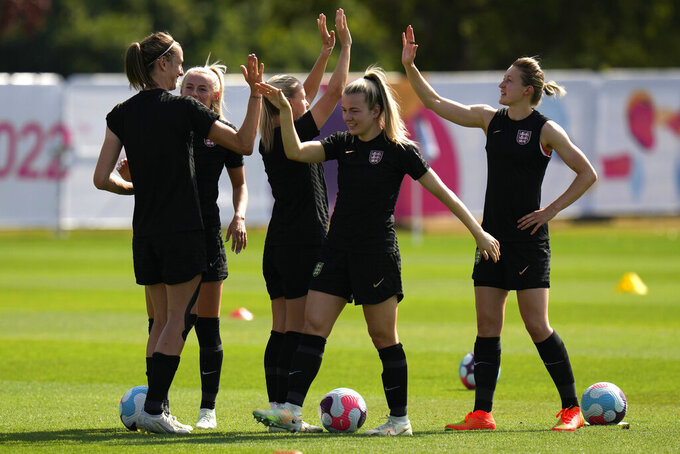 LONDON (AP) — The record numbers of fans at the Women's European Championship have been treated to a star showing from host side England, even as they've had to contend with a record-breaking heatwave.

The rest day Tuesday between the end of the group stage and England playing Spain in the first of the quarterfinals fortunately coincided with the worst of the heat, set to hit a never-before-seen 40 degrees (104 F). That has brought health warnings, as well as widespread disruption to trains and flights.

The last games of the group stage introduced cooling breaks midway through each half, a measure rarely needed for games in northern Europe.

The host team has a good shot of winning its first major women's soccer tournament, a status underlined by its 8-0 demolition of Norway.

England had the best record of any team in the group stage — maximum points, 14 goals scored and none conceded — and Beth Mead is the tournament scoring leader with five goals and three assists.

After opening with a tense 1-0 win over Austria, England was sharp and aggressive from the start to overwhelm a Norway containing two of the world's top forwards in Ada Hegerberg and Caroline Graham Hansen. After coach Sarina Wiegman was sidelined with a positive coronavirus test, England beat Northern Ireland 5-0.

The buzz around England has been a factor in the tournament posting record crowd numbers, including 68,871 for the opening game at Old Trafford.

Wiegman has been addressing her players by video link as she hopes to recover from COVID-19 in time to be back on the sidelines for England's quarterfinal on Wednesday against a Spain team with its own key absentee.

Ballon d'Or winner Alexia Putellas tore a knee ligament the day before the tournament began and was ruled out. She's one of a number of star players sidelined by injury or illness.

Forward Vivianne Miedema, who averages nearly a goal a game for the Netherlands and was a key part of the championship-winning team in 2017, has missed the last two Dutch games with COVID-19.

The Netherlands made hard work of beating Portugal and Switzerland without Miedema and qualified to play France in a highly anticipated quarterfinal on Saturday. Backup goalkeeper Daphne van Domselaar impressed after first-choice Sari van Veenendaal suffered a tournament-ending shoulder injury in the opening game.

The Dutch team on Tuesday lost another player — Lieke Martens. She was ruled out for the rest of the tournament after picking up a foot injury against Switzerland.

Around half of the 16 teams at the championship have had virus cases. Germany coach Martina Voss-Tecklenburg in particular has been fiercely critical of UEFA's refusal to expand squads from 23 to 26 players to deal with virus cases, as it did for the men's European Championship last year.

Germany was once the undisputed superpower of women's soccer in Europe, winning eight of nine European Championships from 1989 through 2013.

Since its last major title at the 2016 Olympics, however, Germany has not got past the quarterfinals of any tournament and its best clubs have been outgunned financially by the rising powers in England and Spain.

Euro 2022 could mark a German revival. Voss-Tecklenburg's team beat Denmark, Spain and Finland in the group stage without conceding a single goal. Next up on Thursday is a quarterfinal with a defense-first Austria which qualified with a narrow win over Norway.