Every year could soon have World Cup on Infantino's travels 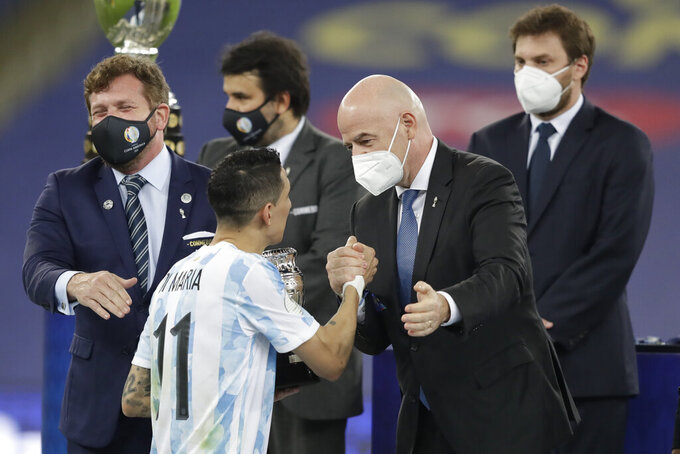 There was the Copa America final on July 10 followed by an overnight flight on a Qatari-owned private jet from Rio de Janeiro to London to see the European champion crowned.

Having already started July in Miami for the CONCACAF congress, he was back in the U.S. to see the American men beat Mexico in the Gold Cup final in Las Vegas on Sunday.

Now he’s in Tokyo to see the Olympic medal matches.

All that’s missing in this congested summer of soccer traveling for Infantino is a major tournament with FIFA’s name on it. How about a World Cup every year? Infantino's already on the case — talking up the sporting case for men’s and women’s World Cups becoming biennial rather than quadrennial tournaments.

“You don’t need to be an Einstein,” Infantino said after a recent FIFA Congress, “to know that if you have two World Cups in four years you will double the revenues."

FIFA went on to say “this will not happen" but it was unclear what Infantino was referring to in May about the commercial prospects of more regular World Cups. The men’s and women’s tournaments could be played in alternating years if this plan was adopted.

Saudi Arabia's national federation was the one to nominally ask at the congress in May for FIFA to explore World Cups being staged every two years.

The South American confederation, CONMEBOL, and France had also promoted the idea.

FIFA has launched a feasibility study, although it isn't going into details.

The sport's governing body has declined interview requests over the last year with Infantino to discuss his vision for an overhaul of international football after 2024. It is being conducted with his chief of global football development, Arsene Wenger, the former Arsenal manager.

Saudi Arabian Football Federation president Yasser Al Misehal, in Tokyo for the Olympics, told The Associated Press he wouldn't comment on the World Cup proposal, or the prospect of his country launching a bid for the 2030 tournament.

Players at the Olympic tournament had varying opinions on the idea.

Saudi captain Salman Al-Faraj was more willing to talk up the idea. Al-Faraj was part of the Saudi team that qualified for the 2018 World Cup — its first in 12 years — and was eliminated in the group stage.

“It would give an opportunity to many more players to participate,” he said. “At the moment because it is held every four years some players may never get the chance to play in the World Cup.”

And that’s why it could win support if taken to a vote of FIFA's 211 members. The decision has already been made to expand the men’s World Cup from 32 to 48 teams from 2026.

For others, though, it's the relative rarity of World Cups that makes the event special.

“The World Cup has always been every four years,” Spain forward Dani Olmo said. "So this is the essence of football.”

Olmo has reached the Olympic final having come straight from Spain's run to the European Championship semifinals. That’s on top of a full season in Germany with Leipzig interspersed with trips on international duty.

Higher frequency of the global showpiece would increase player workloads, especially when there are still continental tournaments like the European Championship to fit in, which Wenger believes should also be every two years.

But there are even reservations in Egypt which, despite being the record seven-time African champion, has only played at three of the 21 editions of the World Cup.

“So many teams would not benefit from this (idea),” said defender Ahmed Hegazi, who played for Egypt at the 2018 World Cup and at the Olympics. “It would actually be counterproductive because they play too many games and there is no time to rest.

“It might be entertainment for people. It might be a pleasure to watch all these games and it might also give the chance for other teams that don’t usually qualify for the World Cup to get the chance to play. But it would be less enjoyable.”

There would be more support in the women’s game to play World Cups more often, with a desire among leading nations to play each other more often as they try to grow the audience.

The Women’s World Cup will expand from 24 to 32 teams when it is co-hosted by Australia and New Zealand in 2023.

“We as footballers want to play as much football as possible,” Australia striker Kyah Simon said this week. “So if it’s a matter of changing how often that tournament’s played, I’m 30 at the moment so if I can squeeze in another two World Cups, that would be nice for me.”