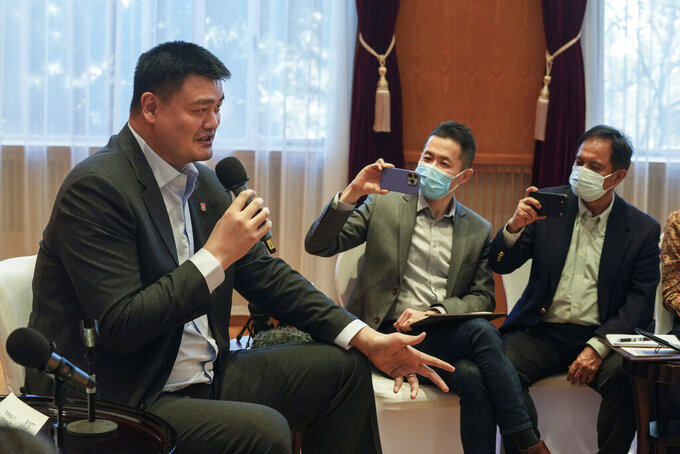 Reporters use smartphones to film Yao Ming, head of the Chinese Basketball Association and Ice Snow Sports Promotion Ambassador, left, as he speaks during a Linjia 7 Salon afternoon tea with journalists at Beijing International Club in Beijing, Monday, Jan. 17, 2022. Former NBA great Yao Ming said Monday he and others had a pleasant talk when they met last month with Chinese tennis player Peng Shuai, whose disappearance after making a sexual assault allegation against a former government official raised international concern. (AP Photo/Andy Wong)

BEIJING (AP) — Former NBA great Yao Ming said Monday he and others had a pleasant talk when they met last month with Chinese tennis player Peng Shuai, whose disappearance after making a sexual assault allegation against a former government official raised international concern.

He also said it is unfortunate that Novak Djokovic won't play at the Australian Open because of his COVID-19 vaccination status. But Yao added that he isn’t qualified to judge Australia's pandemic policies.

Yao, who played for the Houston Rockets from 2002-11 and is now president of the Chinese Basketball Association, used stories and humor to deflect challenging questions at a news conference to promote the Beijing Winter Olympics, which open in 18 days.

Asked about China's relations with the U.S., which has announced a diplomatic boycott of the Beijing Games, Yao likened sporting and cultural events to the community temple gatherings he went to as a child in Shanghai.

“On that occasion, even with the neighbors I had bickered with, I would nod my head (in greeting)," he said. "Then we went on with whatever we needed to do. I think we need more of this kind of temple gathering.”

He also called sports a bridge for communication, saying there are sometimes collisions on bridges, but "we hope we can keep the bridge.”

Peng, who won Grand Slam titles in women's doubles, denied making the assault allegation to a Singapore newspaper on the same day photos of her with Yao and two former Olympians were posted on social media. The photos appeared to be part of a campaign to respond to international demands that Peng be allowed to talk freely about her situation.

Yao said that he has known Peng for about 20 years. The four Chinese sports figures were photographed on an observation deck from where they watched a winter sports exhibition.

“We had a pleasant chat,” he said. "We asked many questions about the game as we were not familiar with snow sports.”

At one point, it was unclear if he said Peng was OK. Some, including the translator for the news conference, heard her say “she was fine that day," but others thought Yao said “we were all fine that day.”

The International Olympic Committee, which has been pressured to move the Games from China because of human rights concerns, came under further fire after IOC President Thomas Bach held a video call with Peng. An IOC statement said that she assured Bach and others that she was well.

Regarding Djokovic, Yao said he is not familiar with Australia’s pandemic measures, "so I’m not in a position to comment if he did right or wrong.”

But, he said, “speaking as a former athlete, I think it’s a pity for a player to lose such an opportunity and for the spectators to lose an opportunity to enjoy watching the player's skills.”

The former Rockets center also said he wants to invite Boston Celtics center Enes Kanter Freedom, who has argued for a boycott of the Beijing Olympics, to visit China to develop a deeper understanding of the country. He said he couldn’t comment on Freedom’s position, but that “everyone receives information from different channels and it may lead to different points of view.”

Yao, who is 41, said society should embrace technology because it brings more convenience and promotes communication. But he started his answer by saying, “If you allow me to choose, I would rather go back to 10 years ago without these high technologies so I can move more freely."