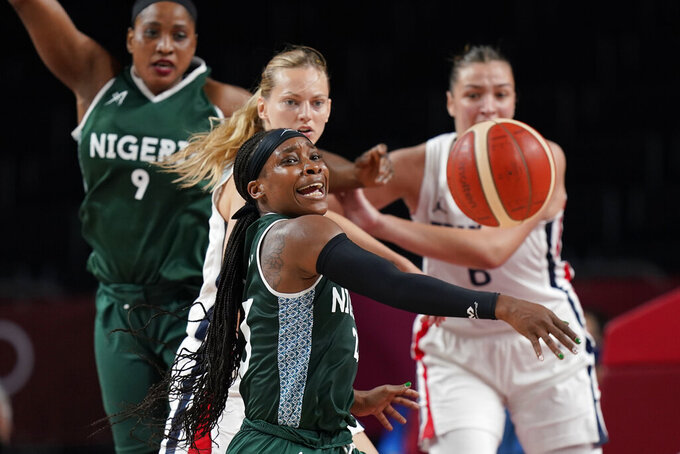 Nigeria's Ezinne Kalu, center, loses control of the ball as she is fouled by France's Marine Johannes during a women's basketball game at the 2020 Summer Olympics, Friday, July 30, 2021, in Saitama, Japan. (AP Photo/Eric Gay) 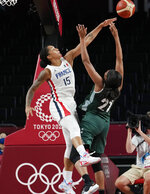 France was up six points after one and led by three early in the second quarter before blowing the game open with a 22-8 burst to close the half. Williams had six points and Duchet added five during the spurt that gave France a 44-27 halftime advantage.

Nigeria (0-2), which was coming off an eye-opening nine-point loss to the U.S. in its opener, could not close the gap in the second half. Nigeria was attempting to become the first African nation to win an Olympic contest in women’s basketball since 2004 when the team went 1-5 in Greece. No team from the continent has won a game since. There last chance will come on Monday against host Japan.

Coach Otis Hughley Jr. had his assistants back on the bench for this game. Ruthie Bolton and two other assistants missed the team's first game because of Olympic credentialing issue.

France closes out pool play against the U.S. on Monday.