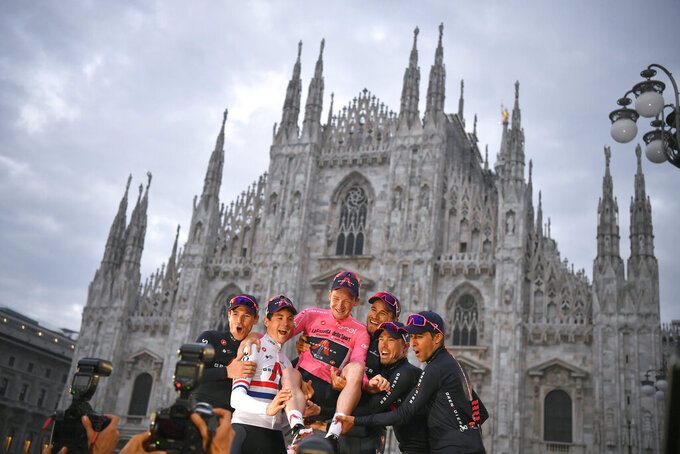 Britain’s Tao Geoghegan Hart is backdropped by the gothic cathedral as he celebrates with teammates after winning the Giro d'Italia cycling race, in Milan, Italy, Sunday, Oct. 25, 2020. In one of the most exciting final stages of a Grand Tour, British rider Tao Geoghegan Hart won the Giro d’Italia on Sunday, edging out Australian Jai Hindley by just 39 seconds. (Marco Alpozzi/LaPresse via AP)

Geoghegan Hart edged Australian Jai Hindley by just 39 seconds in one of the most exciting final stages of a Grand Tour.

As well as the Maglia Rosa (pink jersey), Geoghegan Hart also beat Hindley to the white jersey that goes to the best young rider who is 25 or under. It was the first time since the 1994 Giro that the winner and runner-up in a Grand Tour were both eligible for the U25 classification.

Wilco Kelderman was third overall — 1:29 behind Geoghegan Hart — at the end of the three-week race, which appears to have finished just in time with rising numbers of coronavirus cases in Italy and new restrictions announced in the country.

“Not in my wildest dreams did I imagine this would be possible when we started out in Sicily almost a month ago,” Geoghegan Hart said. “All my career I’ve dreamt of trying to be Top 10, Top 5 maybe, in a race of this stature, so this is something completely and utterly different to that and I think it’s going to take a long time for this to sink in.”

Geoghegan Hart is 25 years old, a year older than Hindley. Portuguese rider João Almeida, who wore the Maglia Rosa for most of the Giro, is 22 — the same age as Tour de France winner Tadej Pogačar.

“I think there’s always a new generation coming, that’s the name of the game,” Geoghegan Hart said. “There’s a lot of super talented young guys, cycling is changing a little bit with advances in technology and availability of information to younger and younger riders

“I’m just super happy to be here and congratulations to Jai for a super race.”

Geoghegan Hart was supposed to be in Italy as support for Geraint Thomas but was thrust into a leadership role at Ineos Grenadiers after Thomas crashed and broke his pelvis in Stage 3.

Neither Geoghegan Hart nor Hindley had ever finished higher than 20th in a Grand Tour but the pair entered the final day at the top of the standings and tied on time -- a first in Grand Tour history.

Geoghegan Hart proved to be quicker than Hindley in a tense individual time trial in Milan and that was all that separated the pair after nearly 3,500 kilometers (2,175 miles) of racing.

“What can I say, I'm pretty disappointed but at the same time it’s still a massive accomplishment for me to be on the podium here in Milan,” said Hindley, who rides for Team Sunweb. "I’m super proud.

“I knew before the start it would be hard to beat him in the time trial ... I gave everything I had and that’s all I could do. I don’t have any regrets.”

Geoghegan Hart's Ineos teammate Filippo Ganna was fastest on Sunday, with a time of 17 minutes, 16 seconds on the mostly flat 15.7-kilometer (10-mile) route, which finished next to Milan’s iconic cathedral.

“Congratulations to Tao ... I'm more emotional than he is,” Ganna said as he smiled through tears of joy for his teammate.

Ganna was heavily favored to win the final stage after the Italian dominated the two previous time trials in this year’s Giro. Ganna was 32 seconds faster than Victor Campenaerts and Rohan Dennis for his fourth win in 21 stages and Ineos' seventh at this year's Giro.

The Giro was rescheduled from its usual May slot because of the coronavirus pandemic. Race director Mauro Vegni said from the start that the race’s greatest achievement would be reaching the finish in Milan.

The Lombardy region, of which Milan is the capital, introduced a nightly curfew last week because of a rising number of COVID-19 cases in an area already hard hit during the first wave of infections earlier this year.

There was rigorous testing at the Giro and overall contenders Simon Yates and Steven Kruijswijk had to withdraw from the race after testing positive. Yates’ Mitchelton-Scott team and Kruijswijk’s Jumbo-Visma team subsequently withdrew their entire squads following a series of positive results from the first rest day.