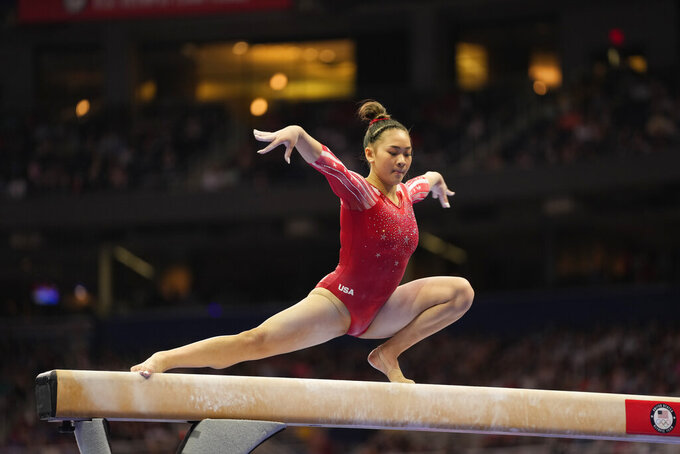 Sunisa Lee competes on the beam during the women's U.S. Olympic Gymnastics Trials Sunday, June 27, 2021, in St. Louis. For decades, high-profile college-bound Olympians were forced to make a choice: turn pro to cash in on their notoriety or remain an amateur to go to school. That's no longer an issue for athletes like gymnasts Sunisa Lee and Jordan Chiles after legislation cleared the way for them to profit off their Name, Image and Likeness. (AP Photo/Jeff Roberson)

Maggie Nichols just laughs when asked if she plans on asking Under Armour where her check is.

Nichols is kidding. Well, mostly. She didn't complain when the athletic apparel giant approached her in 2016 about appearing in an ad that also featured Madison Kocian and MyKayla Skinner.

Despite being high-profile elite gymnasts with world championship gold medals on their resumes, they were amateurs at the time the spot was filmed. Taking money would have technically made them professionals and jeopardized the college scholarships that awaited them once the 2016 Olympic cycle was complete.

So they hung out. They were treated like movie stars for a few days. And they didn't receive a dime. It was good exposure. It was good fun. Looking back, though, Nichols isn't sure that it was a good call.

“It’s upsetting because there was a lot of money involved,” she said. “We made sure it was OK with NCAA. We were told we could do it if we were not paid, if we didn’t receive any clothing.”

So they didn't. And while the 23-year-old has zero regrets about her decision to go to school after not being selected for the 2016 U.S. Olympic team, the NCAA's decision this week to allow college athletes to profit off their name, image and likeness left her shaking her head a bit.

“Me and Madison were kind of talking earlier (this week) how we wished that would have been passed earlier, kind of thinking the what-ifs, the opportunities we had to pass down because of the rules," said Nichols, who retired from gymnastics a year ago and is now in graduate school at Oklahoma. "It does kind of stink that it did get passed and we missed out in it.”

Nichols' experience symbolized the decadeslong push-pull for high-level teenage athletes in Olympic sports, particularly in women's gymnastics, where many (but certainly not all) elite careers peak before their 20th birthday. The NCAA allows Olympians to collect bonuses from the USOPC for winning medals while maintaining college eligibility, but the vast majority of earning opportunities for world-class American gymnasts don't come on the competition floor but through endorsements.

“I don’t think we should ever be in a position where a student-athlete is choosing to go to college and give up what they have earned the right to earn in that way,” Lyke said.

While it's a no-brainer for the likes of reigning Olympic champion Simone Biles — who verbally committed to UCLA before opting to turn pro in 2015 around the time she captured her third world title — for Nichols and many others who don't reach the crossover appeal status Biles has achieved, it would have been a calculated risk.

Nichols and her family even did a cost analysis, setting a certain earnings threshold she would have to cross to make sacrificing her scholarship worth it. Ultimately, Nichols opted to remain an amateur. It was the right call at the time, one that recently named Olympians Sunisa Lee, Jordan Chiles, Jade Carey and Grace McCallum won't have to make.

Lee, 18, who finished second to Biles at the U.S. Olympic trials, remains committed to Auburn. That hasn't stopped Lee and her family from having conversations about what might await if she returns from Japan with a fistful of medals stashed in her luggage.

The Lees are hardly the only ones having those discussions. It's one of the reasons agent Sheryl Shade's phone began to ring the second the new legislation went into effect. Shade, whose client list includes two-time Olympic medal-winning gymnast Laurie Hernandez, is busy attempting to sift through the details. No easy task considering there is no uniform rule and what is legal and what is not varies from state to state.

Shade believes “there is no ceiling” on earning potential for college-bound American Olympians, particularly in women's gymnastics, where TV ratings for the NCAA championships have spiked. They don't even have to become an Olympian to reach a massive audience. LSU gymnast Olivia Dunne, for example, has over a million followers on Instagram.

Trending on TikTok is one thing. Standing atop the podium with a medal around one's neck while the national anthem plays in front of tens of millions of Americans is quite another. It's why Shade isn't sure the pro vs. college debate is dead.

The athletes, however, aren't the only ones who will have to adjust. The UCLA women's gymnastics program is among the most high profile in the country. The team roster is filled with former Olympians like Kocian and Kyla Ross, and elites like Margzetta Frazier and Katelyn Ohashi, who have found happiness and an ardent social media following while competing for the Bruins.

Having at least one — or in some cases, more than one — Bruins' floor routine go viral has become an annual rite of the start of the NCAA competition season. UCLA coach Chris Waller knows his athletes will be inundated with offers. Expect some trial and error along the way.

“There's going to be a huge learning curve, and I think that what we know for many collegiate athletes, by the time they graduate college, they’re going to be entrepreneurs,” Waller said.

One of Waller's incoming athletes already is.

Chiles, the 20-year-old whose elite career appeared to be on its last legs before she moved to Texas in 2019 to train alongside Biles, already has her own clothing line. Scan the website and you'll see Chiles' sisters modeling hoodies and sweatshirts.

The new NIL rules mean at some point you may see Chiles rocking her own gear. She couldn't before due to the complex NCAA rules, rules that said it was OK for student-athletes to create their product so long as they didn't use their face to help sell it.

Those days are gone. Not just for Chiles. But for every other teenage Olympic hopeful, too. A month ago at national championships, the concourse at Dickie's Arena in Fort Worth, Texas, included a poster that featured Chiles wearing GK Elite leotards. She wasn't allowed to ask for compensation at the time. She is now, which will not be a deal-breaker for GK Elite chief commercial officer Matt Cowan, who stressed the company is intent on helping “empower athletes.”

GK is hardly the only one. Nichols spent years being forced to say no when approached by brands during her competitive career. Now, she finally gets to say yes.

“I spent a lot of time deciding whether I should go pro or go to college,” Nichols said. “I look back now, it would have been awesome if I could have done both.”