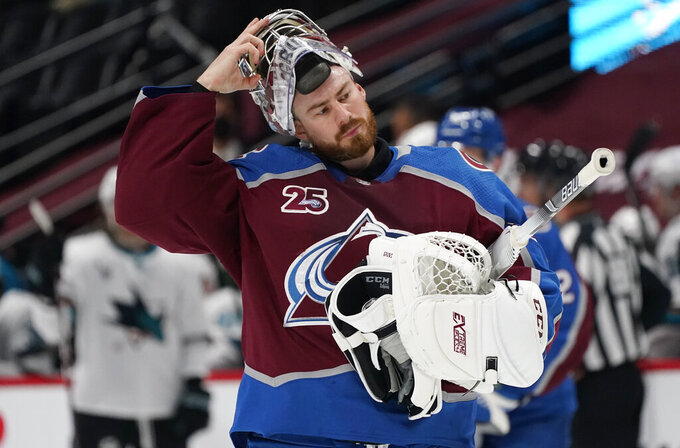 Colorado Avalanche goaltender Philipp Grubauer adjusts his mask as he heads back to the net during a timeout against the San Jose Sharks in the first period of an NHL hockey game Friday, April 30, 2021, in Denver. (AP Photo/David Zalubowski)

Grubauer showed few signs of rust in his first game since April 12. It was his sixth shutout of the season.

“It felt like it's been a long time since I played,” Grubauer said. “It was a tough one in the first (period) for me, got better in the second and the third one I felt back to 100%.”

Mikko Rantanen added two assists and an empty-net goal for the Avalanche, who ended a three-game slide. Rantanen and Joonas Donskoi, who also had an assist, both were returning from the virus protocol list.

The serenade of “Gruuu-bi” by the sparse crowd only grew louder as the game wore on. Grubauer has a career-best 26 wins this season.

“He’s the backbone of our team and he played incredible for us tonight,” Makar said.

Grubauer went on the virus protocol list on April 14 and the team had a pause two days later with Donskoi also joining Grubauer on the list. Rantanen was added when the Avalanche were shut down.

The Sharks thought they had a goal from Tomas Hertl on a power play midway through the third period to make it 2-1. But the goal was nullified after the Avalanche won a challenge that the play was offsides.

“The offsides was unfortunate,” Sharks coach Bob Boughner said. “I don’t think we got outplayed badly or anything like that. We just couldn’t find the goal we needed.”

Nathan MacKinnon was held in check on the offensive end as his 15-game point streak was snapped. His biggest contribution was sticking up for teammate Samuel Girard, who was knocked into the boards by Kevin Labanc in the third. MacKinnon exchanged punches with Labanc before both were separated and assessed penalties for fighting.

“MacKinnon thought I took liberty on his guy and he just came in and stuck up for his teammate," Labanc said. "I have a lot of respect for that.”

Girard gingerly skated off and slammed his stick against the boards before exiting. Coach Jared Bednar had no update on Girard. Bednar understood why MacKinnon dropped the gloves.

MacKinnon didn’t register a shot on net. It ended his franchise-record streak of 263 consecutive regular-season games with at least one shot.

Makar finished with a goal and an assist to give him 37 points (six goals, 31 assists) in 36 games this season. He entered the game as the only NHL defenseman to average a point-per-game this season.

San Jose struggled on four power-play chances and is now 0 for 28 spanning its last 10 games.

“That’s why we lost today, because we lost the special teams,” Hertl said. “Especially against a team like that, you just have to score some power-play goals.”

Bednar said Friday morning he will no longer give out his line pairings before a game.

“I don’t feel like I should be giving San Jose extra time to prepare — or any team for that matter,” Bednar said. “Just going to have to wait and see at game time.”

Sharks left wing Ivan Chekhovich made his NHL debut Friday. A seventh-round pick by San Jose in 2017, the 22-year-old started the season in the Kontinental Hockey League before joining the San Jose Barracuda of the American Hockey League. Chekhovich said he was so anxious for his debut that he could barely sleep.

Sharks LW John Leonard was a scratch to give him some rest. ... Avs D Ryan Graves suffered an upper-body injury early in the game and didn't return. Bednar had no update. ... Colorado is 8-0-0 on Fridays this season. ... The Avs got their 1,000th win since moving to Denver in 1995.